Yet another way home (Howard Street to Montgomery Ave to Cedar to...)

longer version with pics from last month:
one of my usual ways home takes me north on Elm St to arrive at NW Blvd between Pizza Hut and a schoolyard.  There's a painted crosswalk here with concrete islands in the middle that offer a little refuge halfway across. 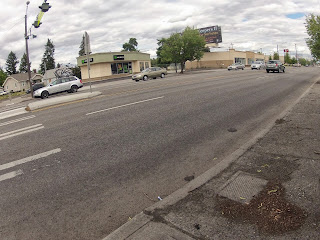 I try to hang back here and wait for traffic to clear in both directions before crossing, but I get impatient sometimes.  I'll get my front wheel close to the curb to encourage cars to stop; or start across when the eastbound traffic is clear but westbound isn't. But then one car will stop, the other lane will keep going, or drivers will slam on their brakes because the car in front of them stopped and they weren't expecting it.  (It's like this crosswalk appeared overnight.) So I try to avoid that.

I rode home from work with my wife a few times this summer, and she didn't like to cross here. So she found us another way. To avoid NW Blvd, I some times go up Howard St and Post all the way to the hill below Garland, then go over to cross Monroe by Skippers, but traffic can be heavy there also. There's no stoplight for a long stretch on Monroe to break it up. There is a light just a some blocks north of NW Blvd/Indiana but I could never remember what street it is, and I usually couldn't find it from Howard.

Debbie found it - it's Montgomery, and it turns out it offers an easy way to cross Monroe and get to Maple/Ash. 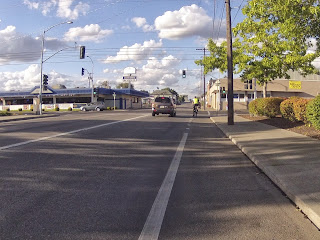 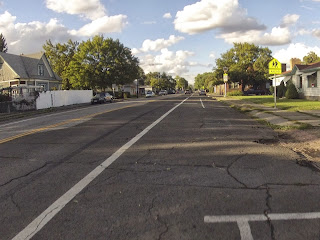 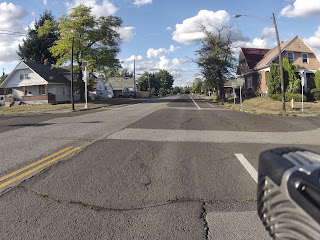 Two blocks to Post.  I have to be careful here because the stop sign is hidden behind tree leaves. Approaching the intersection the first few times I missed it and just thought it was another uncontrolled lightly used street; but it's a North/South arterial. 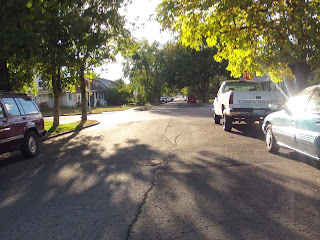 Keep going until Monroe.  I think a bike will trigger the stoplight sensor in the street here, but I usually go over and push the crosswalk button just in case. It doesn't seem to help. Either way it's a long red light on weekdays. 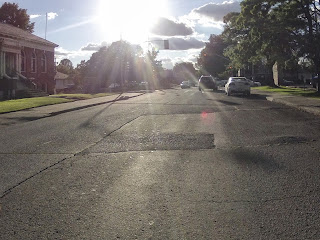 Stay on Montgomery until Trinity School/Church and turn right on Cedar: 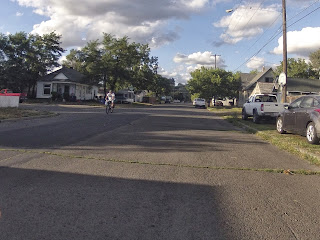 Left on Grace:
This route trades crossing busy 5 lane NW Blvd, for crossing busy 2 lane Maple & Ash. It's another opportunity to learn patience.  Which is difficult for me, but I'm getting better at it. Just wait for traffic to clear. But damn the arterials in town are all designed to keep vehicle traffic flowing, and not for motor and human powered vehicles or walkers to cross. 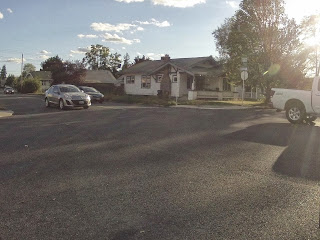 After the One-Ways, I'll head up Nettleton and then take my pick of the dozen or so ways to get home in the west Shadle neighborhood. Usually turn left onto Dalton to cross Cochran & Alberta. 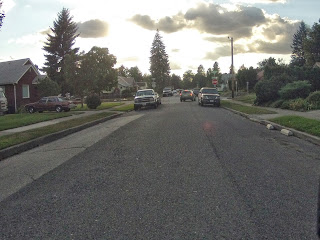 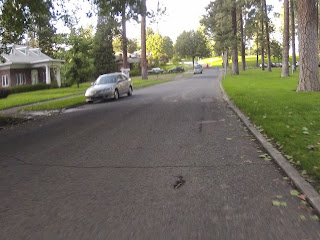 The only thing I didn't like at first about this route were all the uncontrolled intersections on Montgomery and Cedar.  I don't know why it bothered me as it's not much different than other routes around town in that regard.