Well I guess I better write something, Part 2

A few years ago Debbie and I vacationed in San Fran and rented bikes to ride across the bridge. The rental place featured Marin bikes. I don't know where Marin bikes place on the Great Bicycle Brand Scale but there was something different about this bike: it was easy to ride compared to the green monster Huffy. It helped that all the gears and both brakes worked and the tires were worn smooth.. 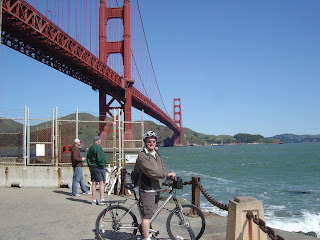 We made it all the way across the bay to Tiburon and visited Schoenberg's Guitar shop (one of the best acoustic guitar shops ever. guitar nerd heaven). We hit a head wind about 10 miles from Tiburon that no one at the rental shop warned us about. The bike map said it was some 20 miles away, but the GPS unit said we travelled 60 miles! I think the unit was tracking all the back and forth we were doing getting blown sideways by the wind.

So when we got back to Spokane, I swapped out the knobby mtb tires on the Huf and it made the commute a bit easier. It being Bike to Work week, River Park Square had bikes from different shops on display. I spied a Novara Buzz V from REI and it said "I'm your new bike". But it was like $300 -$400. I'm cheap.  Long story short: after shopping around I ended up with a Marin Muirwoods 29er for about $300 more.  It was tough to spend more $'s at first, but then a friend said you couldn't get a decent bike for under $1,000. He might be right, but the Muirwoods is a perfect commuter bike.
Posted by Wileydog at 10:06 PM No comments:

Well I guess I better write something, Part 1

Hi my name's Scott and I'm somewhat of a bike commuter. How'd that happen?

I moved to Spokane from a small town of 5,000 about 20 years ago, and went from someone who rode his yellow Raleigh Record 10-speed bike all the time to just an occasional biker. I'm not sure why, but it was probably a combination of being unnerved by all the traffic whizzing by and some laziness.

About 10 years ago I worked with a guy who rode to work from the NE part of Spokane to our office near downtown. I talked to him about it and he didn't seem to think it was that big of a deal. I thought about doing it and thought about it, but never took the plunge. ( I can think about things forever).  I also noted my friend didn't seem to be in that great of shape, (now people can say the same thing about me!) but was impressed he did ride.

Finally, I don't know what got into me, but about 4 years ago I did it. Rode the old Huffy mountain bike to work. I have some strange MS-like disease that affects mostly my left leg. I needed exercise, but the weakness in that leg was keeping me from running so biking seemed like a good idea. I rode that Huffy the 4.5 miles to work and even though I could barely walk after making it downtown, I kept it up that first year and rode to work 3 times a week. I started late in the year, probably in April, and rode into October. It was a good start. I was an Official Part-Time Bike Commuter. Well, ok, me and the bike took the bus on the way home mostly, but still, it was a start. I had found a good route to work that was a mixture of riding on busy streets and cutting through quiet residential sections. It was fun!

Many of you bikers/cyclists know the next part of the story: my wife and I discover there are better & easier bikes to ride that are worth the money. No more buying a bike at Kmart or Walmart!
Posted by Wileydog at 3:45 PM No comments: