Ok I did the Starcrossed cyclocross race (http://www.starcrossedcx.com/) at Lake Sammamish State Park near Seattle last week and it's official: I'm the slowest 'cross racer in the Pacific NW!! I did pass a few guys - they had crashed. But it was fun and there's been some improvement over last year. And I didn't do a "Joey"!
Posted by Wileydog at 12:53 PM No comments:

Some pictures from the Midsummer Cross race in Roslyn, WA 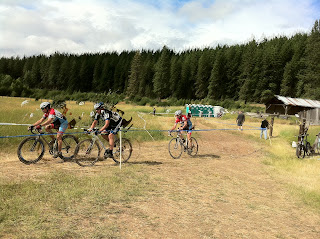 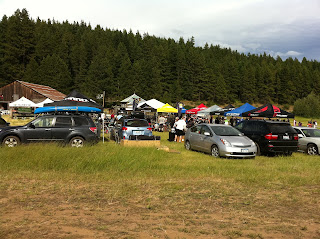 ...can be a pain. Once the traffic clears in one direction, it starts coming from the other. Like other bike commuters coming from downtown going north, I go up Belt and then cut over a street and arrive at the Blvd between Jitters Java and Chase bank. Sometimes I get brave and jet out to the middle suicide lane and wait for a break, but usually I wait (sometimes for ages)or I tool down the sidewalk until I can make it across. I always feel funny riding on the sidewalk, especially going the wrong way. But apparently it's legal in Spokane.

Sometimes I make it on the sidewalk down to the intersection w/TJ Meenach and that presents another problem. The traffic coming up the hill turning right isn't looking for anybody walking or biking from the right, so I don't like to go that far. If you do cross in front of the right turn lane, then you're in perfect position to slip in the front of northbound traffic and cross there. I've done it a few times after i spotted someone else doing it, but there's not a lot of room to fit a bike between the cars and the curb. Too close for comfort.

The easiest way actualy is to ride home north on Maple (or Ash?). The city made the right hand lane wider on both Maple and Ash for business parking and this serves as a defacto bike lane. (The only place anybody parks in these lanes is down by the MaxwellHouse Tavern.) You can cruise easily on the one-ways on a bike. Traffic does back up at the stop light at NW Blvd, and the lane narrows there also, so you have to be careful if you snake your way between the cars stopped at the light and the curb. Probably the reason I don't use this route more often is I feel like I'm breathing in too much exhaust.

Another option is to go north on Elm or Oak and arrive at NW Blvd by the Pizza Hut. Then you can cross at the crosswalk by the school. Drivers usually stop for pedestrians and cyclists there, plus there's a divider in the middle of the street if you can make it only half way across.

Those are the main options to cross NW Blvd. But there are other ways to get from downtown to the Shadle area that don't involve crossing NW Blvd. More on that later (like next time I remember I have a blog).
Posted by Wileydog at 10:05 PM No comments: