it's a foto dump woo hop! 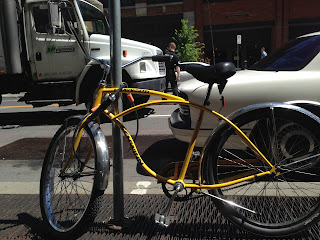 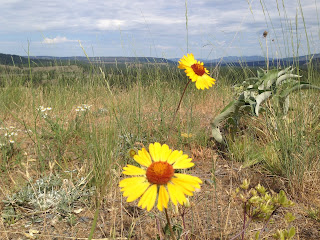 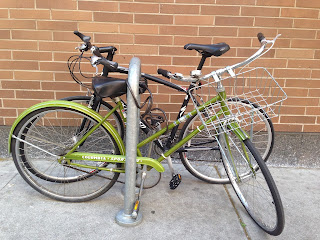 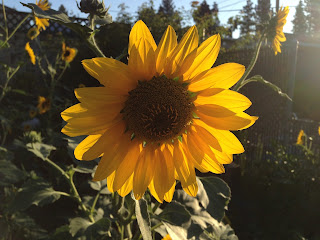 In the previous post, I said how I thought where Euclid dead ends, it looked like there were some dirt trails that might lead back to Riverside State Park.  Well, I was completely wrong about that, and in fact I'm not sure what I was looking at on google.  But once I figured out Euclid went further than Hayford Rd, I had to go check it out.

This time I skipped Rimrock and took Houston to Grove then up Mission. Then Old Trails again, and about a 1/2 mile or so after it crosses Trails Rd, I took a left on Euclid. 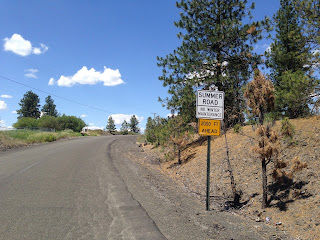 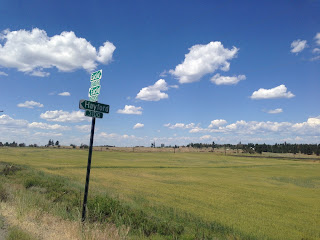 a wave to the Amtrak 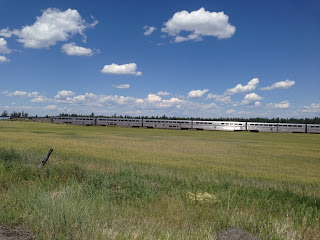 and a short jaunt on paved Euclid, a left at Lyons/Eucid just after the train overpass and it's back on gravel Euclid. 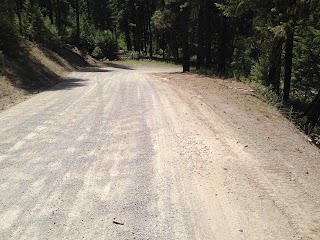 Euclid reminded me of Belsby Rd out by Williams/Rock Lake area as it's a descent down to a creek, this time Deep Creek.  Euclid isn't quite as scenic as Belsby, but still nice.  There were some homes, and I could see the appeal of living out there.  Until we needed groceries or beer.  Would make for a good long bike commute.

At about mile 10 I arrived at Rambo Rd and turned left on it for a short jaunt, then right on Euclid again continuing on gravel.  It's a little tricky following the road signs, and at about mile 11.5 I inadvertently turned right on Gordon Rd. I don't really remember having an option, but Euclid goes a bit further before dead-ending so it's just as well.

I continued on thinking I was still on Euclid until the road ended at Jacobs Rd and was perplexed when the road sign said I was on Dover.  I rested at the fire station there trying to get my bearings.  I finally saw a little corner of RSP on the garmin and figured if I turned right on Jacobs, I might run into Riverside off Garfield Rd.

A little bit after 15 miles, Jacobs Rd ended in front of somebody's yard. But there was a rough dirt road that continued on. I looked around and didn't see any no trespassing or warning signs…and said what the heck looks ok. 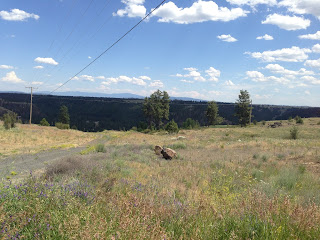 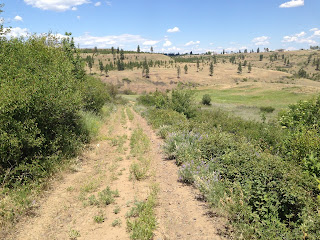 Finally came out to Garfield Rd, turned around and saw the road I just came down was posted.  Well, heck, oops. Part of me wants to think the surrounding land is private and the road is public…but I'm probably wrong about that so can't recommend going this way. 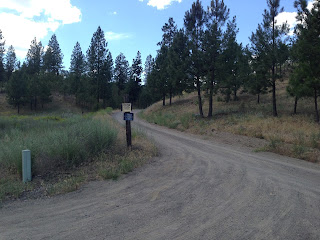 But at least I knew for sure where I was now, and that there was a little parking area up ahead for an entrance to Riverside and a trail that leads to…you guessed it Trail 25!

Then I was on 25, familiar territory you would think, but it's been awhile since I've been on this section.  After a little bit there was fork and I couldn't remember which way to go. Maybe I was low on electrolytes or something. 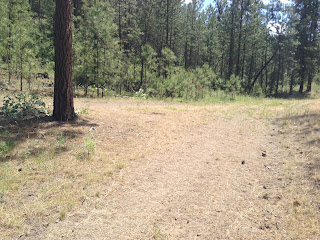 I went right.  Which was wrong. Came across a tree with both a park boundary sign and no trespassing sign on it and an open gate.  Then I was in somebody's back yard all of a sudden.  Great, maybe trespassing again. Probably should've turned around but I was getting tired at this point. I got off my bike, and skirted what looked like the edge of the property to their driveway. As luck would have it, a car started up and pulled out.  I waited, we waved at each other and they drove on by.  Maybe they're used to lost bikers coming through.  I rode a couple hundred yards to what turned out to be Newkirk Rd, and then suddenly there was tall chain link fence with razor wire on top and I wondered what the heck?  And then Air Force signs.  Where am I?  For a second I wondered if I somehow rode to the other side of Fairchild, but knew I didn't go that far. Anyway some type of Air Force installation out there.

So back to the garmin and phone trying to figure out how to get back home.  Thought about going back  toTrail 25 but didn't want to go back through somebody's yard so headed down Lyons, then back up to Newkirk until I hit Old Trails again.  The section didn't look familiar  riding the other direction that I'm used to, until I saw a familiar sign at a residence - "Welcome to Stickyass Acres - and I knew where I was.  I was tired by then so I took Trails Rd for a quick ride back to Centennial trail and Trail 100.

I was thinking of doing a Twilight Tune-Up for the Midnight Century and this loop would work perfect if I follow Trail 25 instead of heading up to Newkirk.  Well, it'd be perfect except for the end of Jacobs Rd possibly trespassing part.  Been searching for a way around that without having to ride on paved Rambo Rd to get to Garfield.

Here's the garmin for this ride.

A couple weeks ago I had a few days off, and I set out on the Trail 100/Houston Rd/Old Trails loop I like to do.  There's a few variations, but a basic version goes like this:

start Trail 100 at TJ Meenach, connect to the Wright Military Cemetery via Centennial Trail, cross Gov't Way and head up Houston Rd (paying your respects at the Dead Volvo Corner), left onto Rimrock through Palisades Park, right onto Greenwood, right on Grove, left on Deno, left on Mission, right on Old Trails Rd, then left on Trails Rd (Hwy) for short distance, right back onto Old Trails. Take that until it becomes Inland Rd and Trail 25 crosses it by the corrals; go right on 25 until it crosses the Centennial Trail into the Equestrian trail. Take Centennial back to Trail 100.

Garmin for that version is here, and a few pics:

As I looked at the garmin map after the ride, I discovered something I hadn't noticed before:  Euclid Rd, a summer road off to the left of Old Trails after it crosses Trails Rd, doesn't end at Hayford Rd like I thought, but continues on into the Deep Creek area.  It dead-ends, and I thought I saw some trails that would lead back to Riverside State Park.  Of course I had to go check it out a couple days later. Which will be detailed in Version 2 shortly.