I'd been thinking for awhile about replacing my Lazer Armor helmet, seen here on the train to Seattle: 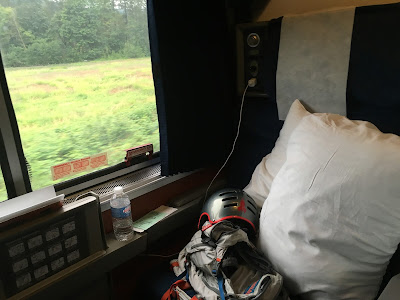 I'd lost the inside padding strip earlier this year  - it attached with small velcro tabs that didn't hold well - so it was a bit uncomfortable.  Also, the helmet doesn't come equipped with a visor and I don't like the feel and looks of a biking cap under a helmet (I know…). Even though I just bought it last year I was looking at new helmets, and the Bell Annex caught my eye. It's MIPS-Equipped and has a sliding vent to either let air in or keep the elements out.  Cool and dorky looking!

Little did I know that within two days of the above pic, the Lazer helmet would disappear.  I was riding the John Wayne Pioneer Trail with the helmet perched on the back of my bike like so:

and somewhere between Lake Easton and the Hyak Trailhead, I lost it.  I figure I didn't get the helmet straps hooked around the tent straps, or I set it down to dig through my panniers for a snack and forgot to attach it back on the bike.

Well that worked out pretty good and now I was free to get a new helmet. (I do have a couple Bern helmets also but the summer liner/visor for one had worn out.  When went to order a replacement I found Bern had changed their sizing and didn't have a direct replacement to fit mine.  I ordered one anyway, but it turned out to be too tight.) 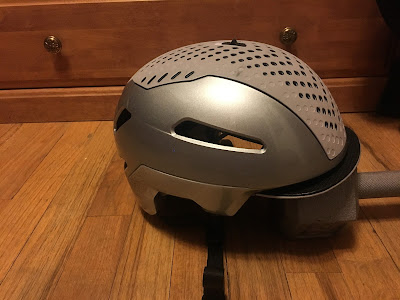 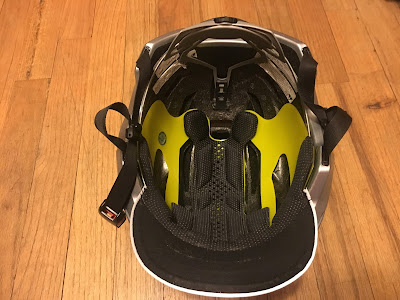 The little knob on the top slides the vent open and close.  The padding inside detaches if you want to let more air in.  The fit and feel of the Annex is much better than the Armor but the Armor is less expensive at $70.  The Annex is heavier but not too bad.  On days when the temperature is in the 90's, I don't think the vent really helps much but other days it does cool my head more.  When it's in the upper 90's I may tend to ride with just a hat on the way home anyway.  The visor is a little short and doesn't help much when the sun is at a lower angle.  Overall, I really like it.

Posted by Wileydog at 9:36 PM No comments: