As I mentioned in my previous post, Summit Blvd/Boone to TJ Meenach Trail Slight Return, I had checked with the city on the status of the Summit Gap project. They got back to me, and since then an update was posted 30 Nov stating there was a delay and they were waiting on WSDOT approval with the project expected to go out for bid mid-December. I just checked the city’s Current Projects Information page and the call for bids went out for the Centennial Trail - Summit Boulevard Gap project with bid opening set for 11 Jan, 2021. 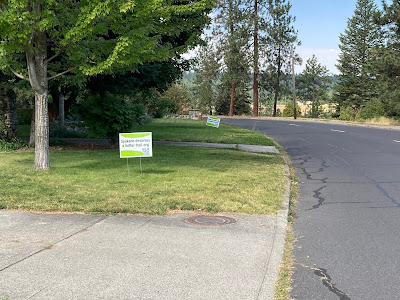 Judging by the numerous “Spokane Deserves a Better Trail” signs along Summit Blvd, many folks are opposed to the project. They want a better trail, meaning one going down the ridge, crossing the river on an old pipeline bridge instead of connecting to Pettet Drive through their neighborhood. That alternate trail project, if ever completed, would be at least 5 years in the future and probably more. I think the project along Summit Blvd and West Point, using the same route that existing trail users use today to go from Summit Blvd/Boone Ave to connect with the Centennial Trail at Pettet Drive, will be a good off street improvement, closing one of the major gaps in the almost 40 mile long Spokane River Centennial Trail. Making it a better trail.

Posted by Wileydog at 6:39 AM No comments: