Well, I finally did it. My 2013 Vaya has clearance for 700c x 38 with fenders and 700c x 42 w/o and I wanted a little wider tire. Despite not being completely sold on the 650b wheelsize, I watched that Path Less Pedaled video again on converting their 2013 Vaya and ordered an inexpensive wheelset.

BEFORE I GO FURTHER, I should mention Salsa says don’t do this, the bike was not designed for 650b. Death or dismemberment could ensue.

In the meantime, my left shifter paddle was broken and the 11 x 42 cassette I put on last year wasn’t shifting the greatest with a derailer spec’d for 36t max. I was tempted to wait for a nice new orange 2020 Vaya with 11speeds and clearance for 700 x 50c. I love this Vaya and wasn’t going to be able to sneak a bright orange bike into the garage so I ordered new Apex shifters and an FSA MegaExo 46 x 30 crankset. Gonna do a complete overhaul, and still get close to the same low gear range using 11-36t cassette.

Because of winter weather, I hadn’t ridden the Vaya for a couple months. Just after I ordered the wheels we had a nice day with clear roads and I rode it to work and the Rockwood Clinic. It handled great with the 700 x 38 GravelKing slicks. Bumpy 4th Ave wasn’t too rough. I had second thoughts about changing. With the wheels on their way, I was committed to trying 650 now.

The next decision was, how wide of a tire did I want? 42 or 43 is probably enough to smooth out city streets and the occasional off road riding. So I went for the whole hog and went for 47s. Threw a dart and came up with  the Teravail Rampart Light & Supple TR Road Plus tires. I don’t know how they compare to your Compass/Herse tires in suppleness. They were tough to get on the rims which I took to be a good sign that they would stay on. I’ve been riding around on regular rims set up tubeless with Stan’s rim strips without the tires falling off but feel better with actual tubeless rims. One wheel I was able to set the bead with out using a compressor, only a pump.

The tires done, and the rear outfitted with the 11-36 cassette I had, I tackled the next part: changing the crankset and bottom bracket.

In an amazing feat in the annals of bicycle maintenance and repair, not only did I remove the crankset AND bottom bracket all by myself, I installed the new BB and crankset, too. Had two washers left over, a rubber one and stamped metal one, both thin. Took it for a test ride and it worked! Well, mostly, had a little trouble with the front shifting. I hoped that would get fixed when I had a professional install the new shifters. The rear shifting was good, even with the extra links in the chain put in when I switched to the 11-42 cassette. 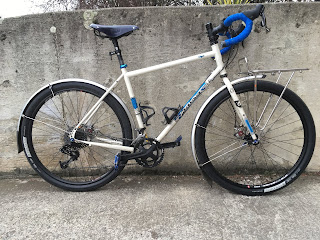 I commuted on the Vaya the next few days, and sometimes I could shift the front gears up or down, and sometimes I couldn’t. Weird. I poked around and found the pedals slid back and forth and I had an extra 1/4 play in the crankset. Maybe that’s why sometimes it shifted and sometimes it didn’t! The bottom bracket directions showed 2 spacers on the right and 1 on the left, but then again an online video installation said they called FSA and were told that was incorrect and no spacers were needed. Not sure which spacers to get, I decided Nigel at Simple Machine Bike Repair could hopefully figure it out when I took the bike in to get the shifters installed. Long story short: he figured out I didn’t need spacers, just those two thin washers installed and everything fit correctly. Didn’t even need a new front derailer.

On my first test ride after everything was done, I took it up Pettet Drive aka Doomsday Hill. Made it up with 3 gears left in reserve. Woo hoo! The Teravail Ramparts roll smoothly and dare I say faster. Could be just my imagination. I’ve ridden them on some gravel roads and dirt trails and they’ve performed great.

The overall diameter of the tires are a little less than the 700 x 38 tires so I lost a little in the top gear, but gained a bit in the lowest gear. The pedals are lower to the ground but this hasn’t been a problem. The only time I really noticed it was riding up the Merkel trail cut into the hillside - I would scrape the hillside at the bottom of the pedal stroke. 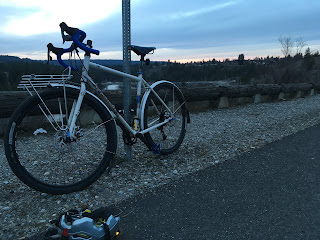 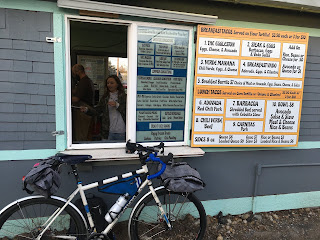 Posted by Wileydog at 8:44 PM No comments: