Shadows on the Trail (JWPT) 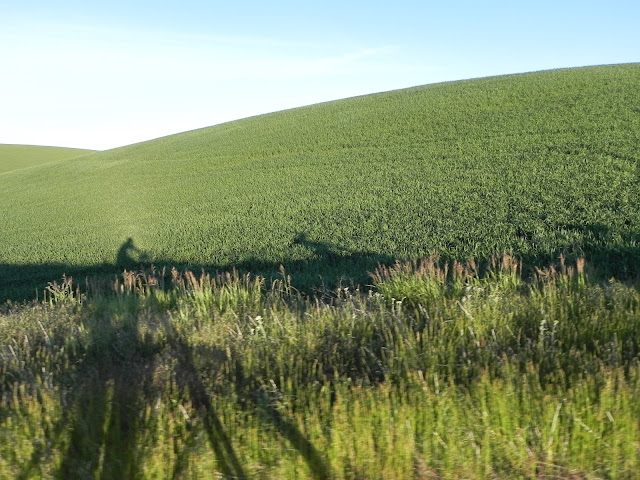 A few miles past Tekoa:  Me, Eric, Pat
Posted by Wileydog at 7:53 PM No comments: 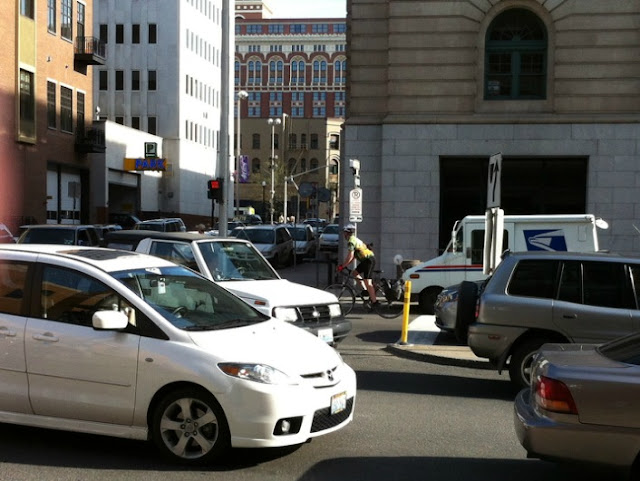 I was waiting downtown at the library last month sometime for my wife to pick me up after work, watching the traffic, walkers and bikers. This intersection is always interesting to watch. Usually, I'm fearing for the safety of people crossing the street here at the crosswalk that's hidden by the two white vehicles in the picture above.  There's a steady stream of cars coming north towards the library and turning left. With a slight downhill, many of them pick up speed just before the intersection. And with two lanes turning left, I'm worried someone in the outside lane won't be paying attention and not notice there's people crossing in the crosswalk.

It's hard to tell, but the cyclist in the above picture is in a bike lane.  I had pulled out my camera after watching two cyclists before this one come to a stop at the light here, then weave over to their right in the intersection, then weave back over to their left and back into the bike lane after the intersection. I try to be tolerant of other bikers practices, but I hate to see people weaving back and forth as they ride. I know they think they're safer if they move over in the intersection, but I'm not so sure about that.

So I thought I'd try and get pic of the next biker that came through, to get a picture of them weaving over, I don't know why. But the traffic and the this next biker that came through (above, hmmm...he looks a little familiar) didn't cooperate. The biker had stopped behind the wide white line at the red light, but when the light turned green there were vehicles stuck in the intersection, unable to move forward.  He deftly navigated his way through the vehicles blocking his path.  I'm pretty sure if the hulks of steel and plastic hadn't been blocking his way, he would've rode straight through without weaving.

I'm going on a 2-3 day trip this summer on the John Wayne Pioneer Trail thanks to Pat over at 26inch Slicks who has graciously allowed me to tag along part of the way on his cross state tour.

I was planning on taking my mountain bike, until I looked at the frame and fork and said to myself "hey there's no attachment points for racks and panniers"! Duhh! Slight panic ensued. Ok, do I want to haul most everything in a backpack and bungie cord the rest to me and/or bike? Or do I switch the tires on my  Marin Muirwoods? Or take the good cyclocross bike?

No, I want to spend more money on a BoB cargo trailer, which I'd been looking at for awhile for hauling stuff in town.  Long story short:

Of course, I bought the less expensive version without the shock absorber in back so more slight panic ensued. How do I explain to my wife I bought a trailer for the trip, but I can't use it on the trail? (Luckily she is on board with using it around town.)
So I made a quick trip to Rosalia on Sunday to try it out. To simulate some bike camping supply weight on it I packed it with this: 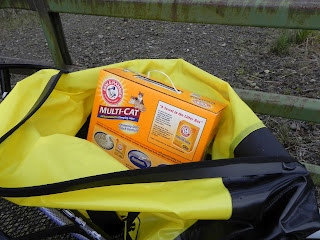 I only went a few miles, but it worked out ok, and was fairly easy to pull, if a bit noisy.  I have a liner on order for it and also a kickstand which should make stopping along the trail easier.

More Pics.
This is the old Milwaukee rail bridge at the south (?) end of town: 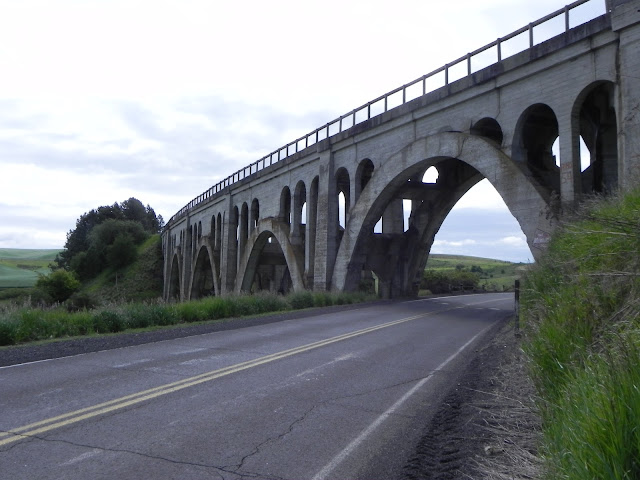 The view from the bridge: 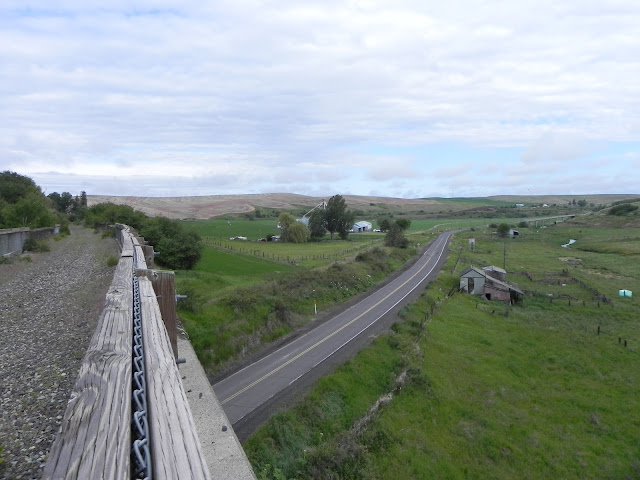 Another pic of the bridge: 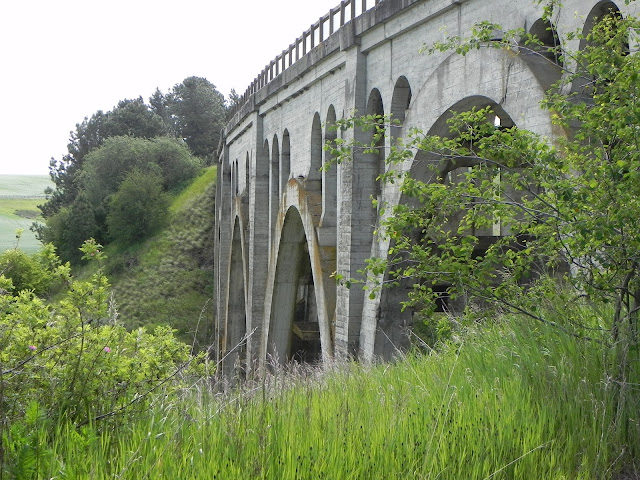 Out on the trail, going around an old trestle: 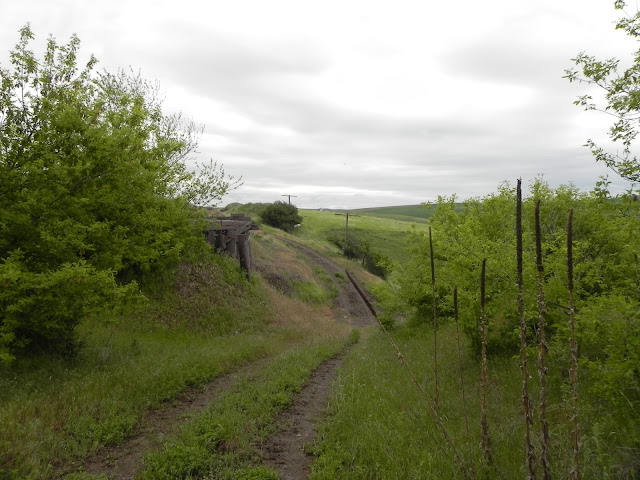 I had first stopped at the other end of Rosalia at the first turn from 195 into town, near the Rosalia Cemetery. This part didn't look very promising, but it's passable: 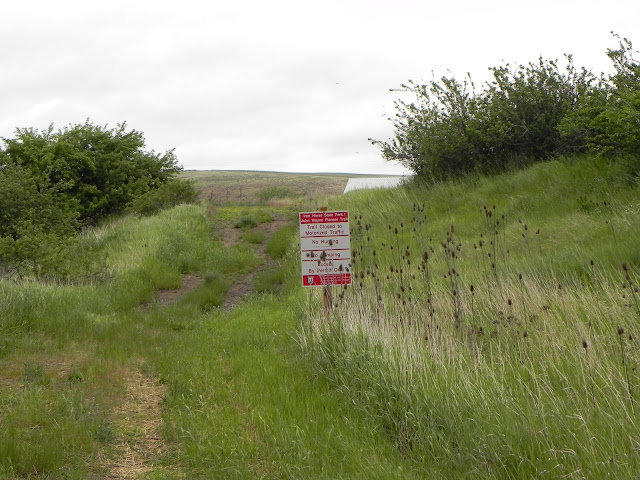 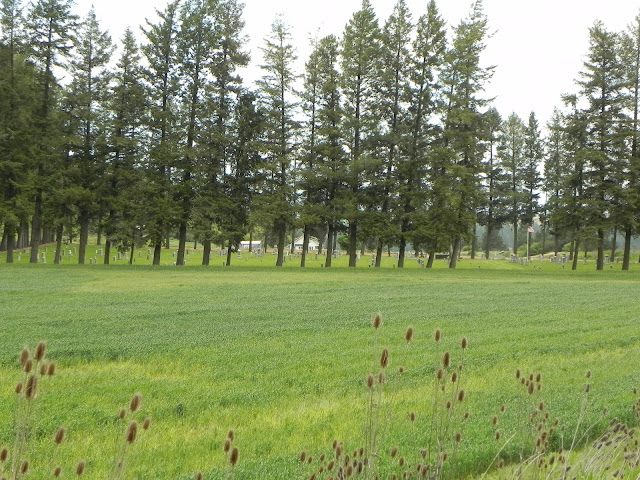 Ok this is a little late, I'm a slow writer. It's also a little rambling.  And no pictures - I couldn't be bothered with that. Well, I left my phone home. Left my Garmin home. Rode my Marin hybrid without a bike computer on it, so I was riding without the assistance of any electronic gadgetry.  Felt funny at first, but refreshing.

Here goes, hold on fast and be sure to tighten your valve stem caps:

My wife Debbie and I rode from our abode in the Shadle area to the Summer Parkways event in the Logan area at Mission Park and Chief Garry Park. It's funny - Mission Park seems far away from our home, but it was an easy 6 mile ride there. We just get too used to going places by car, when it can be so easy to bike to places.

Once we got to Mission Park I was a little confused where to go. Being hopeless with directions, I'd meant to check the map of the Parkways before we left but forgot. We found a nice volunteer at the SW edge of the park who wasn't too sure either, and handed us a map. Luckily, my born and raised in Spokane wife quickly figured which way to go, and we followed the route to Chief Garry Park. We might make a good Amazing Race team.

Discovered there are some nice wide streets to ride on down in the Logan neighborhood. (I know I should fill in some more details about the Parkways, but you'll have to use your imagination or check out the Summer Parkways Facebook page. I gotta get this post finished.)

After the Parkways, I was getting hungry, so we took the Centennial trail down to Riverwalk. Where do we want to eat? There's the Brewery there and a Thai place. Oh, let's take the new MLK Jr Way to downtown, and maybe eat at Madeleine's. Or maybe Rock City. Or head to Indaba, I have my Indaba card with me.  Or maybe eat in Browne's Addition.  I'm hungry and not good at making decisions!  Then I felt like a sandwich from the Brooklyn Deli. Made our way there and didn't see a good spot to lock the bikes up. Felt uneasy about it.  Ok, let's just go to Browne's addition, either eat at the Elk or Pacific Pizza.

Headed west on Second. Debbie's a real trooper. She's just been getting back into riding after tearing her ACL last winter, but was handling the city riding like a pro. We noticed a lot of traffic heading into Browne's.  Suddenly, Debbie yells out "Artfest"!  Oh of course - we'd talked about heading to Artfest after the Parkways. And forgot about it.  That solved the problem of where to eat. We both got shrimp tacos from the Baja Babes truck.

After Artfest we headed down Riverside and crossed the river on the Sandifur bridge by People's/High Bridge Park.  We were both wondering why we decided to go downhill, as we both knew we were going to have a big ride back uphill to get home. We both made it up the twisting hill climb across the river up to Summit drive without stopping. Proud to report I didn't use the ol' granny gear.

From there it was just a few miles back home. According to Debbie's Garmin, it was about 18 miles. A pretty good day, and it followed some good rides on Memorial Day weekend to the Farmers Markets and out to 9 mile.  Which I was going to post about but didn't get around to it.

Anyways, looking forward to the next Parkways on the South Hill. Will we bike uphill all the way there after work from downtown? Can I not get lost?  We shall see.

The 3rd Annual Spokane Vintage Bicycle Swap & Show is coming up next week June 9 at the Swamp, which reminded me I should try to get my old 70's 10-speed into semi-rideable condition. 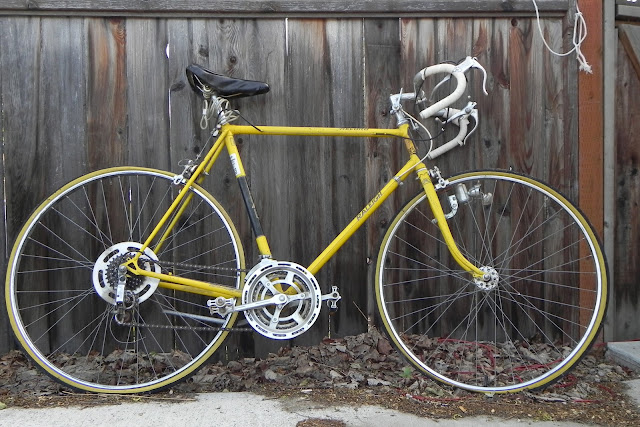 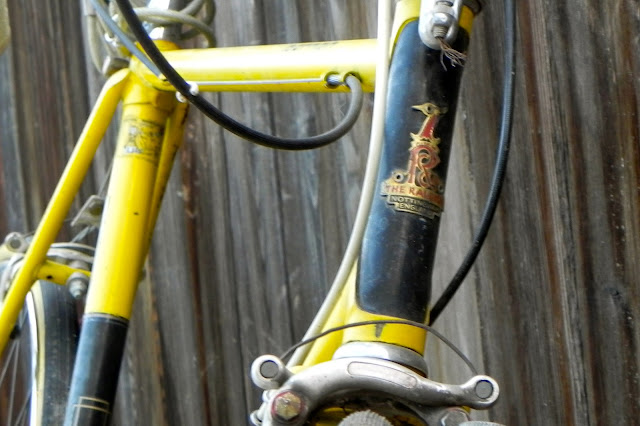 Made in England. I think everything on it is original. I kinda like how the yellow sidewalls match the frame color. I did a quick online search a year or so ago and was a little disappointed to find it was the bottom of the line Raleigh and worth maybe $125 now. But it's been a good bike.
Posted by Wileydog at 10:40 PM No comments: