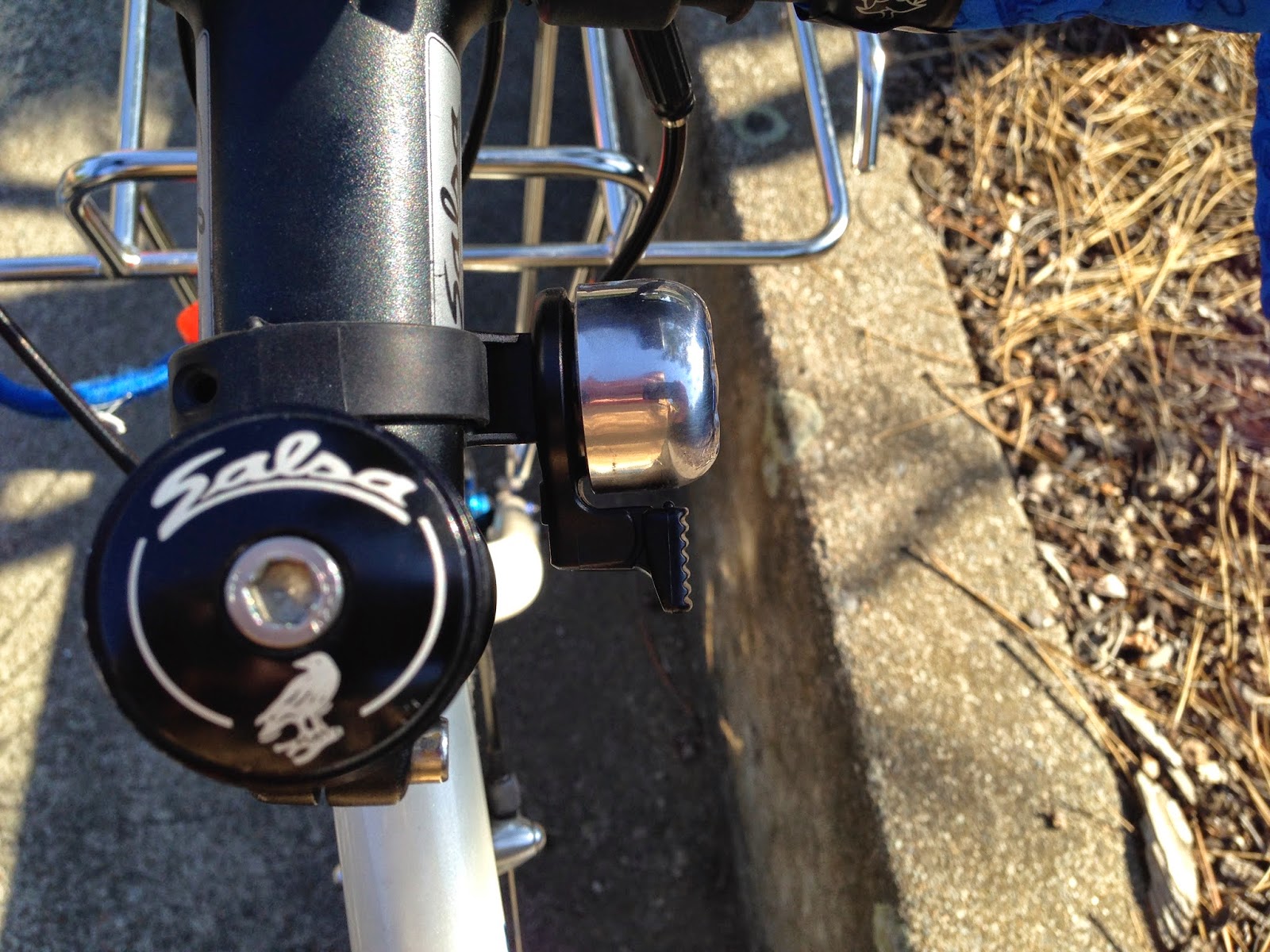 
I cheated and drove out to the Rock Creek Recreation Area last week - postponed a bike overnighter until September.  Maybe August depending on schedule and heat.  On the way down on Jordan Knott Rd passed by the Lamont Grain Growers silo near Revere where Pat, Eric and I re-filled our water bottles a couple years ago on the John Wayne Pioneer Trail. A good spot to remember there's a water hose there.

Here's the Garmin for my ride around Escure Ranch/Rock Creek Area and a separate one for the 3-mile trail from the parking lot to Towell Falls. I explored a couple roads/trails while out there.

Here's plenty of pics of the area: dry, dusty, cheatgrass, a little swampy, basalt - almost everything Eastern Washington has to offer. And hazy sky from the Central Washington fires. 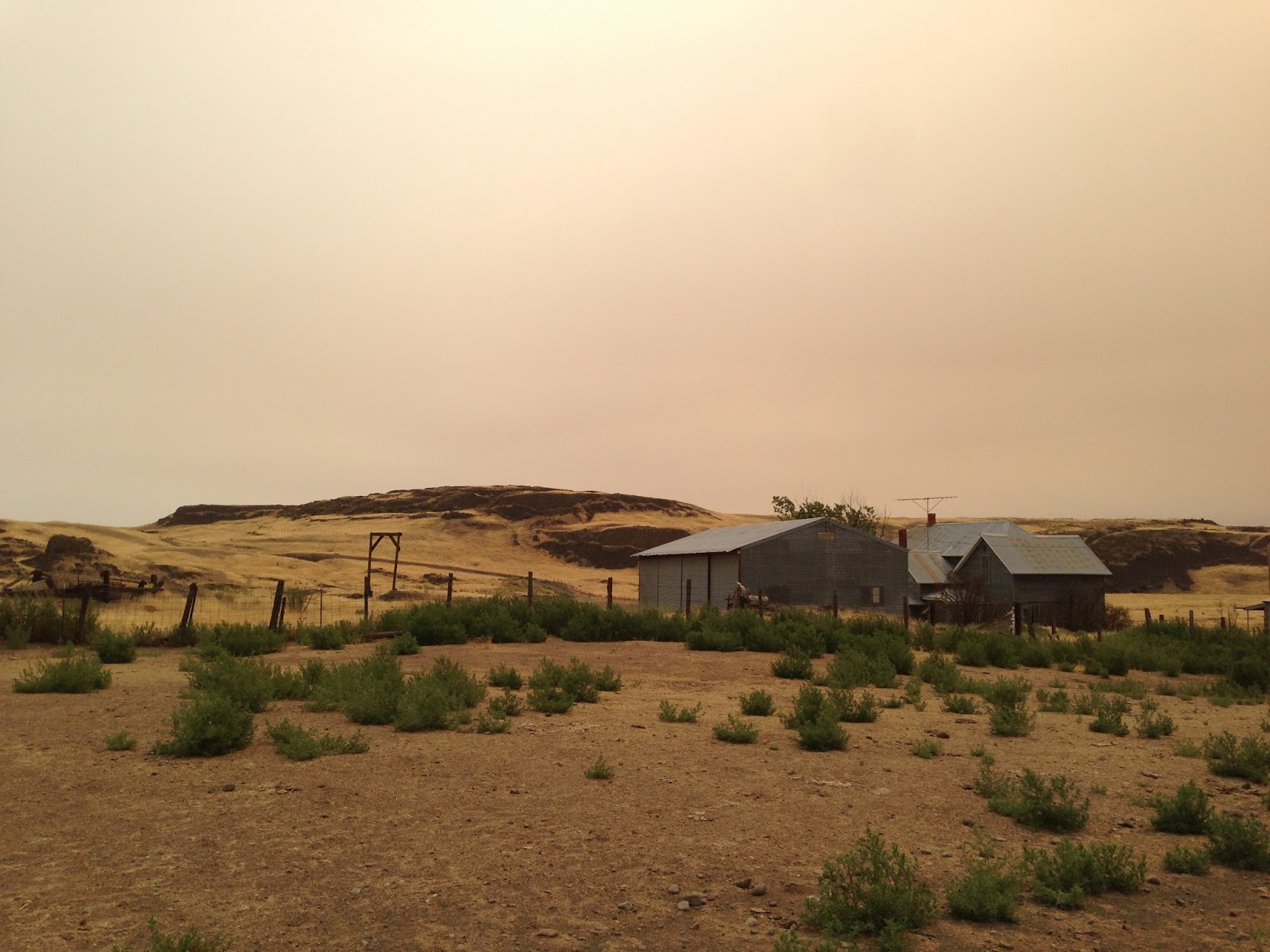 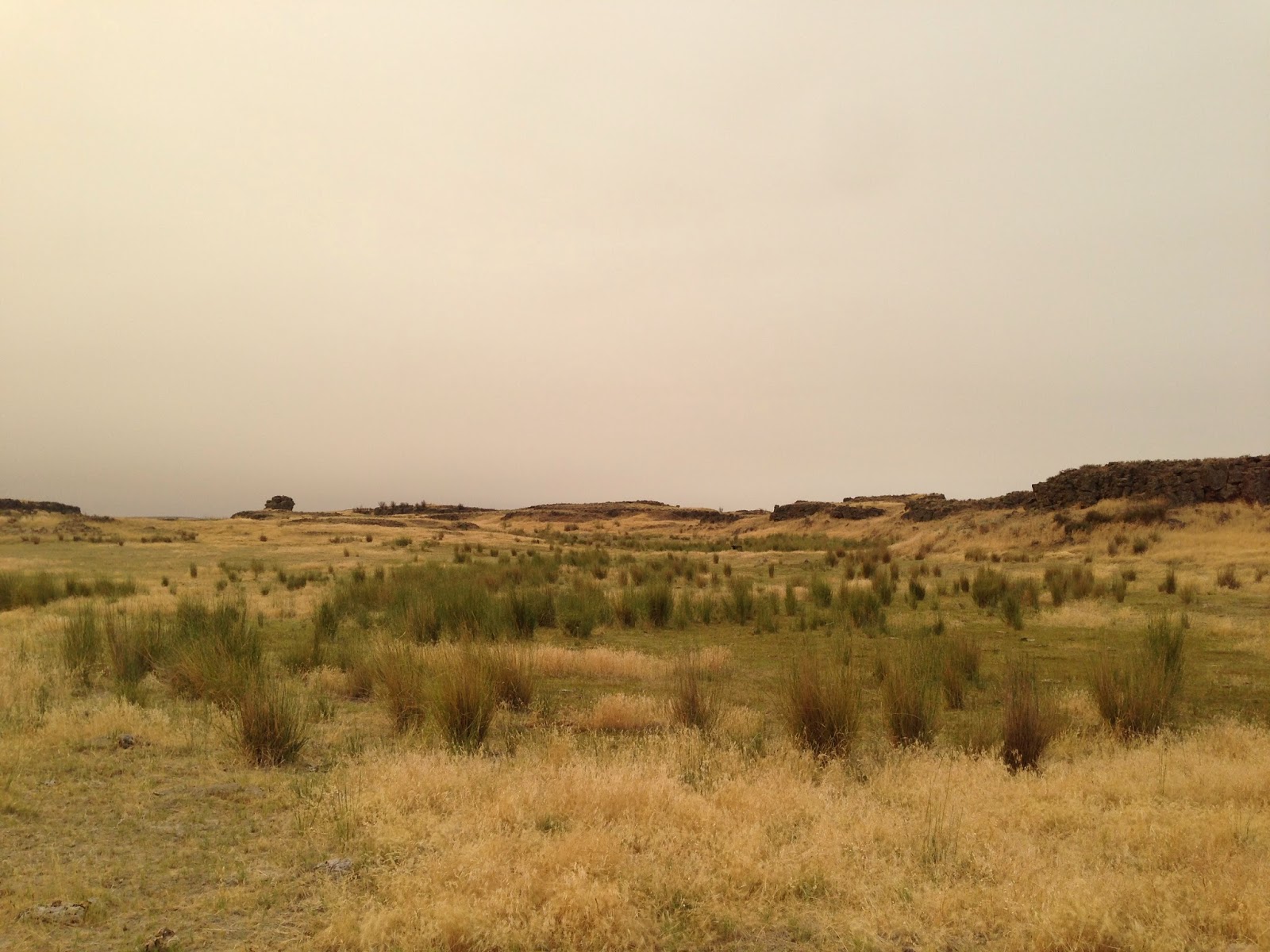 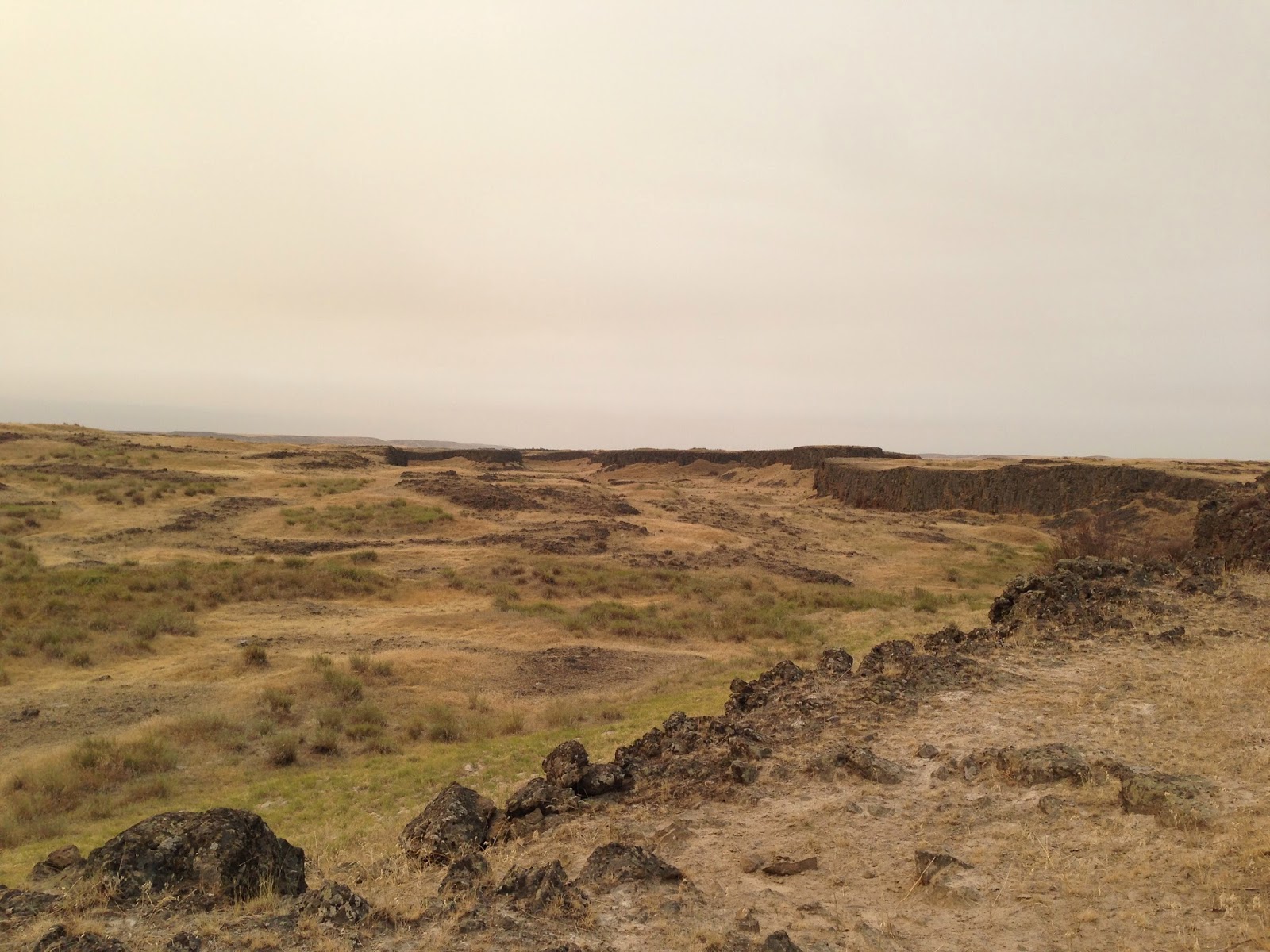 returned to the road, then veered off onto another road/trail 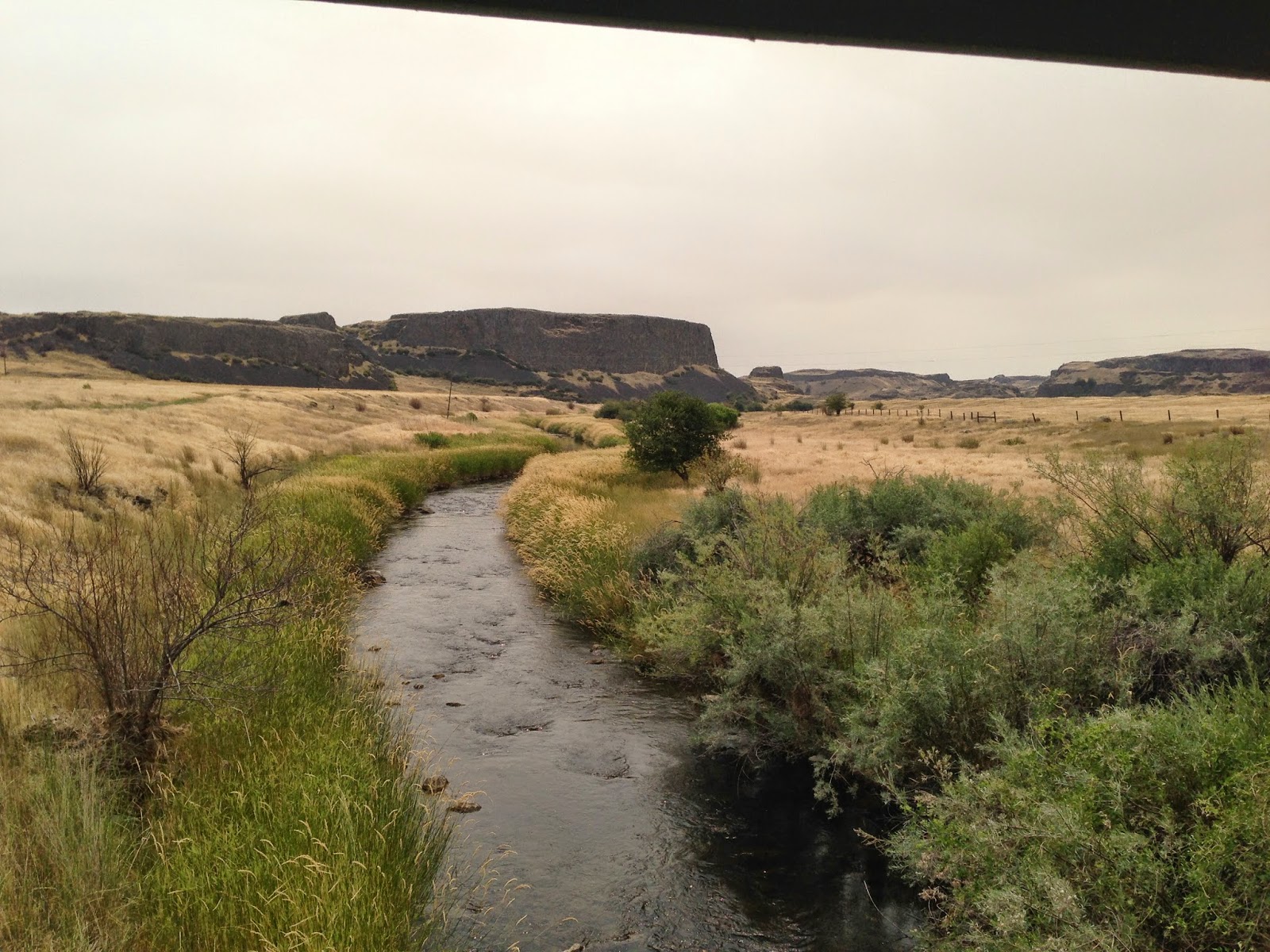 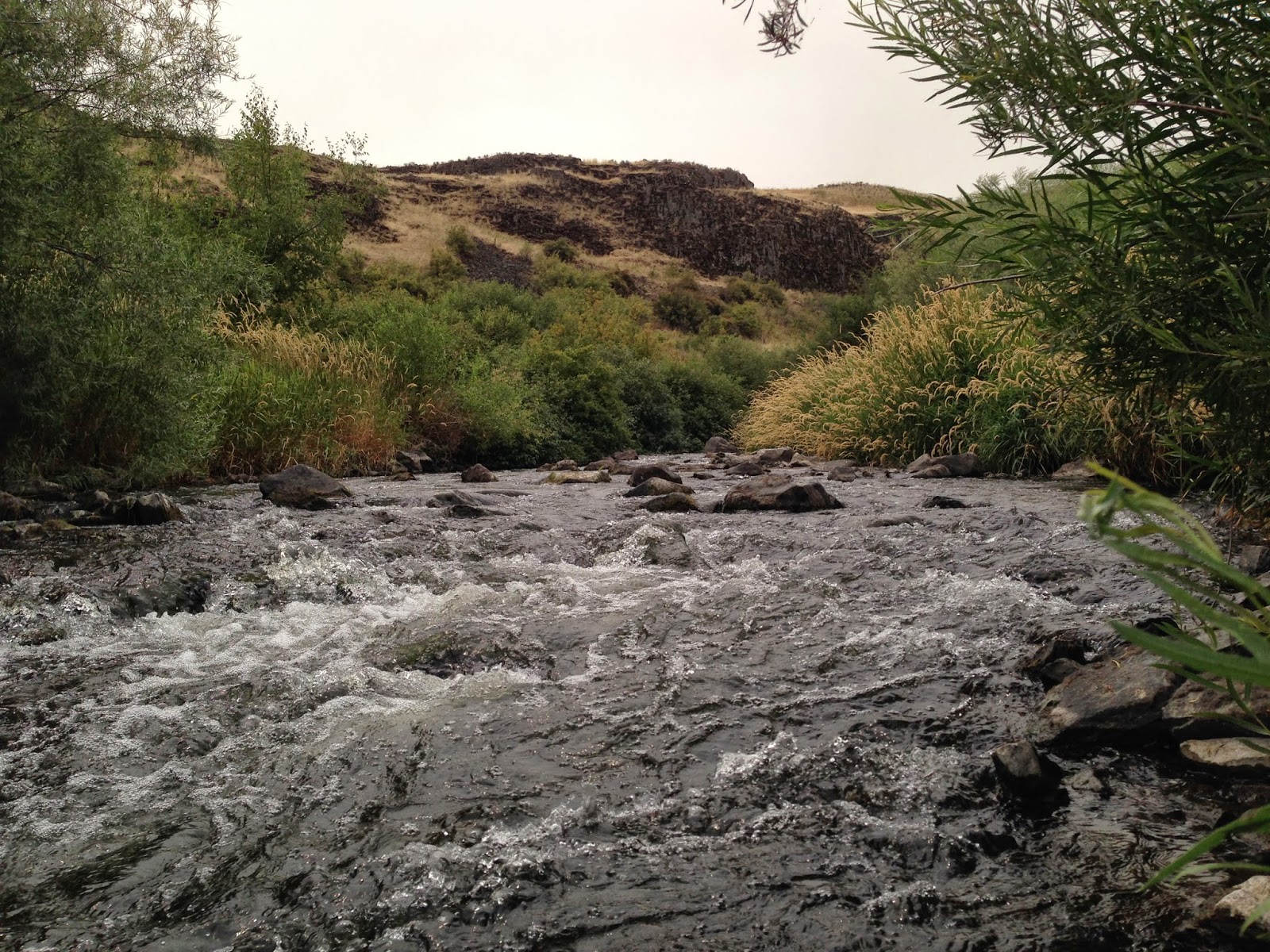 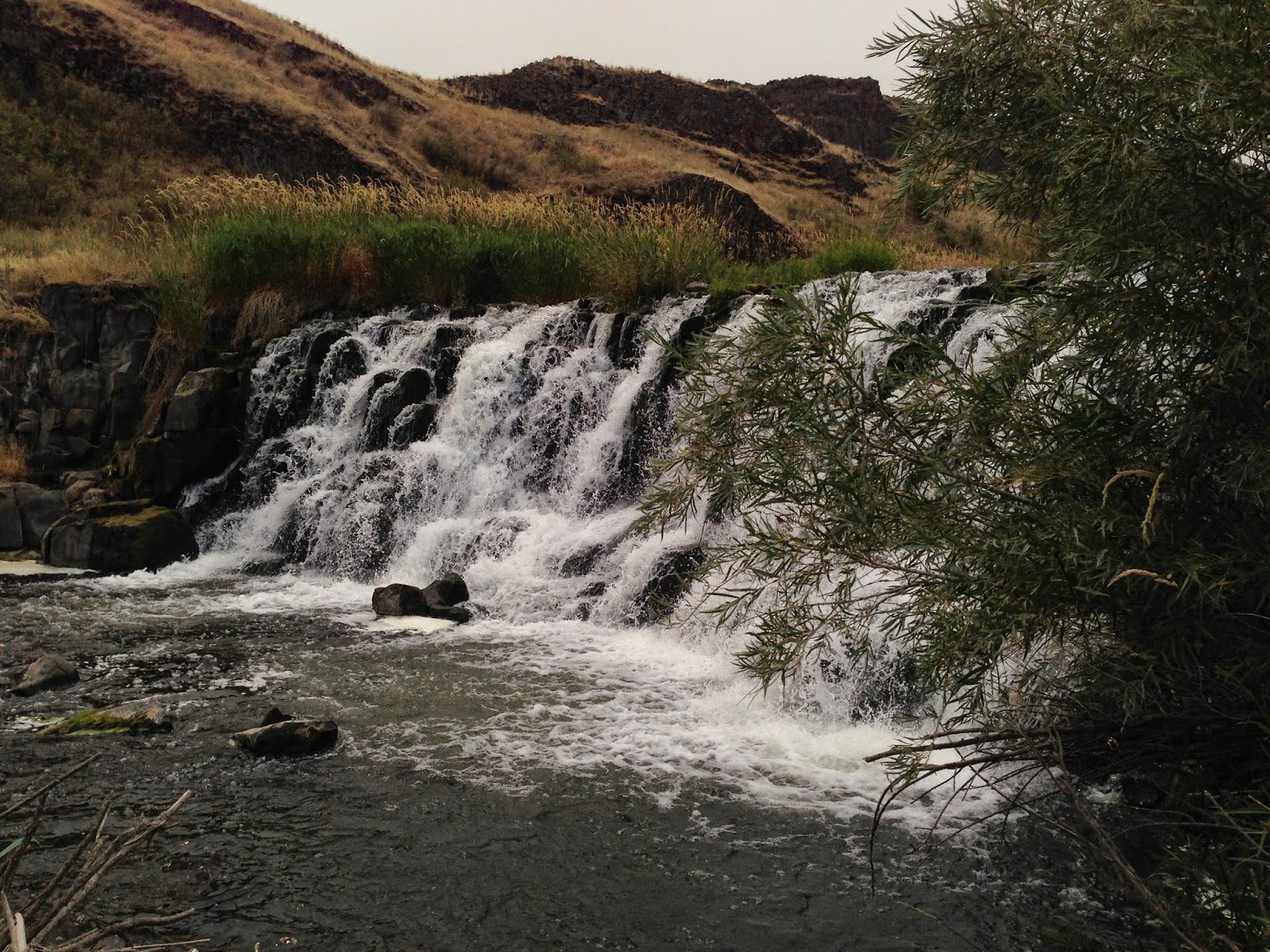 When I got back to the parking lot the fisherman had left so I didn't find out if he had any luck. Haven't fished in years, but interested to find out if the fishing's any good here.  Would make a good addition to the bike camping food.

Will have to return to explore some of the other dry dusty trails.
Posted by Wileydog at 10:01 PM No comments:

biggest shiniest rack I could find 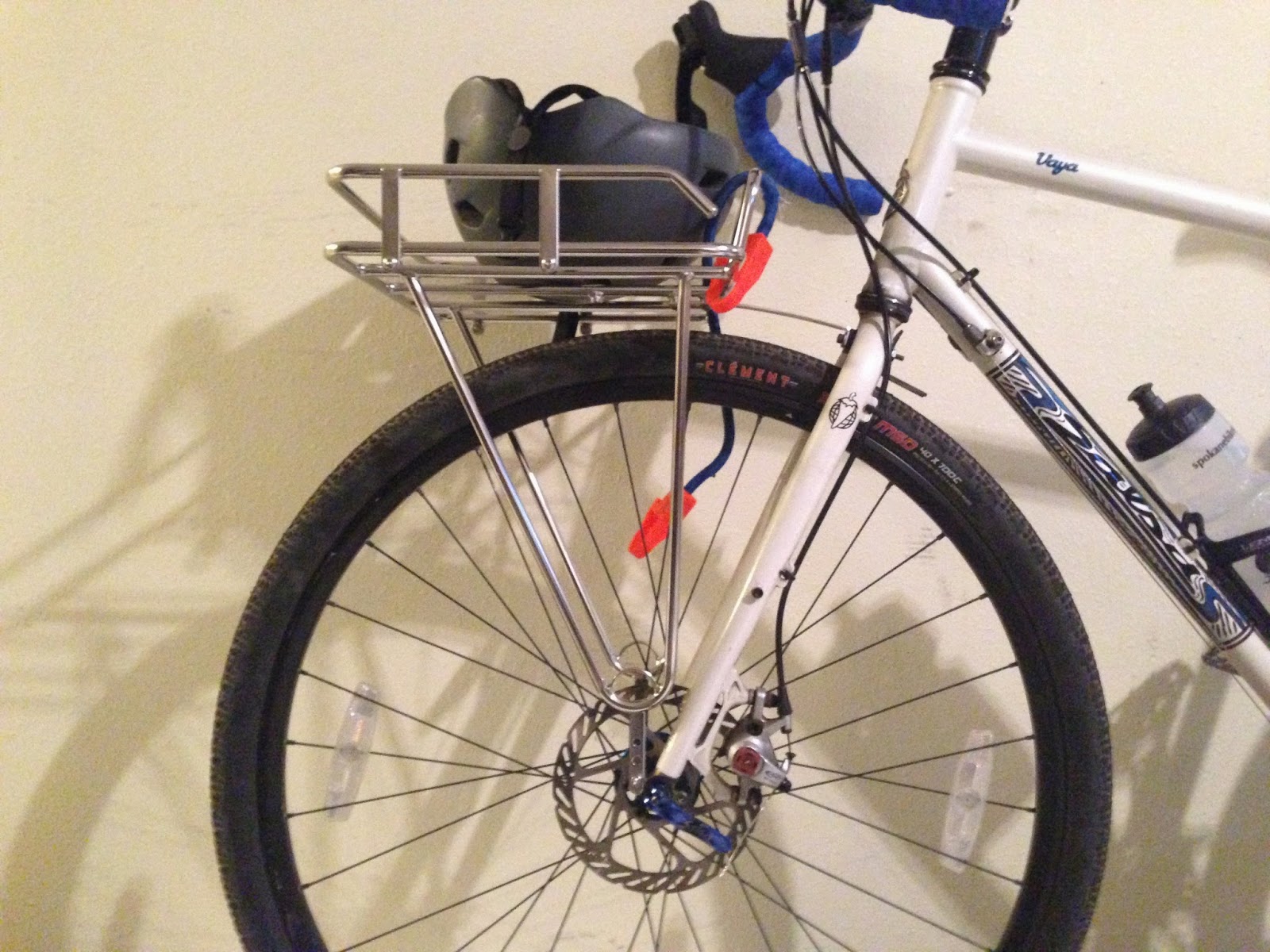 There're a few reasons why I've been wanting a different front rack.  The Racktime Topit is ok but the platform is narrow for my needs. The Orleib panniers were rubbing on the Salsa rack, so I switched to the backpack again. The backpack, though convenient, was bothering my back. And neither the backpack or panniers carry some bulky items very well.

So I went for broke and got the Velo Orange Porteur Rack. Or if you don't like the French word, call it a Freedom Rack. Or pizza rack, since at 14" x 11" it's a good size to carry pizza home (without the fence).

I look at the bike and go yikes that's huge and so shiny! Looks a little out of place, but maybe I just need to get used to it.  Maybe should've gone with the Soma rack which has a basic black option. Think also maybe should've been patient and ordered a 3-rail Cetma rack - something narrower than the Porteur racks, but wider than most other front racks. Second guessing.

It's a type of rack that works best with a low-trail bike, so they say, instead of the Vaya. It reminds me of that insurance commercial - "that's not how it works".

But whaddya know - it works for me.  For now, I'm bungee cording my backpack to the rack, and when I have the load balanced it handles pretty good.  Feels great to get the backpack off my back, especially in this heat.  I like the way the rear of the bike handles without weight back there - the bike is a little more zippy.  The front from handles a little differently - mostly I notice it when biking uphill it feels like I'm pushing a load which I guess is what I'm doing.

I'll see how this slightly expensive experiment goes. It might work out and I won't just have an item to add to the craigslist/bike swap list.

Posted by Wileydog at 7:06 PM No comments:

On the Salsa forum over at mtbr.com I read one post that said the Continental Race Kings that came standard on the 2013 Fargo don't work well set-up tubeless, and another post that said pshaw, no problems. 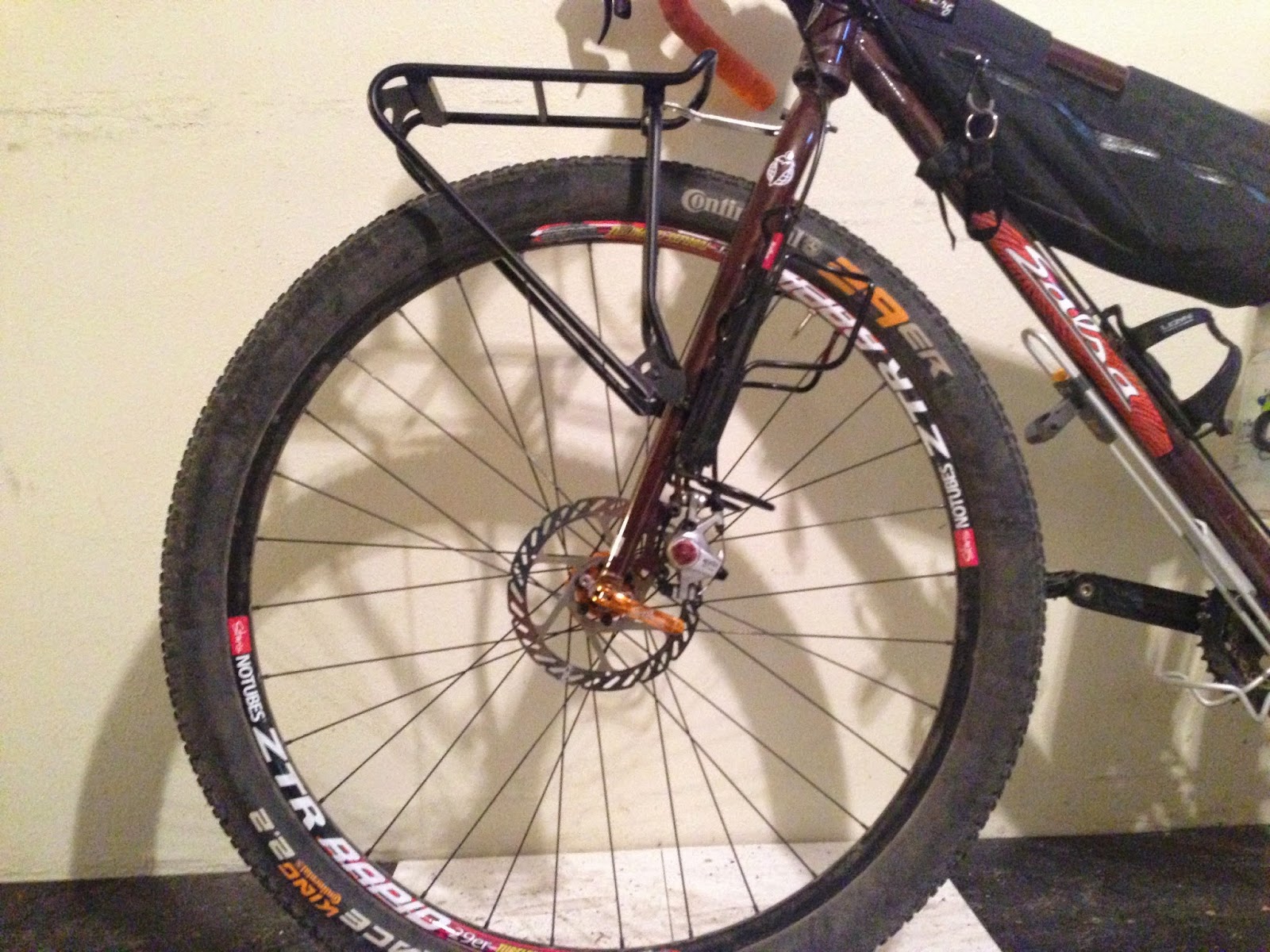 So I gambled and bought the Stan's valve stems and sealant. Since I don't have a presta fitting thingamajig for my compressor, I went back to the Bike Hub downtown and had them set the bead for me. I was duly warned of a good chance of failure using the tubeless rims with non-tubeless tires, and they'd had disappointed customers.  I assured them I wasn't one of those guys.

The tires seemed to set up good in the shop and were holding air, with a few spots of sealant leaking out.  I took them home and had to air them back up a few times that day.  Left them over night and front tire was flat in the morning, but the rear was holding steady.  Pumped about a 1/2 oz. of sealant in the front and it held throughout the day.

This was all in prep for a 2-3 night trip this week down Belsby/Hole-in-theGround Road to the John Wayne trail then to Escure Ranch, but the heat wave got to me.  Maybe later this week.

Took the bike out to Riverside State Park on Monday for a test of the tubeless setup and to see if I could trust it to hold over a multi-day trip out in the boondocks.  Rode over all the worst Trail 25 has to offer - those rocky sections by the river, those rocky sections up in the hills, canyons, everywhere.  Waited to hear the dreaded burping, but nothing.  I think I felt a smoother ride. Worked fantastic and only lost a little bit of air - probably from checking the pressure.

Now I'm looking at those fatbike tires.
Posted by Wileydog at 8:26 AM 1 comment: 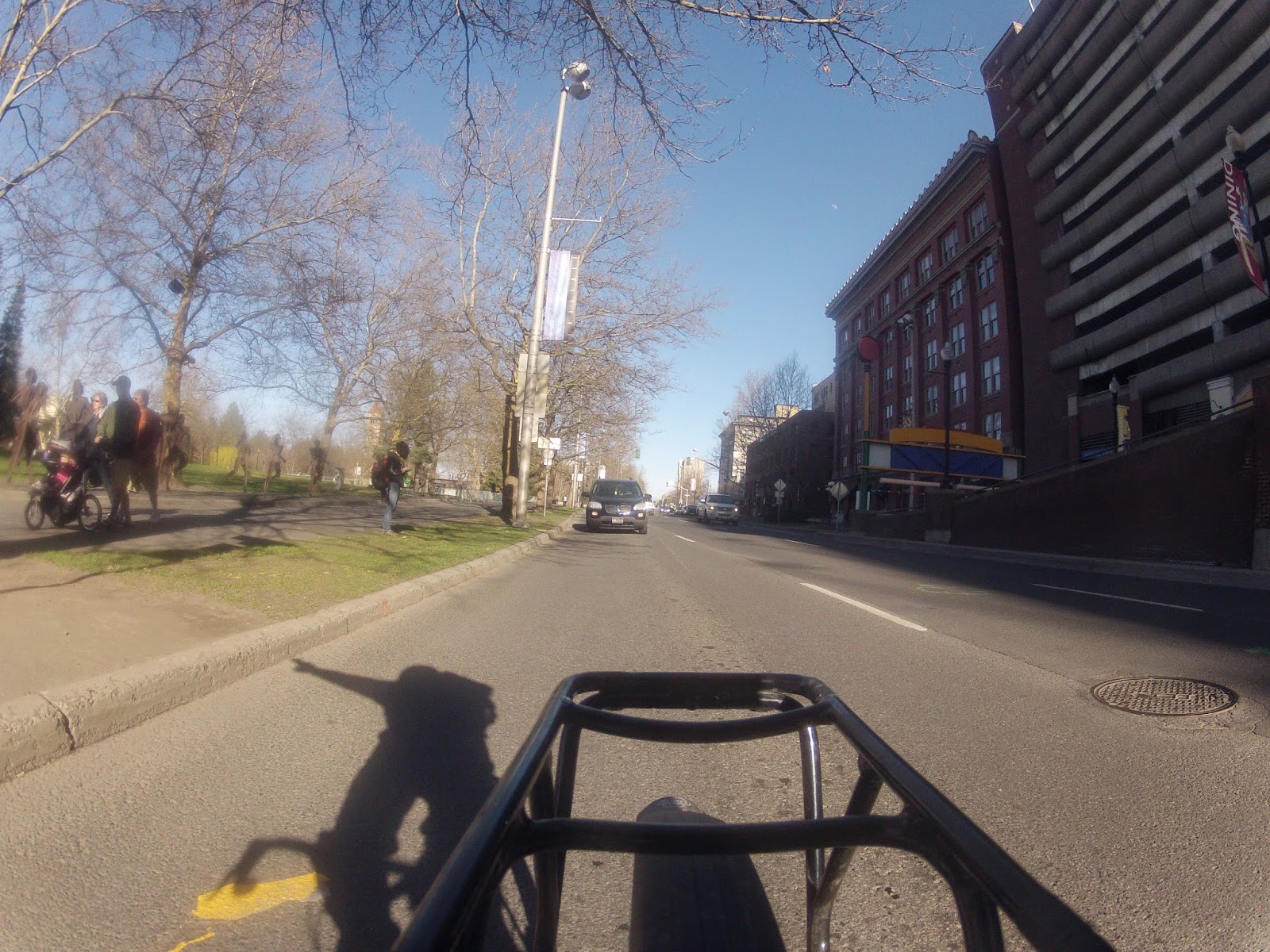 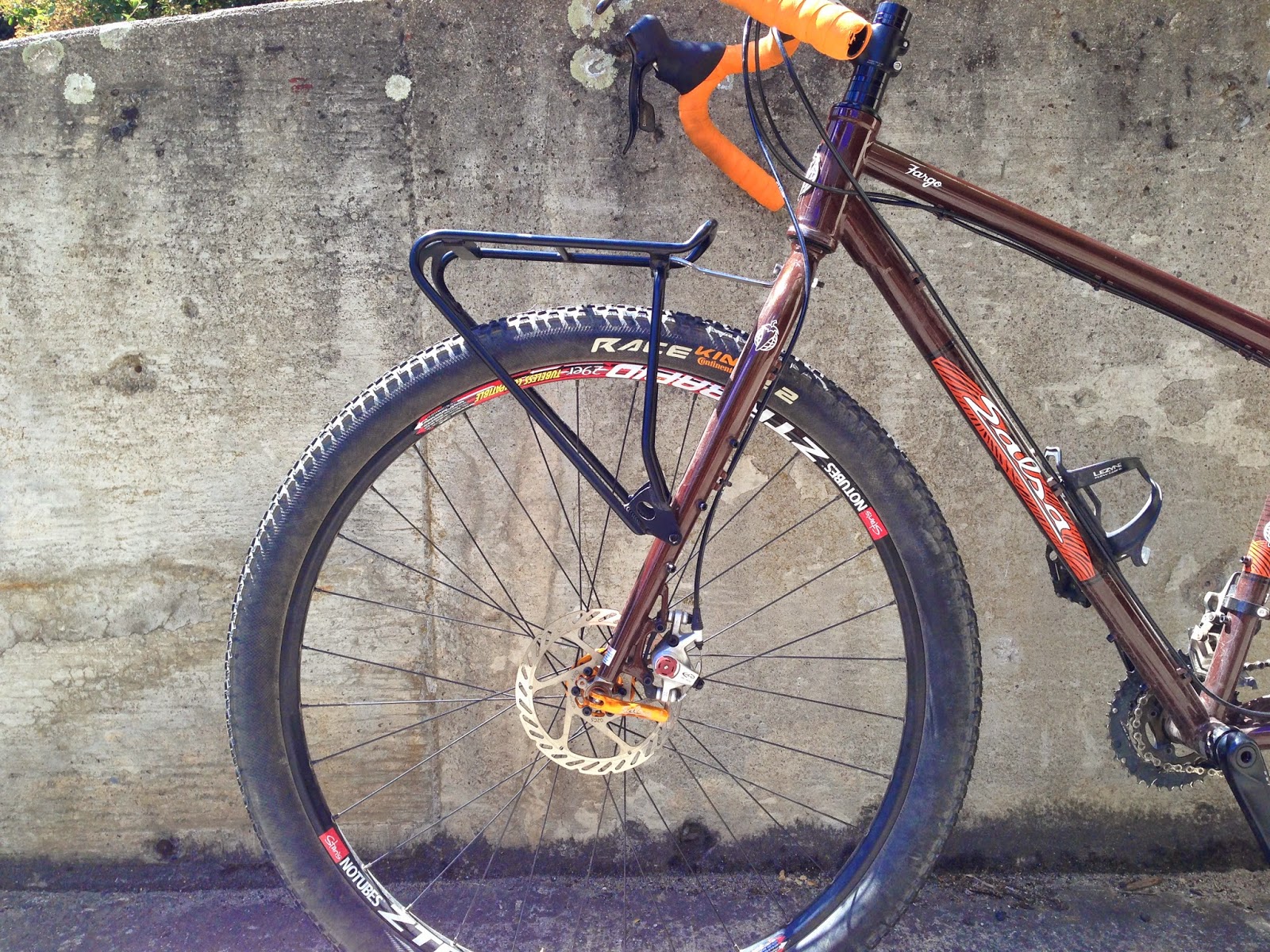 Thinking of doing a little 2-3 day bike camping trip on the Fargo, so I moved the Racktime Topit rack to it.  The Fargo fork is a little wider than the Vaya's so I had to pull on the rack legs a bit to spread them apart to fit the rack to the mid-fork mounts.  (They fit perfectly on the inside leg mounts on the Moonlander fork on the Pugs N/R.)  The mid-fork mounts are lower on the Fargo fork so had to bend the bracket for the fork crown hole mount until it is almost straight. Will see if I can get another bracket for when/if I move the rack back to the Pugs.

Next: tubeless? We'll see how that goes.  And maybe remove wheel decals.
Posted by Wileydog at 8:50 PM No comments: