Last Saturday I took the Neck Romancer out to the Martin Road Trailhead to test drive it over the railroad rock on the Columbia Plateau Trail.  Some advice if you're heading out on the CPT: 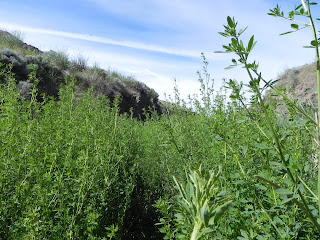 2. Don't wear your best shoes. They finally dried out and I got the stickers pulled out yesterday. 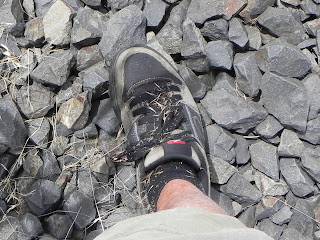 I left the trailhead at 9am.  Like usual I was only going to go a few miles to see how the tires roll, but ended up going out about 17 miles to Horseshoe Lake.  Good news: the bike (hereafter to be called the Pugs, Pugsley, or NR, as Neck Romancer is just too awkward) rolls great on the railroad ballast, even with fairly high tire pressure for a fat bike of 9-10psi.

The brush and weeds started a bit before Lamont. Not too bad, I thought. Easy. 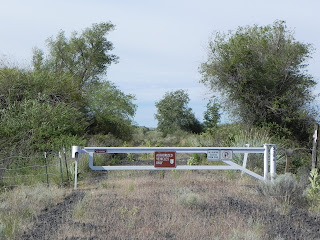 And quickly grew to unmanageable proportions in this rock cut so I hauled the bike up the bank. Forgot to mention the ankle deep water. 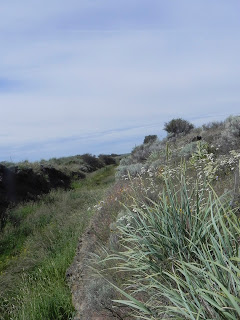 lots of wildflowers up above on the bank 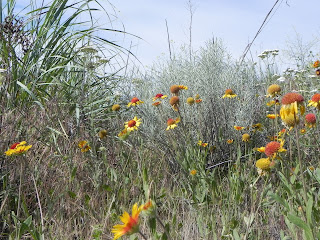 at this point I thought about bagging it and returning later in the summer or fall when maybe the brush would die down, but I decided to go just a little further.  Surely it can't be like this all the way.  From up above I could see breaks in the weeds on the trail where I could ride through so I went down and up a couple times. 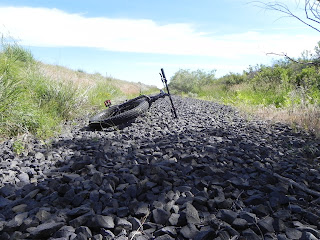 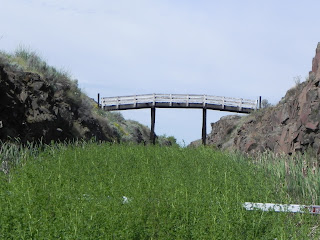 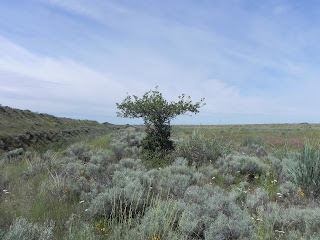 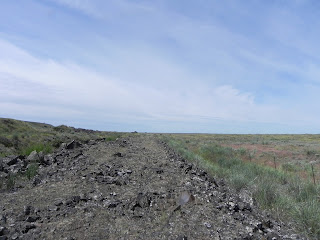 There's another section of brush after Lamont, and then it finally cleared up.

Lots of deer and owls. 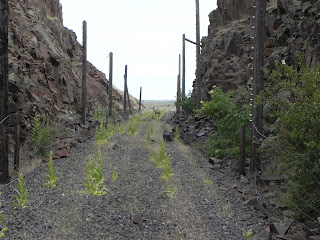 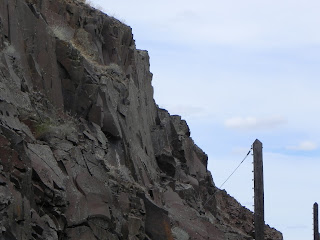 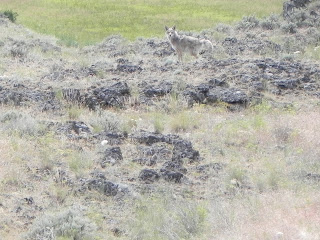 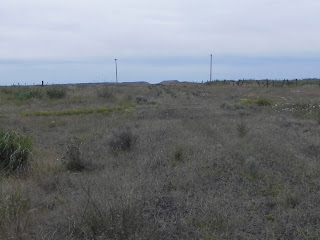 Knowing the Plateau and JWPT intersect somewhere, I had to check them out.  Hence what was an "I'll turn around after 5-10 miles at the most" ride turned into an all day adventure.  I found the Plateau trail curves to the left of the mounds, heading south.  Finally turned around just before noon, and before hitting the JWPT, thinking I'm going to have to plan a weekend trip instead to Washtucna or so on the trail.  Like usual, the ride and hike back took longer.  I stayed on the trail all the way back and rode, pushed and pulled my bike through the weeds.  Thinking about a root beer float at Zips in Cheney kept me going.  Missed the Prom Fiasco.

After I got the Neck Romancer I hooked it up to my BOB trailer and was disappointed to find the knobs on the left side of the Nate 4.0 tires rubbed against the trailer yoke/fork.

Last weekend I gave it another try.  I've read where some people hooked their Pugs right up to the BOB, while others did some bending of the trailer yoke and/or modifications to the BOB axle. I got out the crowbar, wonder bar, pliers, and workmate.  I didn't need any tools, though, because all it took was some pulling with my brute strength on the trailer fork while it was attached to the bike.  It worked best to pull on the stem (the part where it swivels).  I also flipped over the BOB QR Sleeve at the end of the axle on the left side, which gained me maybe a micro-millimeter of clearance by the tire.

I didn't gain much clearance but it was enough.   I figure I can work on it a bit more. Ignore the duct tape, that's where I planned on using the crowbar. 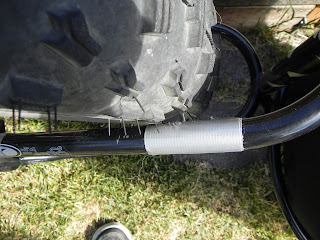 Yessiree I test rode this around the neighborhood with a kitty litter bucket filled with water. Always willing to entertain the neighbors. 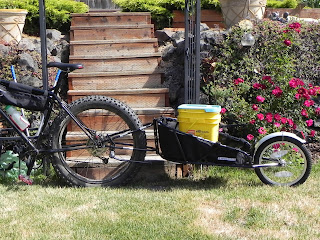 Posted by Wileydog at 5:44 PM No comments:

the No Fenders Solution

Wrap yourself in plastic: 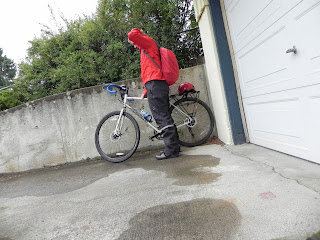 well, this is only a partial solution as donning waterproof gear doesn't keep front tire splatter from hitting your face and all that street crud getting flung onto your bike components.

Last month I went into the garage to check on my fendered bike and remembered it's on spring/summer/semi-permanent loan to a friend.  I fiddled with the various fender parts and pieces, but wasn't able to get them to fit on the Redline or Vaya.  I might've been able to get them to work with some cutting and filing, but didn't have the motivation.  I should after today's steady drizzle and more in the forecast.  But most likely I'll just put it off because dry summer weather is just around the corner.  I hope.

is good to see all the bikes out and about 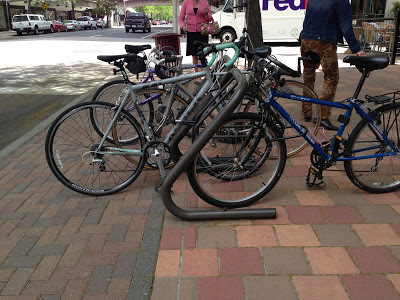 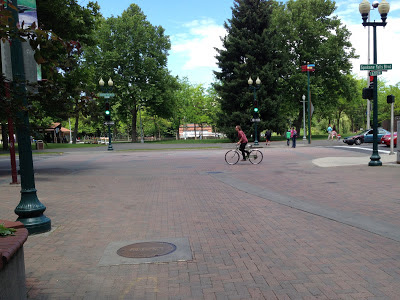 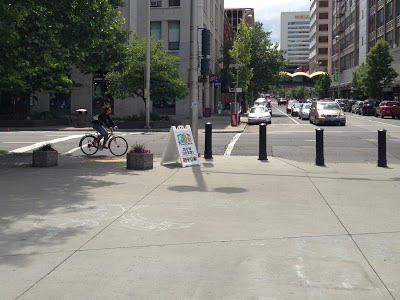 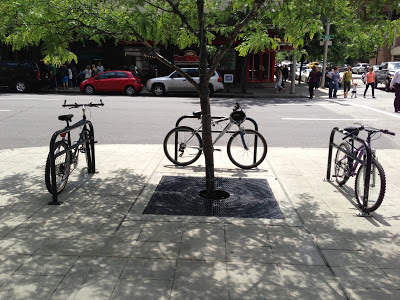 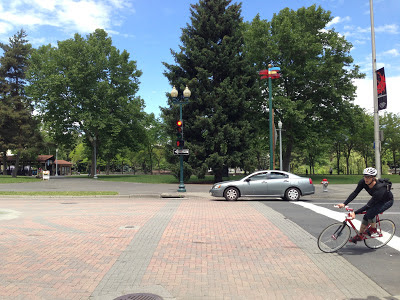 Posted by Wileydog at 7:34 PM No comments:

It's a reasonably Beautiful Day

Monday morning. Not much going on here, just a nice ride to work. 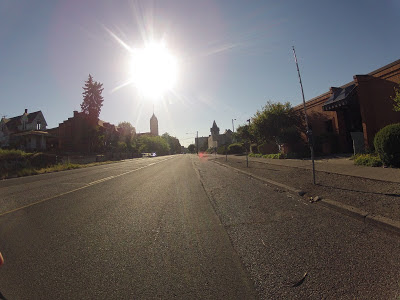 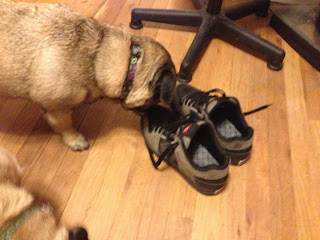 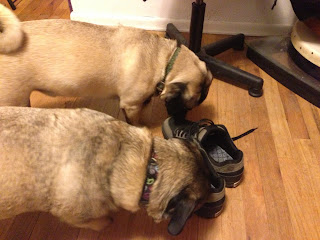 From this sniffing, the dogs could tell I was over in another dog's yard and I petted said dog and played catch and fetch with it. And that dog got a half of a hamburger.
Posted by Wileydog at 7:58 PM No comments: 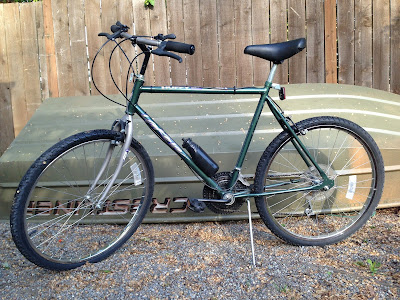 Well, sort of rides again.  This is the bike I started commuting on, and I thought it'd be fun to ride it to work again once or twice.  I filled the tires up with air and rode around the backyard and block.  It feels a little unstable and wobbly but after a bit I started getting a little used to it.

But it just looks and feels dangerous.  It's gotta weigh at least 50 pounds. The seat is gawdawful.  Did I really ride it with the handlebars up so high?

We loaned this bike to some friends who wanted to bike.  It came back pretty fast, and now they have a nice, real bike.  I thought about donating it somewhere, but after riding it I'm not sure.  Might just haul it down to the recycler.  But first, maybe I'll ride it next week to work for old time's sake.
Posted by Wileydog at 6:03 PM No comments:

Last week on my way to work I was stopped at NW Blvd waiting for traffic to clear so I could cross. There was one more car and it would be clear.  But the car slowed down and stopped a half block before the intersection.  What the hey? Are they stopping for me or something else? Why is it usually the last car? You know as soon as I decide to cross, the car will start moving.  So I give them the wave - ok go on by, you have the right of way.

But they didn't proceed forward. They waved for me to go.  I shook my head and waved for them to go.  They waved back. Oh great this is going to be a test of wills.  Sometimes at this point I'll go, but that is also when the driver decides to go.  Which is why I wave them by in the first place. So I wave again and yell not so politely "GO!".

I call this keep-going-wave the Paul Turner wave, named after the Slice columnist in the Spokesman Review.  He's also a bike-to-worker, and seems like a good guy.  Regular and semi-irregular readers of his column know that he has mentioned motorists stopping inappropriately for bicyclists and he brought it up in Sunday's column.  Like me, he waves them by.  Once he walked over and discussed it with the motorist.  I haven't done that yet.

I think most drivers think they are being nice, or maybe they think they're supposed to stop for bicyclists because we're like pedestrians to them.  But what I've seen happen too often is a motorist behind them thinks they're stopping to turn, and so they whip around the stopped car.  Or if it's a multi-lane street, the other lanes don't stop.  So I'm not about to start across the street until it's clear.  Even though I am a bike commuter, I still have a self-preservation instinct.

I've developed a few strategies to decrease the likelihood of a car stopping for me when they needn't.  I pull out my water bottle.  I fiddle with my light, cables or backpack.  On one-way streets I look down the street in the direction traffic is going, pretending to be oblivious.

Sometimes it gets amusing.  I waved one guy by on 2-lane 1-way Alberta, and he waved back. I yelled out - there's a car going around you. So he turned his head back and missed seeing the car that just whizzed on by.  He looked at me again and waved.  I didn't go because there were more cars coming and he finally drove off with that wtf look.  Once on Monroe a lady waited forever for me to cross as cars went zipping by in the other lanes, not stopping.  As she finally drove off, she yelled "I was waiting for you!" Well. yeah, but traffic wasn't stopping or clear.

Some weeks I break down and cross more often when a driver stops for me.  I regularly make an exception for School buses, as I figure if they took the trouble to stop those massive beasts for me, I'lll cross. Most other vehicles I give the Turner wave.