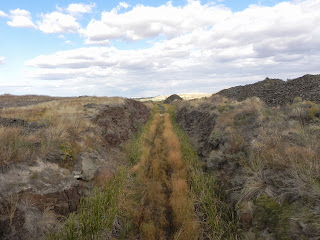 Thick and tall just past Lamont. Botanically speaking, I don't know if these are classified as weeds, or native plants/flora or even what the difference is.  I'll have to look into that. I call them either weeds or tules.  Whatever they are, they're a bit in the way.

A conference/vacation for the week of Sept. 22 fell through so I found myself with a few days off with no plans.  Sure, I could get some things done around the house, but there's always time for that in the future.  Originally, I planned on heading out on the trail and do an overnighter to see how far I could go in a day.  But then I don't know what got into my head and I scrapped that, just went out for a recon on the railroad rock to see how close to Washtucna I could get on a semi-loaded fatbike.  Shouldn't have listened to the weather people.

I started at the Martin Road Trailhead, knocking about 20 miles off from the start in Cheney.  Didn't take too many pics on the way.  There's a short, swampy section of overgrowth just before Lamont that I thought I could ride through, but it caught me off guard and I quickly came to a stop.  I thought the water was from the rain the night before, but this swamp might be a regular feature. There are tules/cattails on both sides of the trail here. I tried to push my bike through but sank into the mud up to my ankles. I don't know what happened to the railroad rock in this section, maybe it's buried under the mud. And it stank.  Might've been a combination of mud and cow manure, or whatever swamp gas is composed of.

Some pics further down the trail.

Saw lots of deer, owls. One coyote. And a porcupine that scrambled up a rock cliff but couldn't get any further up it.  So he stopped with his tail pointed at me.  Had me a little concerned, but I made it safely by. No wildlife pics, sorry. 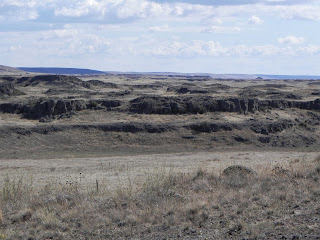 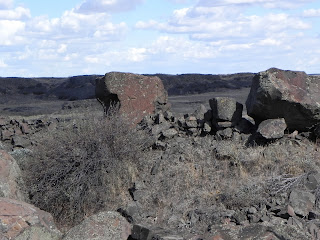 As I got near Lamont on the way back I started looking for a way around the overgrown section, and turned right on a road (McFaddon Rd or near McFaddon Rd according to my GPS Topo map, unnamed in Google and DeLorme atlas) that led to the Lamont Rd/McCall Rd intersection. I hopped off the trail and took Lamont Rd.  Before I reached Lamont, I took Revere Rd to this little wooden bridge over the trail.  On the way out, I'd been startled to look back and see someone standing on this bridge watching me as I pushed the Pugsley NR through the tules. 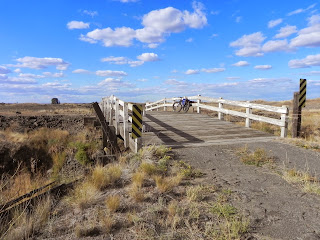 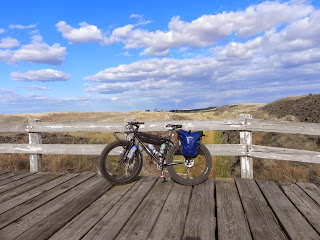 Next time on the way out, I'll probably leave the trail at the Lamont grain elevator and take Lamont Rd to skip this section.  That will only have the shorter, swampy section to get around/through before Lamont. 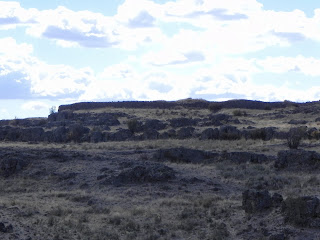 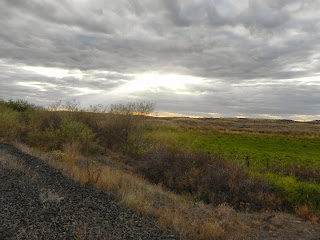 I didn't hit a bad headwind on the way back like before, but by the time I got back to the Martin Rd I'd had enough of the trail. Texted my wife and told her I was over the trail.  Didn't want to see it again.

But you know...I'd spoken to Eric E. before I left. He was thinking of doing an overnighter in October. Possibly can get a day off later this month and go, too.  But the wheels are still turning...I'm thinking a 2-3 day trip should be enough time to make it to Pasco.  Maybe take the train back if possible or get a ride back.  Pencilled in for next year.