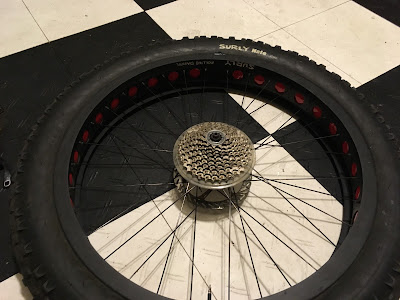 
(I should probably mention I paid for the FattyStripper items and received no compensation for this...in fact nobody has ever sent me anything free even though I’m a renowned worldwide blogger).  smiley face.
Posted by Wileydog at 10:33 PM No comments:

I really didn’t expect this to work.


I’ve had my Pugsley Neck Romancer for 4-5 years or so, and about the only thing that bothers me is the delayed response from the front wheel turning. I call it self-steer. I'll turn the handlebars, and a second later feel weight moving in the direction of the turn. At first I thought it was just the way fat bikes handled, or maybe it was due to the straight arrow tread pattern of the Larry front tire. After a few years I suspected what I was experiencing was the delayed sliding movement of the tube in the direction of the turn.

I’ve mainly ridden my Pugs to work this winter, and it really started bugging me. Let's see, how much would new tubeless rims cost? Then I ran across the FattyStripper Tubeless Solution on the inter webs. It's similar to the split-tube method. I ordered their FattyStripper Latex Band and red Bling strip, after warning Debbie about the name on the card charge. (She seemed nonplussed). Also, ordered foam backer rod strips that they recommended for the Rolling Daryl rims (as they say "for rims with loose tolerance for seating the bead"). If this setup didn't work, at least I'll get a little more color on the bike with the bling strip.

First I took off the tire, tube, and rim strip and installed the bling strip, managing to get it on somewhat loosely. Then stretched the FattyStripper over the rim and put two foam rods under the strip next to the edge. Got the valve in and put the tire on. Poured in a little bit of sealant. Fired up the compressor, blew some air in. Sealant spewing everywhere, the tire beads mostly refusing to go towards the rim edges.  Ok, stopped that. I pulled out the foam rods because they were preventing the tires from sliding over to the rim edge. (Reading the directions again, I may have misunderstood and should have put the rods more towards the center). Put about 2 oz. more sealant in the tire and fired more air in the valve. Sealant spewing in lots of places but the tire is attaching to the rim. Rolled the tire around, did the hippy hippy shake to spread the sealant around. More air, a little less spewing. Repeat, even less leaking. Hey, this might work. I put the valve core in, and filled the tire and let it sit. Some leaking going on.

I brought the tire in from the garage into the basement and let it sit, then measured the air pressure. It was at 7.5 psi. Thought it'd be higher, so I grabbed the floor pump and pumped more air in.

Suddenly at around 17 psi, POP! A little more air, and another POP. Whoa, the bead sat! I left it at 15psi and let it sit overnight. I think it went down to 10, then pumped it back up. Repeated next day, then the rest of the week it was holding steady.

This morning, I dropped the psi to 10 and took the venerable Pugs for a test ride around the block, hoping the tire didn't pop off the rims with some weight on them. Whoa, it works and no self-steer! Maybe a little from the arrow tread pattern. I headed down to Joe Albi stadium, and rode a favorite curvy, winding trail behind the Dwight Merkel sports complex. Fun, no tube sloshing back and forth. Even with the pressure fairly high, the bike handled great and I didn't have to fight the tire around a turn.

I don't know how well this will last, and will always have a tube with me attached to the rear rack or in frame bag. I don't plan on getting too far from home, yet.

Next up for tubeless: the rear Surly Nate.