So it looks like we've broken some sort of rain record for March in Spokane. Like everybody else I hated to see the rain return after last Sunday's sunny day. But like any respectable Beatles fanatic/cyclist, I've had "Rain" running in my head for the last week (or more) on my commute:

A guy at work came in from outside and told me he was tired of people saying to him "What, you were outside in the rain?" Told him don't I know it.

But I am ready for "Good Day Sunshine" to replace "Rain" in my head.

super nice day yesterday. Explored the trails over at Riverside State Park, wasn't sure where I was going or where I was half the time, just followed the trails to see where they go. Luckily it's hard to get lost up there, as even directionally challenged me could tell where Spokane was at any time. Also, you could just follow the sound of the rifle range along the river to get back. Met a few bikers out there, and followed the advice of one to follow the "trail to the right" for a good view. Had to walk my bike partway up the hill, but it was worth it.

Figured out how to send my Garmin GPS track to Garmin Connect so I was able to get a bird's eye view of just where I went.  I don't think I'm going to be able to repeat this exact course again. 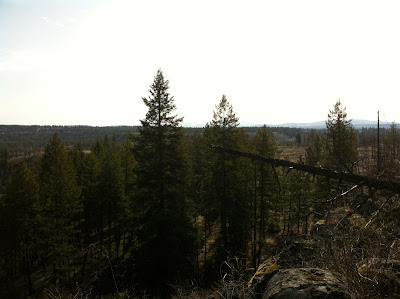 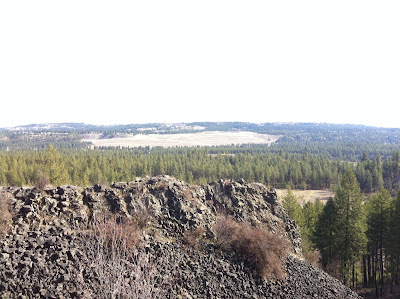 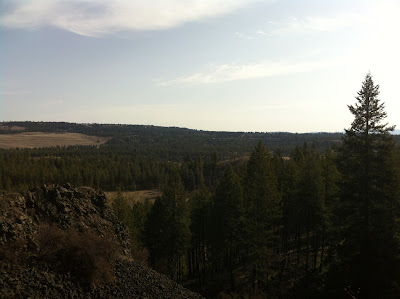 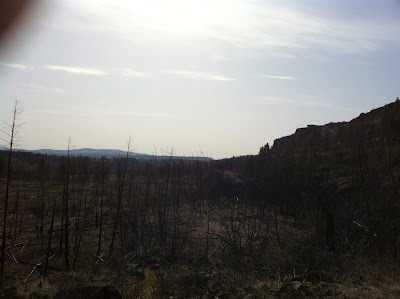 Posted by Wileydog at 9:11 PM No comments:

This bike has been talking to me all winter, wanting to hit the road, hit the trails, go anywhere besides hanging from the garage ceiling like it's been doing for a couple months. I've been trying to ignore it.

You might notice in the picture above that the handlebars are pointing left a bit, while the tire is straight. I discovered it was crooked the last time I took the bike out for a ride sometime in December, but hung it up without fixing it.  During my only crash at the final cross race in November - with less than half a lap to go on a snow covered course - I landed pretty hard while trying to get out of the way of one of the guys about to lap me and must've bent it then. That's a lesson learned - from now on I'm going to make those guys work to get around me. Unless, of course, if I'm going really slow and should get out of their way. Which is normally the case.

Well I finally heard this bike's pleas, got the handlebar pointing straight ahead and took it out a week or two ago Sunday. (editor's note: had this post halfway written for the last week or more.) Started out as a little street ride with my wife. She's battling a torn ACL and had just received the Doc's ok to ride. After a short ride on the street together, I veered off at Albi and rode down the trail to Aubrey White Parkway to Downriver and back home. The off road portion of the trip was a little iffy, being a mixture of almost dry dirt, mud, puddles, snow and ice. But it felt good. Looking forward to some dry trails in the not too distant future. I hope.
Posted by Wileydog at 6:49 PM 1 comment:

Back in the mid-sixties, police officers came to our school and showed us a movie on bicycle safety. It was hilarious - I remember there were monkeys riding bikes, crashing into things and falling down manholes. We laughed so hard. I'd recently been thinking I should see if I could find it online. But then I read in the Cascade Courier (the paper of the Cascade Bicycle Club), that a movie called One Got Fat was going to be shown at the Bicycle Film Shorts Festival at the Seattle REI:

"A group of children, all wearing ape masks, ride their bicycles to the park for a picnic. Along the way, all but one are eliminated for violating basic bike safety rules...A true bicycle comedy classic." It had to be the same movie, if a little different than I remembered.

Here's a link to it at the Moving Image Archive: One Got Fat.

Still funny if a little macabre. It's 15 minutes long and includes some cool bikes. I saw a little of myself in a few of the poor little bikers.

We were shown a different movie at school the following year, I'm not sure why.
Posted by Wileydog at 6:33 PM No comments:

I like longer shorts, especially in milder spring and fall weather, so I went on a little shopping spree a couple weeks ago.

On the left: Zoic Reign Wind Knickers and on the right: REI Thetford 3/4 cargo pants.  I usually ride to work in work pants, but it's nice to have something lighter for my longer after work rides when the days get longer and warmer.  And for weekend rides.

I already have a pair of heavier Reign Knickers that are too small for me now and I've been looking for a replacement.  The Zoic Wind knickers are lightweight ripstop nylon. I don't really like the material,  but they'll do. I searched around and found them at Price Point, there's also some sizes in black at Performance Bicycle. I think they're a closeout item.

One problem, though: my wife declared the knickers "cute", so I might have to send them back! I wore my old black ones at a couple cyclocross races in 2010, and remember getting a couple funny looks. Was probably my imagination though as I felt a little out of place amongst most of the other racers in lycra bike shorts.

The REI shorts are a 75% cotton and Nylon blend. I've always preferred cotton and only in the last few years of my old age have gotten used to the feel of nylon/polyester, but this blend is good. Not as many pockets as the Zoic's, but they do have a zippered side pocket. I think they'll work out fine for bike riding, even though they rub a bit on the knee while pedaling.

I also considered the MUSA Knickers sold by Rivendell, and the Bicycle Fixation knickers that Cycling Spokane recommends (see review from 2008). I like the Fixations, but they're expensive and are currently out of the hemp in my size. I'm not sure about the MUSA's. They received a couple negative reviews on Rivendell's site; also I have an aversion to Mr. Rivendell's writing style that has practically turned me off on things Rivendell. C'est la vie!

At the Seattle Bike Expo we found some knickers at a booth by a company called Aero Tech Designs. Their Urban Pedal Pusher knickers come in blue or black, are only $39.95 and made in the U.S.A. They're a buy direct from the manufacturer operation. 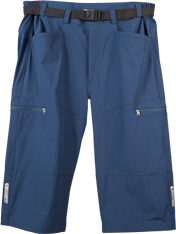 There you have it. I'm a regular clothes horse.
Posted by Wileydog at 10:54 PM No comments: 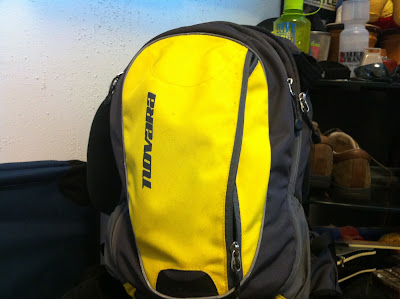 It was recently on sale for around $40, but I don't find it on the website anymore.

I like it. It's big enough to carry clothes, lock, pump and other assorted bicycle accessories in its 2 larger compartments and front pocket. It has a bag protector on the bottom that you can pull up over the bag in the rain. The only thing I don't like about it is the zipper on the front pocket runs vertically, and if I forget to zip it, I run the risk of losing whatever I've stashed in in it - like my keys, wallet and phone. So far I've arrived home with all my possessions and ability to get inside the house.

It shows dirt easily, but it came out of the wash just as bright yellow as the day I bought it.

But the bag is a little conspicuous, on or off the bike. OK, I guess that's the point of the bright yellow and partly why I bought it. It's noticeable. But sometimes I'd like it to scream "bike bag!" a little more quietly.

But darn REI, they're always coming out with something new and improved. So what do they do this year? They bring out the Novara Gotham backpack. 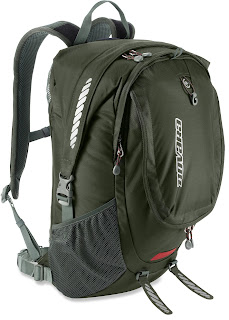 It comes in blackish or red with plenty of reflective bits. Its slightly larger at 26.5 liters. The front pocket has a horizontal opening with a flap that pulls down over it. It might be a little pricey at $99.50 but the black version wouldn't clash with my clothes - a very important consideration!

I like it, but the yellow bag doesn't need replacing yet. I know what I could do. The carry/hanging strap on my yellow bag broke last year, something I remember reading about in the reviews. I could take it back and trade it in towards the Gotham. Someone else could get a good deal on a used bag at a Scratch and Dent sale. But I just can't do that now.

I should probably rent a table at the Spokane Bike Swap March 24-25 and sell a few extra bike things I've got laying around, including the yellow bag.
Posted by Wileydog at 10:38 PM No comments:

Hear that squeaking? That's me riding down the street. My bike has gotten a little winter street dirty: 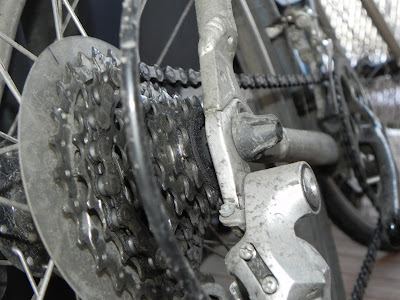 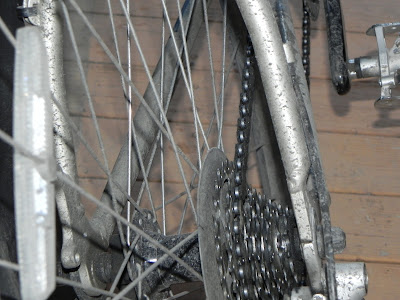 I picked up a fresh bottle of degreaser last weekend and intended to give the bike a wash down, but the weather didn't cooperate. I did get some lube on the chain so it's not so noisy and embarrassing riding down the street now. Hope to get it cleaned up this weekend.

Not sure about the weather forecast, though. Might have to do like me bike buddy Hank Greer over at Shallow Cogitations and bring the bike inside to clean it up. Here's his Bike TLC Day last Saturday: