and a little longer ride the next day

After my short tour of the back yard, I went out with my wife's running group and rode the Fish Lake trail starting at the trailhead near downtown Spokane. Debbie warned me to stay on the pavement, as she knew I'd be tempted to ride off trail or past where the pavement ends by Scribner road. And there'd be no sympathy if I crashed and messed up my collarbone again.

So I had a little dilemma when after two miles the paved trail was interrupted by a dirt road crossing. I bravely (but maybe just a wee bit nervously) rode across it. Made it safely to the other side and continued on my merry way. It felt good to be on actual bike ride again. The trail is mostly flat but I felt a little sluggish and didn't remember the slight upgrade on the way out. I also had the seat set too low which didn't help and my legs were struggling a bit. I made it to the end of the paved section and checked out the dirt section of the trail past the No Tresspassing signs. It looked tempting, but of course I'd never actually trespass and would take the highway to the next trail segment if I were to continue on....

I turned around and enjoyed the easy ride back.
Posted by Wileydog at 9:41 AM No comments:

..was a little short ride in the back yard!

I haven't ridden since the Cyclocross finals in Couer d'Alene when I went wide around a corner on the first lap, came to a dead stop somehow, crashed and landed hard on my back. Broke the collar bone. Embarrasing. I was a little ticked off with myself, as the practice laps were fine and I kept it under control. I started out the season on the flat bar, disc brake equipped hybrid style Marin, and switched to a cross bike mid-way through the season. It took some getting used to the switch to drop bars and canti brakes, but I thought figured out at the Liberty Lake race. I was wrong.

My cross bike has sat in the basement since then, with all that sand from Riverstone still caked on the bike. I hauled it out of the basement last Saturday and took it outside and cleaned it up. Got the chain back on - it had slipped off the sprocket and was stuck between the frame and the doo-hickey that was supposed to keep it from slipping off. Then I took a lap around the back yard, which was probably not a smart thing to do what with the uneven ground and holes dug by the dogs, but I survived it.  (I had surgery in February, and Dr Peterson advised me to start out on a spinner - he didn't want me crashing again and making things worse. I did some time spinning at the Y and was tired of that.)

Here's a picture of the freshly cleaned front wheel being inspected by Dash and Scout: 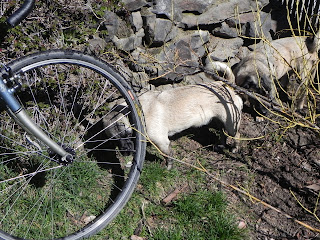 Posted by Wileydog at 9:05 AM No comments:

If you're familiar with BikeSnobNYC's blog, you know about the guy he calls the time traveling yellow t-shirt wearing retro-Fred. I think I'm related! When I first started bike commuting, I wore a bright yellow t-shirt from Target with my work pants (or regular shorts in summertime). But the next year I got me a proper yellow cycling jacket and jersey. Then I broke down and got some padded cycling shorts for summer. Not the tight Lycra/Spandex ones, but nice baggy comfy ones. I'm a firm believer in not walking into the office in Spandex! I still prefer to look semi-dorky in the cooler seasons and wear Docker type pants riding to work. Cuts down on the time needed to change clothes.

But lately I've been thinking of digging out that yellow t- shirt. I kinda miss it.

(I'll have to learn how to do a proper link)
Posted by Wileydog at 9:06 AM No comments: