Got some new studded tires and suddenly everything's alright! 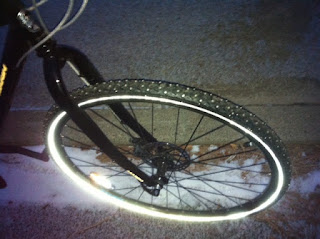 This photo was taken last week before our recent light snowfall.
Too bad I'm off work this week and won't be commuting on them,
but I hope to get some riding in.  And too bad the forecast calls for
warmer temps next week!
They rode fine on the bare pavement last week, although a bit noisy,
and came in handy on the side streets that were either icy or had a
spinkling of snow still on them.
Posted by Wileydog at 12:05 PM No comments:

A couple Saturdays ago my wife called to let me know that on her way to her hair appt she saw REI's Scratch & Dent sale was happening. I didn't need anything, but I headed down there after 10am anyway, not expecting to find much of anything. First thing I saw coming in off of Monroe street was that the Bike rack still had some nice bikes waiting to go to good homes. Then I saw the used Marin Muirwoods 29er for $279. Regular is $620?  Looked brand new. I shoulda snapped it up right then and there but hesitated. Ok ok, I already have a Muirwoods (currently loaned out to a friend), and I need a mountain bike, but this one is the 19 inch model that I looked at earlier in the year. I bought the 17-inch model a few years ago, and even though I'm barely 5'8", it felt a little small for me. I usually had the seatpost extended past the recommended limit. So I thought about it, thinking if I didn't need it I could give it to our friend or my brother who is looking for a bike.

I looked around for a bit and came back to the bike. It was now $179! And here it is now at a good home: 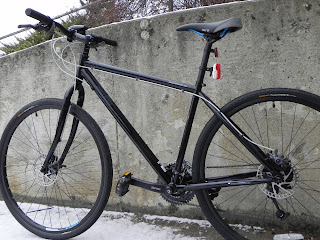 There's not much difference between this 2011 model and my other one which I think is a 2010. The downtube is a litttle less beefy, and it doesn't have the large plastic Marin decals (thankfully), but I think most everything else is the same, including the too wide handlebars and 28 x 1.6/42-622 tires. Both are heavy steel bikes, and it reminds me of last years' cyclocross race at Stanger Farm, trying to drag the beast up the muddy hill after the creek crossing.

I have the seatpost right at the limit, and it feels just right. It rides smoooth, smoother than I remember, but that may be because the tire pressure is low. It might even ride smoother than my Redline Conquest Sport which I've been using for commuting this year. Which is funny because the Sport felt so nimble and quick riding to work compared to the older Muirwood. I love the disc brakes - they are a huge improvement over the basic cantilevers on the Sport. (By the way, thanks to Two Wheel Transit, those canti's actually work now!)

Here's my old one for comparison - it's a little hard to see behind all the accessories, though. 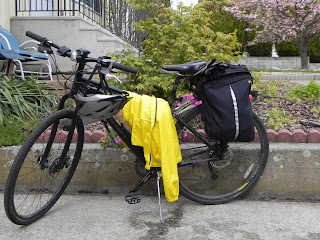 I'm thinking I might have to be selfish and keep this one for me. It'll make a good winter commuter bike with some traction tires or studs on it.

Or sure I could be like this Alex guy  who got an REI bike on sale and "replaced a few components". Like the cranks, tires, pedals, handlebars, and grips...and oh yeah the fork and frame, too!

No I don't think so.

Somehow I posted this a week or so ago before I was finished with it. Or I got tired before I was done and hit the publish button and forgot I did. Anyway here goes again.
In the wooded area behind Albi Stadium and the Dwight Merkel Sports complex, there's some trails used by us locals for dog walking, jogging and biking. 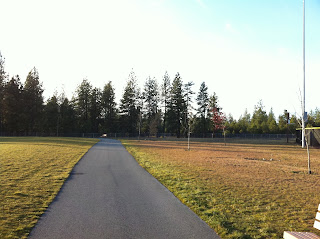 After my shoulder healed earlier this summer,  I got brave and rode my cross bike down this slippery, twisty, gravelly trail off the north side: 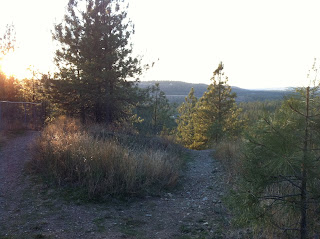 And ended up in the housing area at the bottom of this picture: 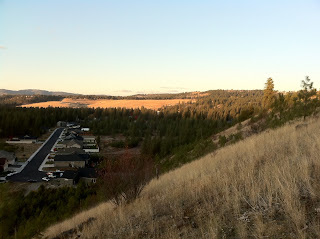 
Ever since the Dwight Merkel Sports Complex was built in North Spokane near Joe Albi Stadium last year, I've wondered about the planned trail from the complex down to Riverside park. Where was the start going to be? Maybe I should volunteer. I looked all over the place but couldn't find anything posted about the trail.

From the bottom, I could see another wider, gradual, straighter trail heading up the hill. Turns out they already built the trail to Riverside! 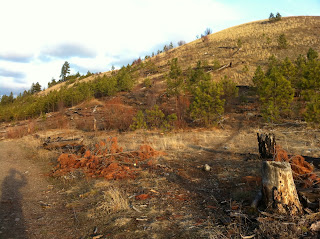 It took me a few times riding up the trail to find what I think is the start of the trail at the top. It's the same spot I started at, but at one of the junctions with other trails you have to stay left and climb up for a little bit: 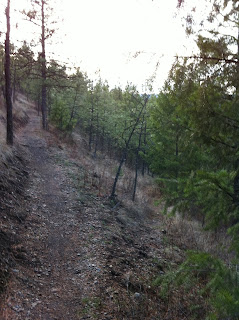 There are a couple other junctions like this where I think you need to go left to stay on the trail to Riverside.

Here's another picture from the trail looking west. I've been meaning to head down there on a nice sunny day with the good camera instead of my phone, but apparently that's not gonna happen. 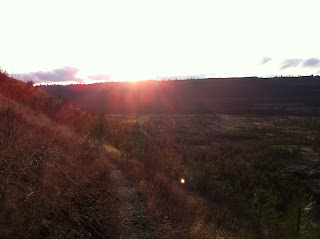 The easiest way to find what I think is the start, is to enter the wooded area here behind center and left field: 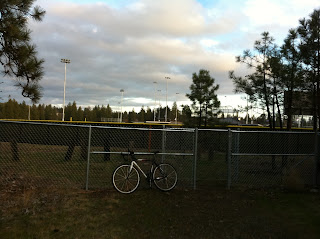 There's info on the trail here from the Spokane Parks Dept. There is a link there to a Facebook page with pictures of the trail building back in July 2010.

A random picture taken from above, near the cemetery: 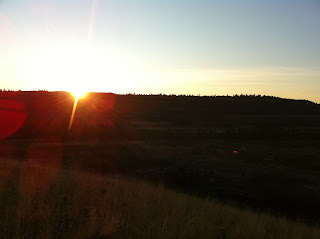 Posted by Wileydog at 9:10 PM No comments: