Well I finally did it, got me some new tires. Earlier this year I looked at the rear Kenda Flintridge and saw it was getting worn down, and thought I should switch it to the front even though Sheldon Brown said not to. Thought maybe I could get another year or two out of the tires. But then I looked at the rear tire again a couple weeks ago, and said yikes! that center tread is worn. Maybe it’ll last through the year, but maybe not and it looks too worn now to move up to the front.

Well, I’ve been itching to try some other wider 700c tire offerings and there’s a few more to choose from now than a few years ago. Thought about the Maxxix ReFuse again, or the new Donnelly (neé Clement) Strada Ush 40c but then along came Panaracer with another GravelKing model but with a smooth tread and 38c (finally!). They’re light - 320g - and under $50. Choice of black or tan sidewalls. Cool, so I got me some. This time I went for smooth ride over long lasting as opposed to when I got the Kendas the main focus was on tires that looked like they would last a couple seasons.

I thought now would be a good time to upgrade my rims to actual tubeless rims instead of the stock DT Swiss/Stan’s tape combo, but I couldn’t wait. I tore off the old tires. 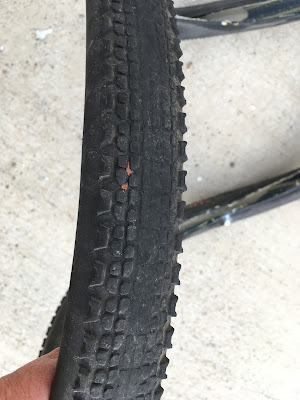 ....and struggled mightily to get the new GravelKings on the rim. They were tight and close fitting! Tougher to get on than the studded Marathons. Finally, once they were on I zapped some air in with the compressor, and holy crap after the bead set and popped a few times, they were holding air. And they sat perfectly round on the rim. I put some sealant in and let them sit overnight. They lost a little air in the morning, with just a few spots where sealant leaked out a little.

My first test ride was on the street and Fish Lake Trail with a helluva head and side winds. Didn’t really notice a big difference. 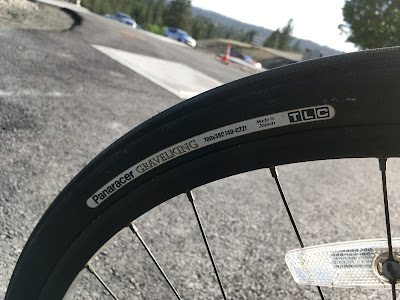 Been biking to work on them last week and this week, and found they do roll nice.  Really notice the difference when I’m coasting or going downhill, feels like the bike is rolling more easily. Took it on a dirt trail off Nortwest Blvd, and they handled pretty good.  I’m still a little leery on the street when turning on a gravel strewn street, but the grip seems pretty good on pavement.

I might be getting too optimistic here, and expecting a little too much from these tires, but maybe now I’ll finish the Midnight Century under 10 hours again!

I’m just not looking forward to when I finally upgrade the wheels on my Vaya and have to take the tires off, and put them on again.

P.s. legal disclaimer: Tires were bought and paid for by myself as no companies still don’t  send me free stuff to review.
Posted by Wileydog at 10:41 PM No comments: