It's a Ride Report: GFE

Whoa, I finished the 80 mile Ephrata Gran Fondo in 7hours 32minutes; 2 minutes slower than last year even though I feel a little stronger now. Going to blame it on all the stopping for pics I did this year. Still a full hour and 1/2 slower than 2014 back when I was in better shape, actually getting some long rides in beforehand during milder Jan-Feb weather.

So yes we got pics, lots of pics this time.

I took the front rack off my Vaya this time, and it seemed more spry and speedy. Haven't put it back on yet for commute mode which means I had to backpack donations for our work sponsored charity, splitting it up into two trips. Thinking I'll eventually put front and maybe rear rack back on, but right now I'm enjoying the ride.

I also pumped the tires up over 40psi and they rolled better on the pavement sections. Usually, I lower them because of the gravel sections which doesn't work as well for the pavement.

Note below also, I have the WolfTooth B-Rad Half-Bottle adapter on the down tube bottle cage. It rotates the bottle out just a bit so the tall 22 oz bottle will fit outside the frame bag when the bottle cage is in the usual spot.  It just clears the pedals, and surprisingly doesn't get in the way. I've also used just the B-Rad base to lower the bottle cage centered on the downtube, but then the seat tube bottle gets in the way and you have to raise it and use a shorter bottle.
The pre-ride meeting: 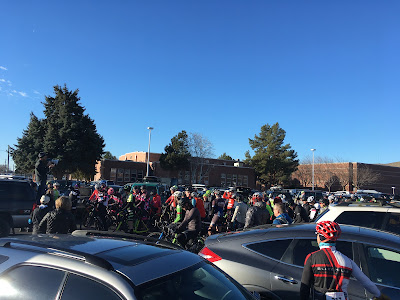 The traditional foggy screen shot after I first pull my phone out of my pocket. This was an hour  or so in and already off the back as they say: 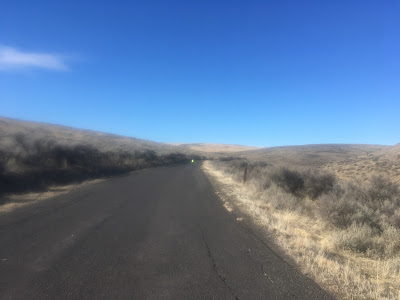 What I've noticed this year and last is there are more gravel style bikes with lower gears than there used to be. First couple years I did it there was hardly anybody with lower gears than me, but this year I watched enviously as a guy with a 1 x 12 system effortlessly pass me up a hill as I was in my lowest gear (34 X 36). Of course, sometimes they effortlessly pass me because I'm just slow.

Most of these pics are of the gravel sections, yet only about 30 miles is gravel/dirt.  Needs more. 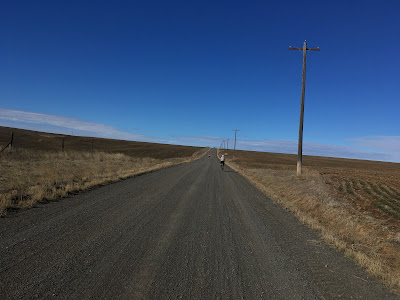 Baird Springs Road, my favorite portion of the ride. It's a fast downhill, and my tendency is to go too fast. When I first started biking this Fondo I would pass a lot of guys on skinny tired road bikes, but now I'm so far back I don't get to fly smugly by anybody.. 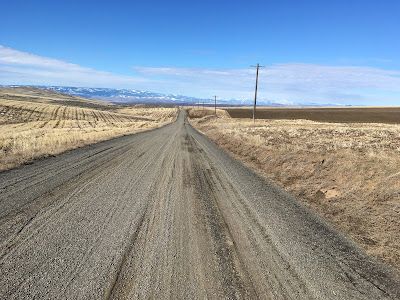 More pics of this area, because I can't decide which ones to edit out. 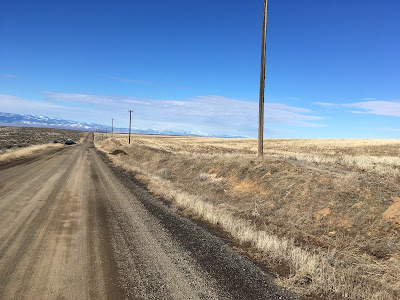 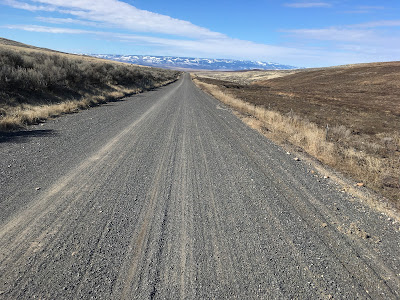 It's funny, I almost switched to the 50 mile course which doesn't go down Baird Springs Rd. It leaves from the other end towards Quincy, and takes Overend Rd. which crosses Baird. One thing in favor of the 50 mile course was riding the full Overend Rd which I've never done. I also just like the name, and it seems appropriate for me.  While biking down Baird, suddenly I met bikers heading towards me - it tuns out the 50 miler had to be re-routed and skipped Overend. 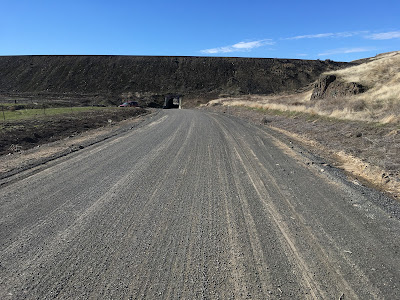 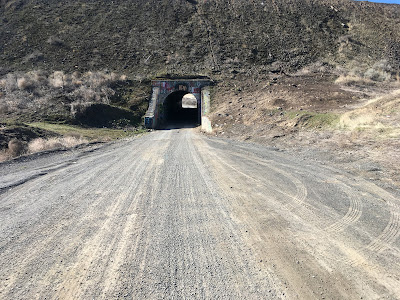 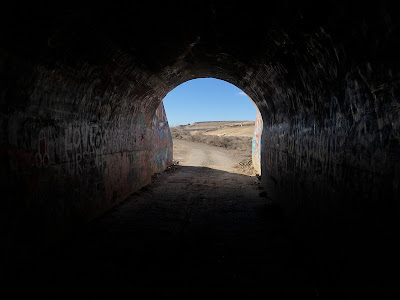 30 some miles in, and it's biking on Stuhlmiller Road up above Hwy 28 and the Columbia River.
There were a lot of dirt bikers in the Stuhmiller Road area, and I began to wonder why don't I take up dirt biking? Seems easier and funner! Also more potential for broken bones for this old man who likes to got too fast downhill. 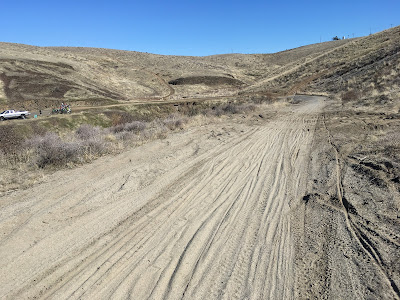 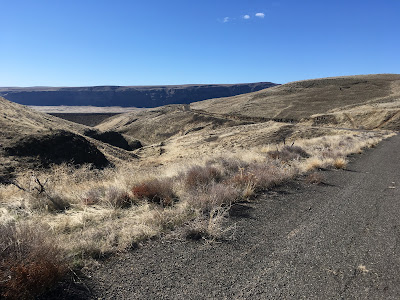 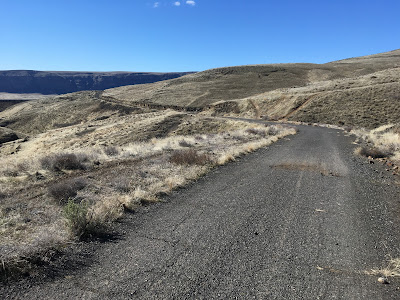 The Palisades Road through the Moses Coulee. I noticed an old shack up against the cliffs along here that I hadn't seen before. Thought about exploring but I stuck to the planned route. 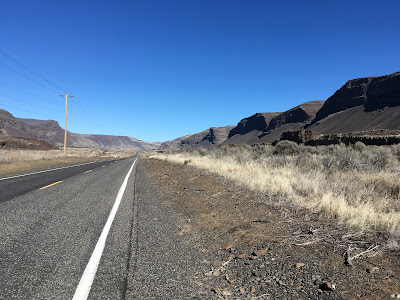 These guys were stopped ahead of me, and got going when they saw me coming. I'd been leapfrogging with the two in black a few tines. One had bike issues early on, and I passed them again when they stopped on Stuhlmiller Road. They promptly passed me again, then  I saw them at the 40 mile pit stop. The guy in yellow took a ride home a bit beyond here. 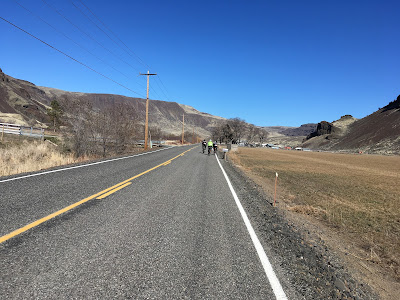 The first of the Three Devils hill, which I am happy to report I didn't walk up this year. It's steeper than it looks, honest! After here I found myself glancing at my Garmin and worrying about the time and mileage, so I switched it to the elevation screen. This year I wasn't too concerned about how fast I was going compared to others, I was just biking it at my own pace trying not too worry about the time and distance. 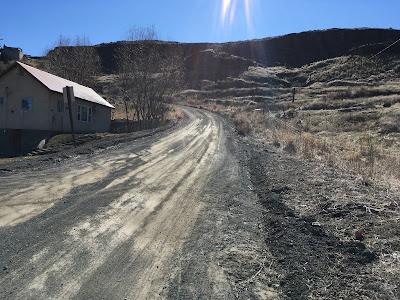 Another foggy screen shot, this time up in the Sagebrush Flats area. I actually passed a guy after the climb up from the Palisades on a short stretch of paved Sagebrush Flats Road, before the turn onto gravel Road 23. 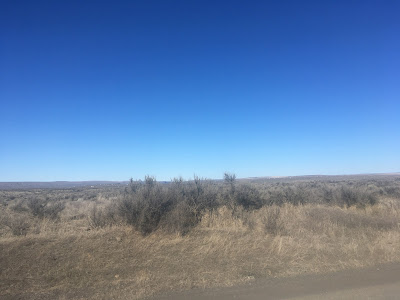 Back on Sagebrush Flats Road, I stopped to take a pic of the change from the last bit of gravel to pavement, and that guy I passed went and passed me. I though oh no, I'm last place now! Sure, I was biking at my own speed, but I didn't really want to be last. A support truck came up from behind and asked me how I was doing. Doing great! Not going to take a ride now, less than 20 miles from the finish. Sometimes I wonder if the support truck is just hoping we stragglers throw in the towel and they can head to the post ride meal. 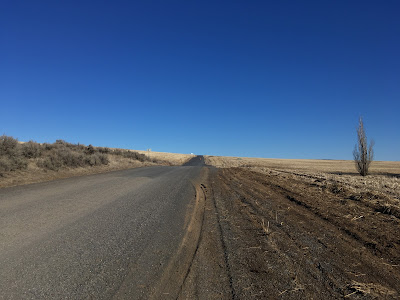 Still up in the hills, before the last superfun downhill portion of Sagebrush Flats Road. Ephrata in the distance off to the right. 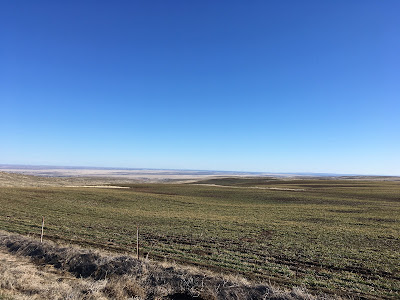 Sorry no pics of the downhill. Like I've said before, I should have been a downhill mountain biker, I love going fast downhill. I came up from behind the guy that had just passed me and could've probably zipped by him. But in a rare moment of caution, I held back. He ended up finishing less than a minute ahead of me.

I got a few cheers from the timing people as I hit the finish line, and snagged a finisher's patch from an outstretched arm. As I was resting up it looked like the timers were closing up but then I heard more cheers and another biker approaching. Whoa, somebody was behind me. Good thing I didn't slow down at the end.

I biked the two miles home to my parent's house, and then we went to dinner at Tequila's, a Mexican restaurant in town. I stayed overnight and drove back to Spokane the next day.