Rode into work Monday morning and was pleasantly surprised to see the stop signs for bikes crossing Post in the bike lane were replaced by yield signs. And the sidewalk on the west side of the bridge was finally opened up again, so less people walking in the bike lane. 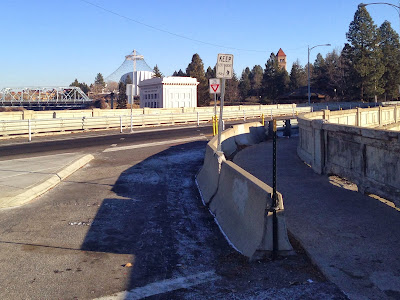 From the other side, heading north on Post on the 2-way bike lane: 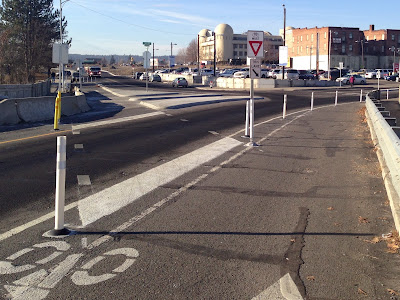 Not sure why they replaced the stop signs - maybe they realized that bikes don't need to stop here, as there's not a whole lot of traffic on the street.  The Stop signs may have been confusing drivers also as they were angled more towards the vehicle lane than the new yield signs.  (I was driving home with Debbie and some friends this way Saturday night, and had to reassure everybody that I wasn't running the stop sign since it was for the bikes.)  The bike lane doesn't cross Post at a good angle here - you have to turn your head to look back while approaching the crossing.  I think I prefer to take the lane when riding north and skip the bike lane.

Riding south on Post Street, I had been confused by how to get over to the bike lane on the east side of the bridge.  The single lane splits into a bike lane on the left and a lane for a right turn only: 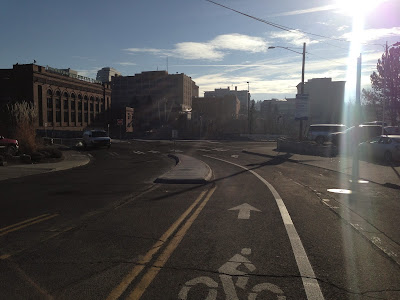 I had turned left after the divider a couple times, but realized I was cutting across and heading straight into the north-bound lane on my way to the 2-way bike lane. 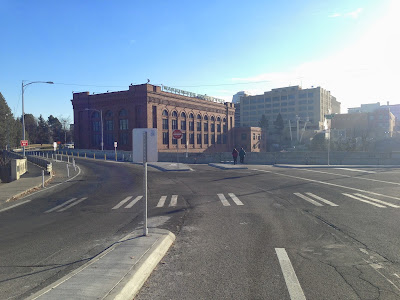 It suddenly dawned on me you're supposed to continue straight and go to the right of the Do Not Enter sign, ride between the islands, then cross in the bike crossing.

When this connection to the Centennial Trail first opened up, I thought I'd take it every once in awhile for variety on my way home, but would usually ride north on Post to Broadway.  But most of the time I've been crossing Post here, heading under the Monroe Street bridge to the Trail. It's a quick and easy way to get to Elm Street or Summit Blvd to head north.