I got the Pugsley Neck Romancer in April and I finally got a chance to ride it in the snow today.  It was kinda like when your puppies first experience snow. They go whoa what's this? but soon are romping and running around in it having a blast.

It's great to ride the Pugs on the dirt trails, but you know a lot of the appeal of these bikes is their snow capabilities. I was bummed because it snowed yesterday and I had the day off, but no time to ride.  The plan today was to test ride it in the street so I could see how it would work for bike commuting, and get some snow trail riding. 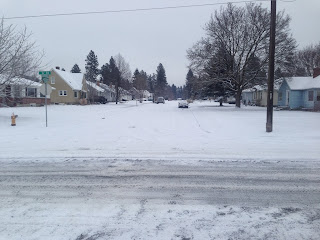 The verdict - good to go for biking to work.  Rolled good on the compacted snow in the middle of the street, worked great on the bumpy stuff, even with the high pressure of 12 psi for a fat bike that I started out with.  It was a little slower in the 3" fluffy snow than a mountain bike or studded tire.  The real test will be the icy ruts and bumps that we get in the streets later on in the winter.  I hope.  The only problem I can see biking to work is fitting the Pugs in the elevators at work.  Hoping it's not the bike that finally gets bikes banned in our building.

After riding in the streets for a while I headed to Joe Albi and to the Merkel Trail. 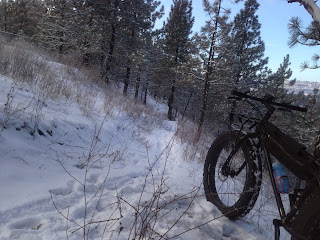 The Merkel trail was a bit iffy in spots and I had to walk a couple times.  I had let some air out of the tires but could've let a lot more out.  Did some semi-controlled sliding on the downhill sections.  It needs riding down a few more times to pack the snow down.

The usual photo ops from the bridge at the Bowl & Pitcher: 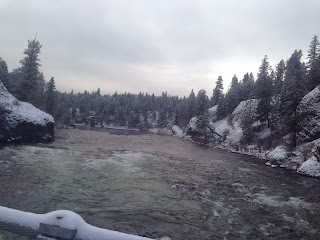 At the Bowl & Pitcher campground I saw another set of fat bike tires heading over the bridge, so I knew there was at least one comrade out there.  I met the maker of those tracks while on the trail up to the Centennial Trail, a chap named Dave on a 7 year old Pugsley.  We chatted a bit, and he noted my front tire pressure seemed high.  I was surprised to see it was, and when I did let more air out later down the trail the bike rode better. 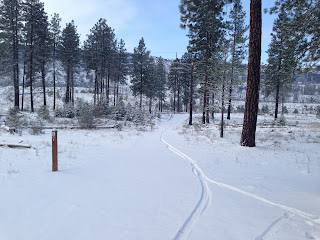 I couldn't stay out much longer, but found a little single track on the way back that was fun to ride.  I forget what trail number this is, but it leads to a rocky, steep unrideable section: 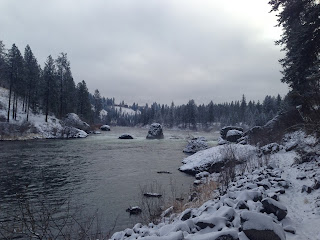 Walked the bike back to one of the other trails to the campground.  I was tempted to stay out longer and  ride more single track, but Xmas shopping was calling.  Here's hoping there's more snow this winter.  But man I hate having to shovel the darn stuff.