This post is a bit wordy...you've been warned.  I won't be hurt if you just look at the few pics.

Let's back up...On The Friends of the Coeur d'Alene Trails website, there is info on the Milwaukee Corridor on the Other Trails page.  The route is listed with directions under Trail #14 Pearson to Marble Creek (map) & Trail #15 Marble Creek to St Maries (map).
The Nor Pac Trail from Mullan to Lookout to the East Portal of the Hiawatha Trail is listed as Trail #9 (map).

This would've been good information to review before the trip but I never got around to looking at it too closely.  I found the website a bit confusing sometimes.  Besides, Duane knew the whole route as he'd taken a group of Boy Scouts on the Loop a few years before.  No problem.  But of course we all ended up going our separate ways.

I did have the Recreational Trails of the Idaho Panhandle put out by the Friends. A good map to have, but with just an outline of the Milwaukee Corridor.  It seemed pretty straight forward. 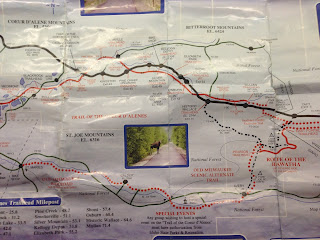 Ok back in Wallace...

It took awhile to get the bikes switched out, but with Debbie's help I got my gear moved from the Bob trailer to the panniers on the blue Redline and a backpack.  Turns out she's an expert bike packer. Probably left Wallace around 11:30am.  I had called Eric earlier and left a message letting him know I was on my way.  He called later and said good, you can make it to Avery.  That would get me back on track I think with our original loose schedule.

I only took a few pictures from Wallace to Avery - in fact wasn't too interested in pic taking the whole trip - as I was concentrating on getting down the road.  Nothing really to report about the ride from Wallace to the end of the TCd"A at Mullan. I was surprised to find I think I preferred hauling my gear in the panniers instead of the trailer.  I have 35mm Paselas on the Redline and they rolled a bit smoother than the Clement X'Plor MSO's on my Vaya.  I wasn't sure how they would handle on the rockier trails past Mullan but I would soon find out.

Made it to Lookout via the Nor Pac Trail: 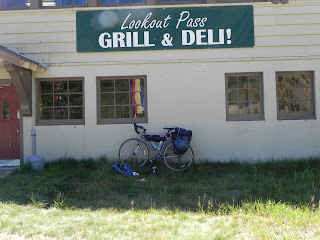 At Lookout ski area I asked how to get to the Hiawatha Trail by bike and the guy at the counter said "you don't have a vehicle or somebody to take you there?" um, no. He said to take the trail to the right of the brown dumpster behind the building. After getting a sandwich and pop, refilling with water, I headed out.  Found a paved road and a dirt trail with a sign marking it as the Nor Pac trail. I didn't realize at this time that the Nor Pac trail headed to the Hiawatha Trail.  After going on it a bit I wasn't sure if I was headed in the right direction so I went back to the ski area.  A woman behind the counter said well there's a big sign and map there.  There was, but it didn't say in big letters "This way to the Hiawatha Trail" which is what people like me need.  But she pulled out a hand drawn map for me (the Wallace RV Park had a similar one showing the way to Lookout) and highlighted the route for me.  I was expecting a short trip to the Hiawatha and it turns out it's a nice 5 mile meandering route down the mountain (except last two miles are uphill) which took maybe an hour or so. Seems like I was on it a couple hours. 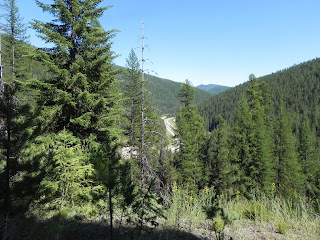 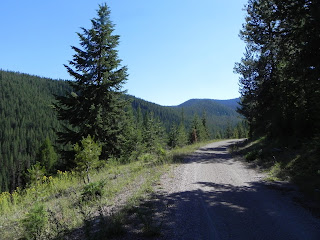 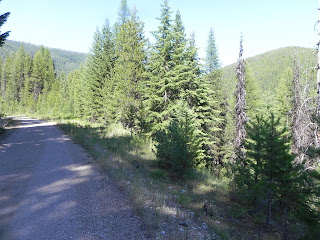 I made it to the Hiawatha trail in the late afternoon and was one of the last people riding down for the day.  One of the Rangers was performing sweep duty and advising people if they wanted to catch the bus back up they ought to hurry along.  She figured by the looks of me and my gear I was riding through.

At the bottom of the Hiawatha at the Pearson Trailhead it's a little tricky to find the Milwaukee Corridor. You take a right out of the Parking lot, and go back in the direction of he Hiawatha, then take a left over a bridge.  There's tall sign (for snowmobilers) with the Milwaukee Corridor logo on it.  It read "well groomed multi-use trail".  Once across the bridge you go left...onto one of the bumpiest, rockiest dirt roads Pasela tires have probably ever seen.  Maybe it's just well groomed in the winter.  It was so rough I wished I had the fat bike.  I seriously wondered if I was on the right trail.  There was no cell service, but my phone's compass assured me I was going south/south easterly so I kept going. And going. Sorry no pics, I was concentrating on moving along.  It was only about 8 miles I think to Avery but it took a long time.  I was riding around in the back woods of Idaho in knickers with a pink speedometer on my bike, but eventually I stopped and asked  a couple of fly fishermen if I was near Avery.  They said "sure you're almost there.  In about a half mile there's a fork in the road, and you take the right fork. It's steep and you'll want to walk your bike, but then Avery is real close." Turns out Avery by bike is not so close.

I get to the top of the hill and it connects to another dirt road.  I can't remember if they said to turn right or go left over the bridge over the river.  I go right and pedal away.  Still no cell service and I realized why it would've been a good idea to bring a Garmin.  Come to a one lane tunnel, and there's no markings relating to the Milwaukee on it.  The guy didn't say anything about a tunnel. At this point the light is starting to fade, but I work up my nerve, turn on my headlight and head in. Come out on the other side fine.  Pedal some more.  I see a guy in a truck going the other way and he's eating an ice cream cone so I figure we must be near a town.  But after a bit I think I must be going the wrong way and I turn around.  Back through the tunnel and across the bridge.  Eventually I wave down a couple on an ATV (lots of ATV traffic) and they inform me Avery is the other way and there's a couple more tunnels to pass through. Oy! Both times that I second guessed myself and turned around, I was going the right way.

It was getting near 7:30pm and I kept pedaling fast, wanting to get into Avery before dark and to reach a phone to call Debbie and let her know I made it.  I could just see a Dateline Special "The Missing Biker".  They'd talk to people who saw me going one way, and others who saw me heading another way.  Just what was he doing out there?

I finally roll into Avery around 8pm.  My contacts are foggy from all the dust and I can't see very well but there looks like a campground on the left. I find a pay phone (yes I used a pay phone for the first time in like 20 years, I didn't know they still worked) to let Debbie know I was camping in Avery.  I ride around but don't find a campground, the spot I thought was a campground is somebody's residence or vacation spot. There was actually some sort of hotel next to it with some young women sitting around, having a good time.  The only campground they could think of was the St Joe campground a few miles back across the River.  I asked about lodging and they said well this is a hotel. I looked around, and couldn't really see very well so I passed on it.  Besides staying at a hotel wouldn't be in the spirit of the trip.  Thought I'll head down the road and find spot.  But a woman at the place I had thought was an RV Park saw me wandering around and told me I could stay in the field next to them as it was Forest Service land.  They'd seen another biker come through but he was hours ahead of me.  I was tired and ready to stop so I set up my tent.

My campsite the next morning: 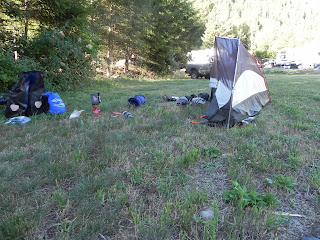 I headed out and lo and behold just over the bridge there's a nice RV Park.  If I'd gone about 20 yards further the night before I would have seen it.  But having camped in a field,  I'm starting to feel like a real bike camper.