Lets see, where was I before we were so rudely interrupted by the Midnight Century?

In my mind the ride from Wallace to Avery is taking on epic proportions, the impossibly rough ride on Pasela tires, the urgency I felt as night fell to get to Avery even though I had all the supplies needed to camp anywhere. But really, it was just a good long ride.

Leaving Avery, I was a bit more relaxed.  I stocked up on fresh water at the little store there, talked to some Forest Service guys who were also heading out for the day.

Outside of Avery the scenery continued to be beautiful. 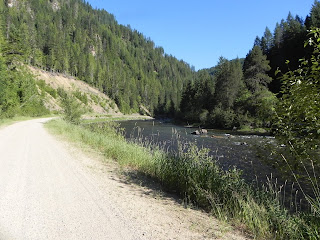 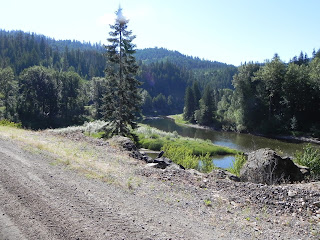 It was going to be another warm day and I considered taking off my helmet.  But then I thought if I come across a bear, maybe it would help to have a little extra head protection because who knows how long it would take me to find the bear spray. Also, I remembered how easy it is for me to crash just riding along and hit the ground hard, so I opted to keep the lid on.

Below is one of the Milwaukee Road signs somewhere along the way.  At first I couldn't figure why the maps were so high up as to be impossible to read, until I figured out they were up there that high for snowmobilers. 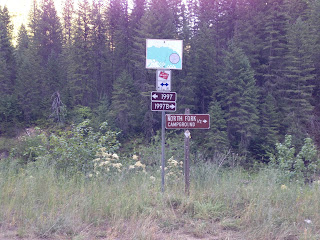 About 7 miles past Avery there is a bridge over the river to the St Joe Ranger District office.  I didn't check it out because I was still in catch-up mode.  Maybe 6 miles more I came to a paved road and the trail ended. (I figured out later it is the St. Joe River Road).  There was a sign for the Milwaukee Road pointing back the way I came but nothing telling me if I should go left or right.  I went right and over a bridge over the river, and then took a left onto a dirt road signed as Potlatch Rd.  It followed the river, so I figured it must be the right way. 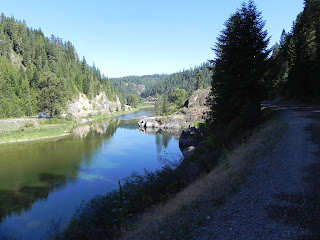 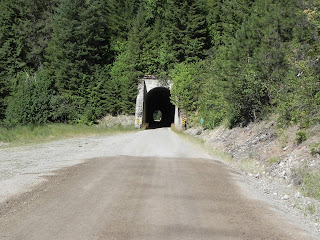 Unidentified biker hanging around the tunnel: 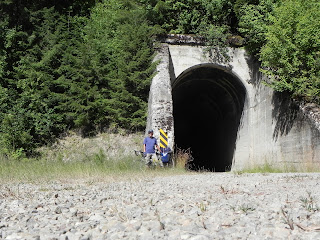 A few miles later I arrived in Calder, and a sign said the Bridge ahead was closed by Order of the Sheriff, or by the County.  Maybe both.  There was a store there that I almost went in to ask if it was passable, but then I thought about it.  The sign didn't say the bridge was out, just that it was closed.  I was a little determined to stay on the Milwaukee Road, so I rode on to check it out.

Sure, there were some planks missing, and a lot of charred wood from a fire, but I walked a few feet out on it. It seemed like it would hold me, and maybe my bike and bags, too. 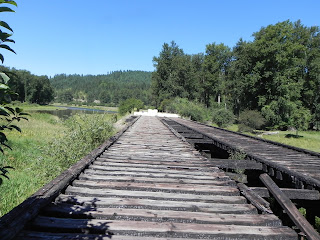 And it did. The creek below didn't look too deep, so if you're unsure of the bridge you could probably cross the creek instead.

This is looking back after crossing the bridge.  I thought maybe this was a campground at first, but it was probably somebody's piece of land.  Nobody seemed to be around, or didn't care what I was up to. 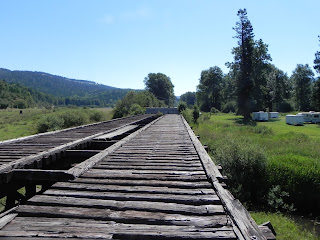 Just beyond the bridge the trail became a little sketchy, but I made it through without any flats.  In the distance you can barely see another barricade blocking off a smaller bridge. 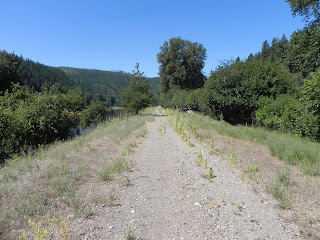 A few miles further was this interesting old steel bridge: 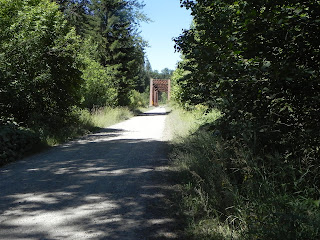 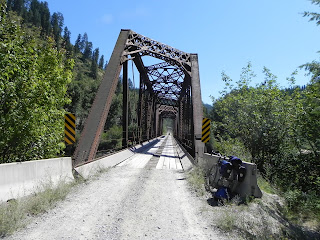 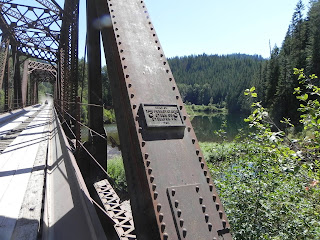 Maybe a few miles past the bridge there was an intersection that had me confused as to which way to go, but I continued on along the road as it followed the river.

It was maybe 15 more miles of pedaling on dirt and gravel road before I reached St. Maries.  I biked around a bit, looked for the bike shop there but didn't see it.  Parked myself at a grocery store with a Zips in the parking lot.  Then, after turning my phone off and on I finally discovered there was cell phone service there, and I texted Debbie to let her know where I was. It was Sunday afternoon now, and I pondered if I wanted to go further.  I thought it was about 30 miles to Heyburn Park on Highway 5, and back in Kellog the guy at the bike shop told Eric and I that it was a death trap.  So I got me a root beer float and a burger at Zips.  Then Eric called, said Heyburn was only 5 - 7 miles away and he had a camping spot.

Feeling refreshed, I hit the road again.  The road wasn't as bad as the bike guy said it was, and there was a little bit of shoulder with gravel sometimes off to the side to ride on. 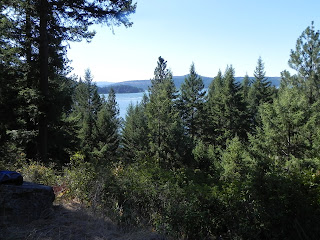 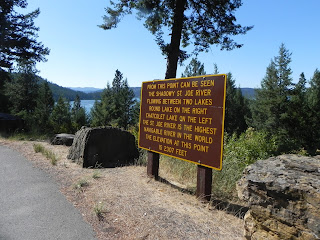 Eric had a great spot for camping that was on the hill above the parking lot.

Wrapping this up - we left early the next morning and made our way on the Trail of the Coeur d'Alene's to Plummer and then over a pass to Fairfield.


I forget just which roads we took back to Spokane. Stopped in Fairfield, talked to some of the locals. Took a break at the Freeman store and got an ice cream cone.  I was hoping to lose a few pounds on this trip, but I think I managed to consume as many calories as I burned.
We rolled into Spokane's South Hill around 1:00 or 2:00 maybe.  Eric and I are both thinking we might have to ride this again, with an extra day or two to explore some of the many side trail and roads along the way.

I used to get embarrassed when people would introduce me to others as a strong cyclist. I think of the roadies who are actually in good shape and ride fast, or the other cyclists who ride long distances as the strong bikers.  I tell them I'm just good at working the gears, finding an easy gear and spinning, not working too hard at it. Now, after this ride and the Midnight Century, I don't think I'll be embarrassed if called a strong biker. I know I'm not real strong, but I seem to manage ok.