Bitterroot Loop and then some

Back in May I ran into Eric E at the Bike to Work Breakfast and he mentioned a ride he was going on in July. Something about going past the end of the Hiawatha Trail and riding on the old rail bed / forest roads in the area. That caught my attention.

He knew a guy named Duane who had been planning this for a year.  After a few more discussions, the plan was this: ride out from Spokane to the Trail of the Coeur d'Alene's in Plummer and do the Bitteroot Loop.  The Bitterroot Loop is a combination of the Trail of the Cd'A, the Northern Pacific Trail (Nor-Pac) and the Old Milwaukee Corridor: after the end of the paved Trail of the Cd'A at Mullan you climb up the dirt Nor Pac Trail to Lookout Pass; then from the ski area follow the Nor Pac down and up again to the Hiawatha Trail's East Portal Trailhead; at the bottom of the Hiawatha Pearson Trailhead follow the Old Milwaukee Corridor from Pearson to Avery, Calder, and St. Maries. The Milwaukee Corridor is the same old railroad bed as the John Wayne Pioneer Trail, and it was this part I was most interested in.

Duane, his brother Larry, Eric and I left Duane's house early Thursday morning and took Valley Chapel Rd out of town. I was pulling my BOB trailer, the others had their gear on racks and bags.  We planned to camp at Heyburn State Park on Chatcolet Lake, about 6 miles past the beginning of the Trail of the C'dA in Plummer.

We started out great, a beautiful day.  I hadn't ridden on Valley Chapel Rd before so this was a new treat for me. 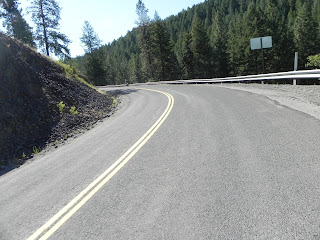 Larry had an unfortunate fall from his bike outside of Worley, bruising his back, from which he never recovered fully.  We made it into Heyburn late afternoon. 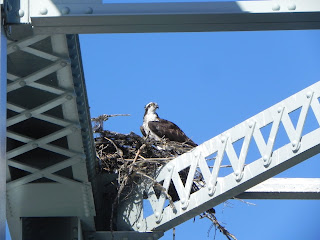 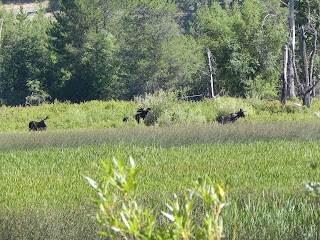 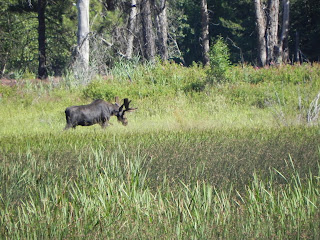 We stopped in Harrison and visited the bike shop there which also has an espresso stand.  They make a great cappucino!  At this point we decided to camp in Walace instead of near Lookout Pass.  However, the heat and pain was taking its toll, and  Larry wasn't able to continue past Cataldo, so we parted ways - Eric and I continued on to Wallace, Larry and Duane heading home.

We had a nice camping spot at Wallace RV Park and got dinner at the brewpub there.  Next morning as I started out, I felt resistance on my pedal and then something snapped - my derailleur hanger busted,  the BOB axle was bent and the derailleur cage was bent. I'm not sure what happened - I was in a higher gear than usual but hadn't had a problem pulling the trailer before. I was done for.  I didn't want to make my wife haul up another bike for me, and I wasn't sure which bike at home would work, didn't want to make Eric wait. I called and left a message for Debbie to pick me up.  Eric headed up the trail alone.

Well I must've sounded pretty pathetic, so my Debbie texted me back and said there's gotta be a bike she could bring me that would work.  The blue Redline already had a Topeak rack on it, I had new Ortlieb bags that I didn't know if they fit, but we also had the Topeak bags.  She drove to Wallace in record time.

I think I'll break here and fill in the rest of the trip another post.