Since my ride home often takes me down Post Street, I've been wondering how the city was going to manage the connection between Riverfront Park and the new Centennial Tail section that will pass under the Monroe Street Bridge on its way through Kendall Yards.  I know slowing down to turn left onto Bridge St from Post can be dicey if there's traffic bearing down on you from behind.

The Getting There column in Monday's Spokesman Review details plans to turn Post Street between Falls Blvd and Bridge Street into a one-way northbound street with a 12 foot wide bike lane on the east side of the Street Bridge.  There was also an open house (8/19 Getting There) last week  but I missed it.  There will be angled parking in front of City Hall; Post north of Bridge street will be still be two-way but with two lanes and a center turn land instead of the 4 lanes now and there will be parallel parking spots on both sides of the street.  I'm not clear if the bike lane is only on the bridge, or if it's from the Blvd to Bridge St.

This is how it looks now: 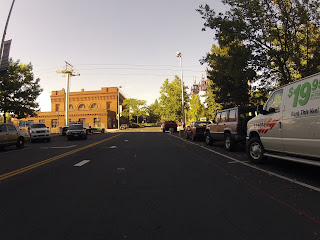 Sometimes impatient traffic behind will pass me, (you know they're in a hurry to get to the stoplight at Broadway).  I might feel a little bad about slowing down traffic, riding outside of the door zone.  Then one day I noticed the 20 mph speed limit sign halfway down the block across from the Avista building.  Now I don't care if I'm slowing down anybody since I'm usually going 15-20 mph here, and motorists should be going slower in this section anyway.  Especially with all the foot traffic.  I've been thinking the limit on Spokane Falls Blvd and streets in the downtown core should be 20-25mph also.

This sounds like a good plan, I'm interested to get more details on it, hopefully next week.  I figure depending on my mood, in order to go west I'll either take the Centennial Trail or go up to Broadway.  It'll be good to have another option.