My wife was out of town for a couple days so this meant I was on my own for dinner.  Not that I can't cook or don't share in the nightly dinner duties (he says somewhat defensively), even if that means going out to get Chinese or Mexican or heating up some frozen box of processed food stuff.  But I usually take the opportunity when Debbie's away to eat something that she doesn't like.  Like  greasy KFC or Skippers; her coworkers usually take bets on which one I'm going to get. 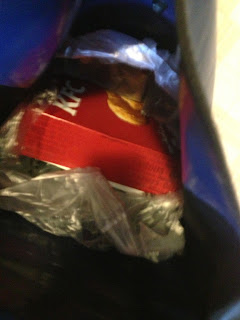 I do love deep fried seafood, but the Colonel won out this time. Besides, for a while my bike ride home took me behind Skippers; I got sick of smelling that Skippers Grease and the thought of it still makes me feel queasy.
I almost went through the drive-thu at KFC on my bike, but instead took it inside and ordered the 3 piece dinner.  There's probably a thousand reasons not to eat at KFC; luckily I think I'm finally burnt out on it.  I might have to actually eat something healthy next time she's away.