Another One Got Fat


I got this the weekend before last and was finally able to get out and give it a good ride Saturday. I fearlessly headed out with only one tire lever and no tire sealant looking for my first flat.  As I rode down the street from our house to the Merkel Trail to Riverside State Park, I felt like I should be wearing one of those black army-style helmets the Harley guys wear.

The Merkel trail is loose and gravelly in spots, but holy cow, this beast held the trail and it was a blast rolling down the hill.  Out at Riverside I did notice it took a little more effort to get rolling sometimes, but once moving there's a lot of momentum to keep you going.  It was fun rolling over the rocky trail sections instead of trying to find a line in between the rocks or bumping the rim against the rocks.

Having just gotten the Vaya in December and now this, I feel like a real lucky dog.  Out on the trail I felt even luckier when I heard a loud crack! behind me.  Turned around and saw the top of a tree fell off and landed right where I just rode by.  That might've hurt. 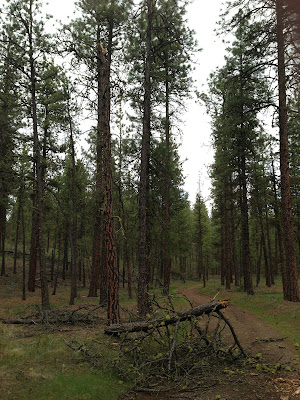 I'd been thinking about a fat bike for awhile. There are quite a few different brands to choose from now, Surly, 9:Zero:7, Salsa, Fatback, On One and Origin and more.  I get stuck on bike brands, so of course I was interested in the Salsa Mukluk.  The 9:Zero:7 was a contender and I came close to deciding on it.  I hadn't even considered the Pugsley much with its steel and offset frame.

Then I read over at the MTBR forums that a guy was able to hook up his BoB trailer to his Pugsley.  Hmmm... So I started looking a little closer at them.  But Pugs (and also Mukluks) were in scarce supply.  Then suddenly a couple weeks ago Universal Cycles had a ton of standard Pugs available and I was hot to get the red one.  I checked around and a nearby shop had a large Neck Romancer available, their last one for the season.  I didn't think it was what I wanted, but I drove over to give it a try, and check out the sizing.  It has a Moonlander fork and wider rims than the standard Pugsley going for it in its favor.  The Necromancer only comes in black, which I wasn't too keen on.  But riding around in the rain in the dirt and sand by the bike shop, it grew on me.  The shop said they could deal on the price.  And you already know the rest of the story - it came home with me.