Trail 25 Where Are You

I've been riding out on the 25 Mile Trail at Riverside off and on this year, the goal being to complete the loop.  Didn't ride it much in the summer heat, but earlier this year I started out by the Bowl and Pitcher and followed it north along the river to Seven Mile Road, and then lost it at the Carlson Rd Trailhead somehow.  And that's been the story whenever I head out on it.  I'll follow parts of it along, and then come to an unsigned fork and take the wrong fork, or lose it when it crosses a road.  I should head out with someone who knows their way around Riverside, but my rides on it have been those unplanned ones where I just head out at the last minute with no destination in mind.

Saturday I woke up, wasn't planning on riding.  Was going to get some things done around the house but then decided to head out and figure out the rest of the trail instead.  I took my usual ride down the Merkel Trail, then to the Bowl and Pitcher, up to the Centennial Trail to where Trail 25 crosses it by the road to the Equestrian Area. This is the second time I started out here to go counterclockwise and try to make it to the Carlson Trailhead from this direction. 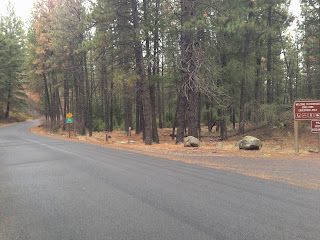 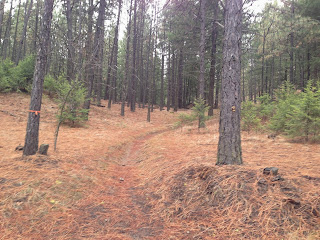 There's one or two tricky parts where it's not clear which trail is 25, but after a few miles I reached Old Trail/Inland Rd and the edge of the ORV park. 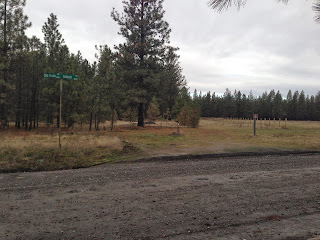 Then after the ORV is the part that stumped me last time I was out - the intersection with Trail 300. Arriving at the sign post for Trail 25 & 300 from below, all I saw was an arrow pointing back the way I came for Trail 25 and one to the left for Trail 300.  There's a steep hill behind this sign which I hauled the bike up and followed a trail to a no trespassing sign; Trail 300 took me up the hill to the same area and a Trailhead on Garfield Road.  There's a sign there for Trail 300 that says access to trail 25, which baffled me because I knew 25 should continue on somewhere but all I could see was it leading back where I came from. I rode around a bit and then hiked down the hill to the Trail 25/300 sign.

This time I took a closer look around, and noticed what looked like a trail in the other direction of the arrow for trail 300.  Aha! 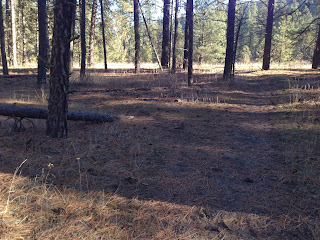 Below: I missed the trail veering off to the left here and went right following a lot of hoof prints. Man this was bumpy and frozen sandy - made me wish I brought the Pugs.  Eventually came to a trail marked as #25 and backtracked to this spot.  You can see the trail and a Trail 25 signpost to the left middle of the pic. 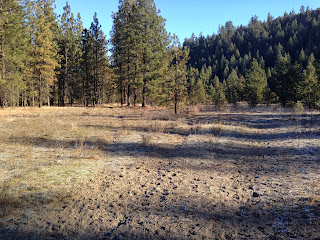 I actually have the park map produced by the Inland Empire Back Country Horsemen, and I was really wondering how I'd left home without it (again) - it shows the 25 Mile loop. That and a compass would've helped a lot.  As it was, both my phone and Garmin died and I was left trying to go by memory.  After a bit the trail led to the ORV area again and Trail 25 Mile Marker 9.  Then the trail headed directly into the corralled off ORV park and ended.  I was stumped again.  I hiked up a hill and saw what I figured was 7 Mile Rd, went back down to the 9 Mile marker. Went into the ORV Park and had some fun riding on it, but didn't see any sign of a trail for horses, hikers or bikers. Made no sense why the trail would be in there.  So I followed the fence line inside the ORV park up to 7 Mile Rd, found a trail between the road and park and came unto another Trail 25 sign pointing across the road.

There wasn't a sign for Trail 25 on the other side so I rode north-eastish to the Pine Bluff Rd parking spot.  Still no signs for the trail anywhere so I took a trail that headed down a ravine, across either Coulee or Deep Creek. Stopped to take a pic of Deep Creek area.

And then made it up to the State Park Rd to get my bearings.  I figured this wasn't right, so I backtracked to 7 mile Rd/Pine Bluff and found a trail that headed west and I figured must be 25.   But now I'd been out longer than I planned due to all the backtracking and exploring I did so I decided to head home.  I took 7 Mile Rd past the intersection with Inland Rd and the State Park Rd, turned right onto the gated-off gravel road.  Took a Trail marked as 25 that I knew from past rides would head back up to the Inland/Old Trails ORV area.  This is one of the maddening things about Trail 25 - some of the Trail 25 signs I think aren't for the actual trail, but are for trails leading to it.  But it's also fun exploring the different trails out there.

I didn't feel like taking 25 back down the way I rode up, so I took a steeper trail (204?) down and headed back to Spokane.  It was a good ride, I wasn't sure where I was at times but could tell I was heading towards the river after awhile.  I thought briefly it wasn't a good idea riding around unfamiliar territory without a map or cellphone, but knew I could always find the river.  One of the things I like about Riverside - even with my sense of direction I can figure out which way is Spokane.  Sometimes you just have to listen for the reports from the Rifle Club on Aubrey White Pkwy.

I think all I have left to figure out of the 25 Mile Trail is the section between the 7-Mile/Pine Bluff Rd area and Carlson Rd.  Depending on the weather, might be able to ride the complete loop this year.  Maybe, just maybe I'll get it all figured out.