This is why I don't have a fatbike... 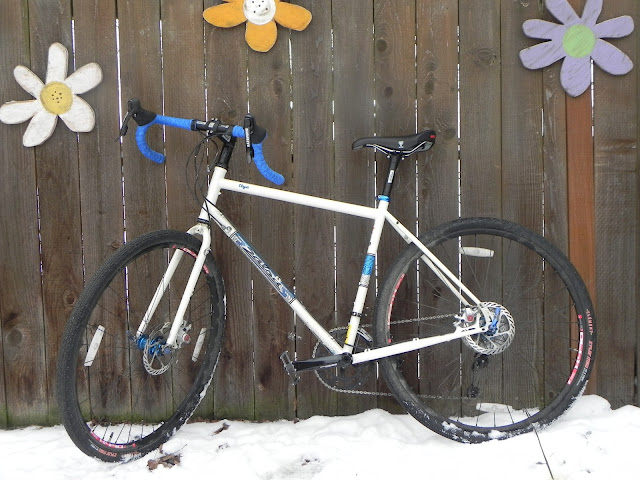 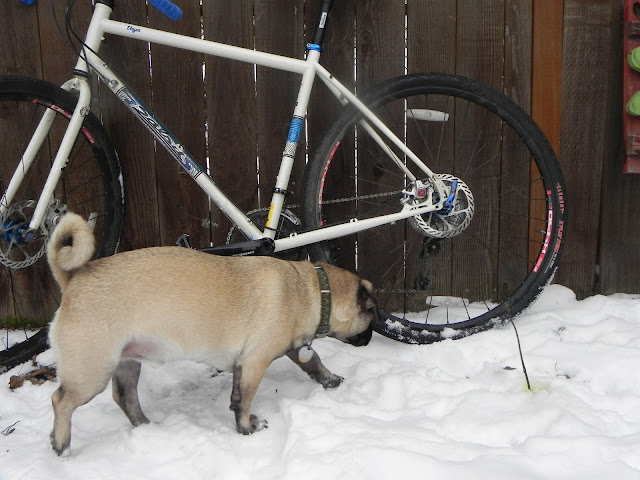 Salsa Vaya 2. Haven't even taken the warning sticker off yet: Don't let your dogs pee on the tires.

More so than a 'cross bike, I think this will be a perfect all-around street / gravel / dirt / commuting / touring / Ephrata Gran Fondo / midnight century type vehicle for me. It reminds me of my good cross bike in the way it wants to jump forward with each pedal downstroke. A little turbocharged. I think I'll get front and rear racks, but fenders might have to wait until the stock 40mm tires wear out - specs say it has clearance for 38mm tires with fenders, 42 without. Right now I'm enjoying it without any accouterments.

I was yammering on so much about Salsa's Vaya bike that my wife just said "why don't you go ahead and get it", I think so I would shut up about it.  Funny thing is she thought I was talking about a fatbike when I was mentioning the Vaya.  Well,  I was probably talking about both at the same time.  But I had the green light to get a new bike, that's what counted.

Originally I wanted the 2012 orange model, and found one listed in one of my sizes (55cm) at Old Town Bicycle in Tacoma. But the new vanilla and blue 2013 color combo grew on me, and has BB7 brakes instead of BB5. Also, I read here that white bikes are cool.

I was hoping to get over to Tacoma to check out the orange one when we were in Seattle last month to see King Tut and the Chihuly Museum.  But we were with friends and I didn't want to drag everybody over on a bike hunt.  Then we stumbled across a bike shop in Fremont I somehow hadn't noticed before - Free Range Cycles.  Debbie saw the Surly and Salsa bikes outside the store even before I did.  She's got a good eye.  Luckily, I'd kept the bike rack on the truck just in case.

They had a few Fargos (also tempting) and Vaya 3's, and then there it was: a slightly large for me 56cm Vaya 2. The bike guy at Free Range helping me pointed out they raised the handlebar.  Coincidentally, or not, they had some copies of Just Ride displayed prominently at the counter, in which the GP extols the benefits of a raised handlebar. He also mentions that it basically shortens the effective top tube length.  Who knew, geometry is not my forte. At the time, Universal Cycles was out of 54 and 55 sizes, and the local shop was fairly vague when/if they would get any more Vayas in or if I could order one.

The 56 felt good, and fit better than a 56cm Vaya 3 I'd ridden before, perhaps due to the raised handlebars. I also like a little larger bike anyway than what the bike fit calculators say is good for me.  I'm barely 5'8" if I spike up my hair.  So I had a tough choice to make.  Get this Vaya, or hope I find a 54 or 55 Vaya somewhere else, or make some upgrades to my blue Redline and keep it for my all-arounder, and get a fatty.  It was a tough call, and there have been a few times I have second guessed my decision since I haven't had much chance to ride it with the snow and ice we've had lately. It doesn't help that the blogger known as 26inch Slicks keeps posting those great shots of his fat bike rides. But this Vaya is a keeper.
Posted by Wileydog at 8:46 AM