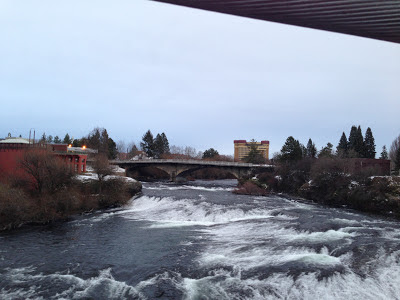 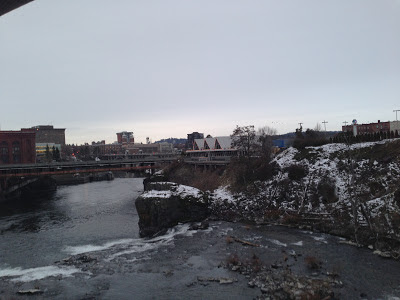 I get off work at 4:15pm and got out the door a few minutes later than usual today.  I usually ride north on Post Street but instead went through Riverfront Park. Mixing it up. But something didn't seem quite right.  I stopped on the pedestrian bridge north of Post Street and looked around.  Hey, it's still light out!  The cloud cover that has hung over Spokane for the last 2 months had thinned out and combined with the later sunset left me some daylight to ride home in. Woo hoo!

Riding in January's snow has been challenging at times.  We had a good 7" or more snowfall early on.  That snow wasn't too bad because after a couple days it packed down, but the dry couple inches that fell on the 11th or 12th wore me out.  That snow just refused to pack over the previous snow, and it was tough to get any traction.  It was like riding through dry ice slush.  Couldn't decide if mountain bike tires or the studs were the way to go.  This went on for a week or so, till this lucky dog got to accompany his wife down to Disneyland, where she and a friend did the Tinkerbell Half Marathon on the 20th.  Oh man I love the blue skies of Southern California! Between that excursion and the flu, I only slogged my way to work and back one day last week.

The last few days we've had light snowfall that packs down and riding has been a little easier, but I'm getting real tired of it.  Have to be careful of the hidden ruts under the fresh snow.

And why does it always have to snow overnight? I wish it would wait until after I left for work so I wouldn't have to scurry around getting ready for work and shovel. It hasn't even been a harsh winter around these parts, and we're probably due for a blizzard or two still, but with the little bit of sunshine behind the clouds today, I hope we've turned the corner on this winter.