The ride from Tekoa to Rosalia took us from a lush, green landscape with rolling hills, to a more arid country.  Now, heading out of Rosalia, we came across a pine tree here and there, and then more.  I thought we must be heading north a bit, up towards the Ponderosa Pine forests that begin east of Spokane.  (If I'd bought the compass that goes on the stem cap to match Pat's thermometer/stem cap, I might've known for sure). 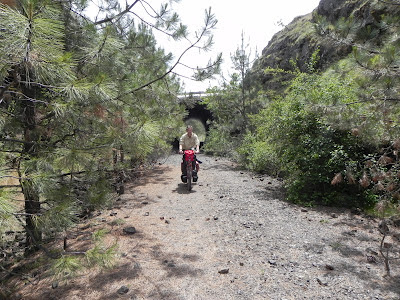 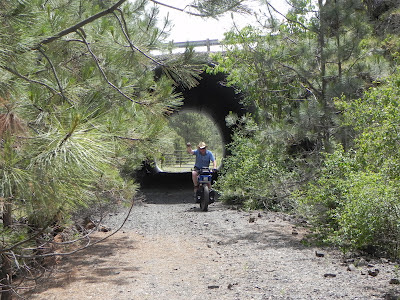 I lagged behind a few times starting in this section.  I think I was feeling the effects of backtracking earlier to get my sleeping bag.  We had a slight upgrade, and usually the railroad grade doesn't bother me, but I might've been a little tired.  Luckily, we had a few stops to check out the scenery and abandoned buildings on the trail which allowed me to catch up. 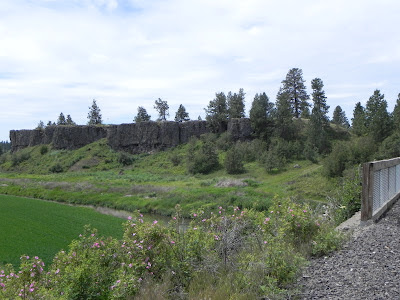 A trestle over the creek that feeds into Rock Lake.  Don't strain your eyes, but if you look hard enough, you can see the remains of a boxcar to the left of the far end of the trestle: 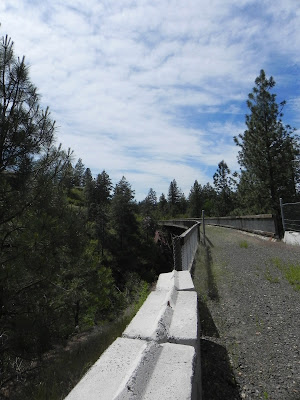 Pat's fat bike next to the derailment: 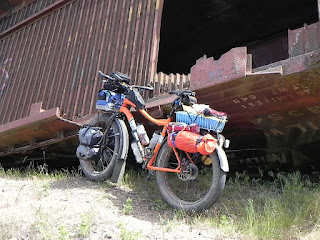 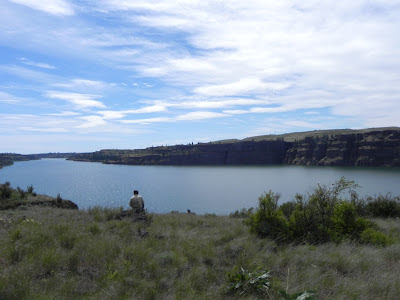 Rock Lake is one long lake, but it was a very scenic enjoyable segment, with just a few challenges.  We had to portage around some rock fall a couple times, the trail completely blocked off in one spot by big boulders.  We unloaded the bikes and carried everything over the boulders. I unloaded the trailer, unhooked it and carried it over.  I was glad this time that all my gear was in the Dri-Sak so it was easy to carry in one trip, but other times, having all my stuff in one bag made it difficult to look and find things (like my pump - see below).

There's one section of the Rock Lake trail that a landowner won't let trail users onto, so you're supposed to detour off the trail.  Depending on how you look at it, it's not clearly marked on the trail where this section is. I mean, I don't remember any No Trespassing signs.

At the end of Rock Lake we got onto the road and went to the parking lot area to refill our bottles with some lake water.  The water was a little murky, perhaps stirred up by the boaters and campers nearby.  I tried using the filter-top on the bottle that came with my Steri-Pen, but it turned out it would take forever to get even a cup's worth of clear water in the still lake water, so I filled up from Pat's gravity filter.  Even though it was good water, I zapped it with the Steri-pen anyways - I wanted to get some use out of the $50 some bucks I spent on it.

I had a little moment of panic before we left as I couldn't find my pump. I'd noticed my back tire was a little low while riding on the pavement, and wanted to top off my tires. I knew the pump was the first thing I packed, but it didn't seem to be anywhere.  I didn't want to ask Eric or Pat if I could borrow their pump, because, one, that would just be too embarrassing, and two, I wasn't sure if they had Presta valve adapters on their pumps.  So, as we rode off to connect with the trail again, I kept my fingers crossed and hoped I didn't have a slow leak.

Back on the trail, just past Rock Lake. We had definitely left the rolling hills of the Palouse far behind and were now in the flat steppe land of eastern Washington: 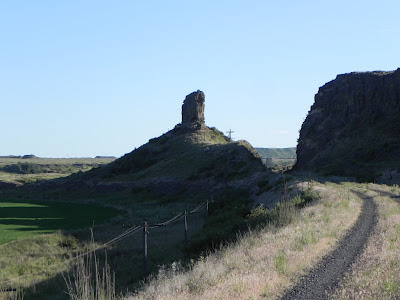 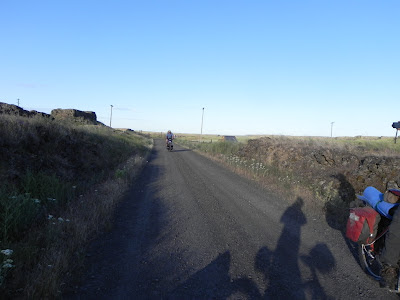 Towards evening, it looked like some clouds and maybe a weather system was moving in, so we stopped to set up camp here.  I did find my pump while unpacking, which made me feel better. 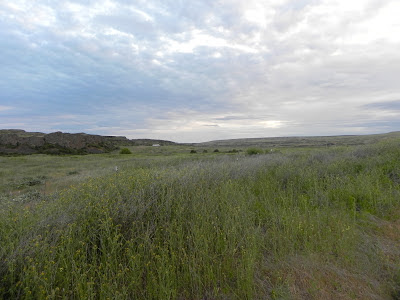 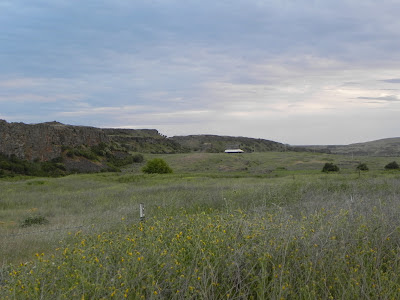 We couldn't tell if there was much rain in the clouds, but I took the opportunity to set up my $7 emergency tube tent anyway. I went inside to test it out and see how comfy it was, but I couldn't get back up after laying down.  Even though it was still early, and I thought I should get up and talk to Eric and Pat,  I soon fell asleep.  I guess the extra backtracking I'd done earlier had caught up with me.

Next and final post on this trip: The wind began to howl
Posted by Wileydog at 10:43 PM