OK let's finish this up...I kinda lost interest in writing this up after a month had gone by, and then my memory started fading, so if any one's still with me here goes. Some details, like where we camped or which roads we took, may be off.

We were rained on just a little bit on Saturday night, but the wind picked up and the tube tent was flapping noisily and waking me up off and on.  I finally tore it down around 3 or 4 and slept in the open.  Sunday morning arrived bright and early, another beautiful day with a little breeze (cue scary violin music).

Had an early morning visitor checking out our campsite: 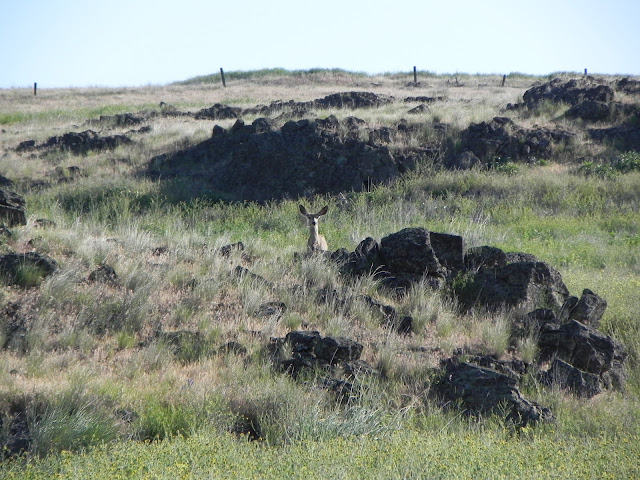 Eric offered me a Via packet and hot water to make coffee, which I happily accepted.  I had packed some Via packages somewhere in my bag but didn't bring along a little jet stove to heat water with, so I was operating without coffee the past couple days. Roughing it.

Memory is fading a little, but I think our campsite was between Rock Lake and Ewan: 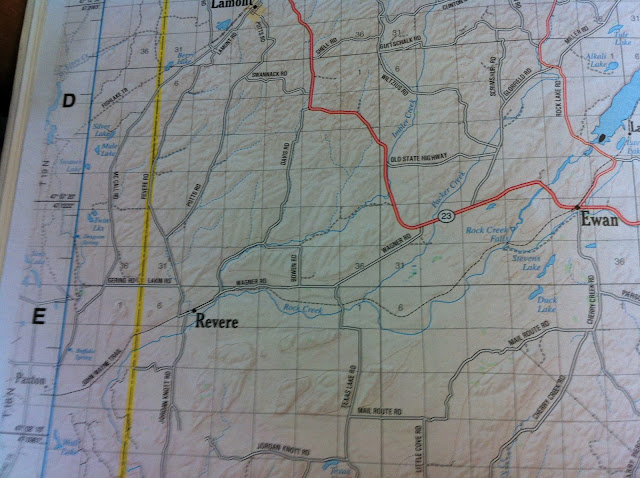 Somewhere along the line we ran into a headwind, a slight uphill, and rockier trail conditions and I lost interest in picture taking. Below is the last pic I took on Sunday. I think this is somewhere after the MacCall/Paxton area,  after we went under the Columbia Plateau trail trestle. 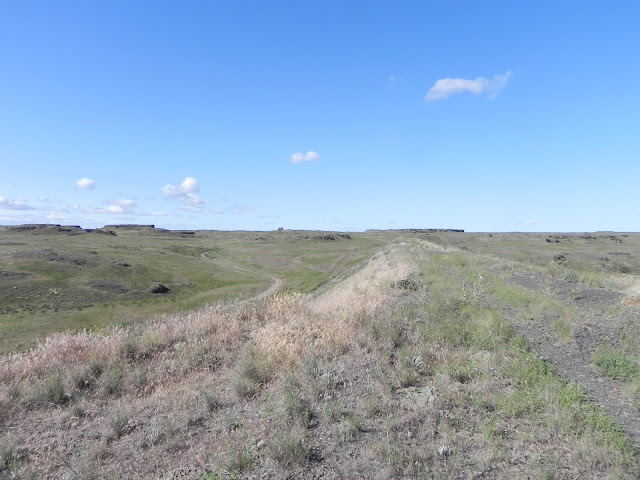 On second thought this might be before Revere. Either way, it leaves a lot of trail I didn't document.  Luckily, Pat, though slowing down on his own picture taking frequency, did take some pictures of this section for the historical record and they can be found in his report Crossing Washington on the JWPT - Day 2.

I was pretty happy with my mountain bike and trailer setup on this trip, but riding next to Pat in this section I became a bit envious and slightly covetous of his fat tires.  My front tire, probably overinflated above 50psi, was bouncing off the rocks all over the place and my handlebars were going every which way with each jolt so I was constantly making steering corrections.  Pat's front tire just plowed on straight ahead, paying no attention to those little pebbles in its way.

So we continued on, pedaling away.

And then we came to Marengo.

The wind was picking up. We watched the UP train stop here before its line took it south to Thavis.  Our line headed towards Cow Creek, and the section marked "impassable" on the official trail map, due to the trestle over the creek being torn down.  The official detour is up to Ritzville but none of us were thinking of going that way.  Eric had ridden through the Cow Creek section on a previous trip during the dry season, but we figured it was too marshy and/or deep to get through now in mid-June when the creeks were still high due to spring runoff and the recent heavy rains we'd been getting.  The thought crossed my mind, and I'm sure Pat's and Eric's also, to forge ahead and check it out, but I thought it'd be a shame to have to backtrack if we got to Cow Creek only to find we couldn't cross.  Drinking water was a concern, but I mentioned I still had a half gallon in the trailer.

So there we were, above the "w" in Cow Creek Road on the map below: 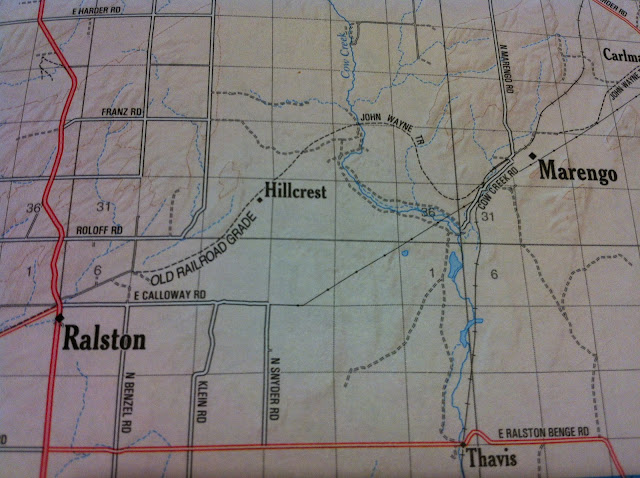 One option was to ride the active rail line down to Thavis.  There was also a dirt road staring at us across the intersection with the UP railroad, posted no trespassing, daring us to try it, but it wan't clear where it went. We rode down Cow Creek Road, which looked promising, but it quickly petered out into a couple dirt roads marked with no trespassing signs.   One road appeared to lead where we wanted to go -  but it looked like it disappeared into the dirt. If we took it, would we come across an upset landowner, or would it stop in the middle of nowhere?  Also, there was a small bluff blocking our view of where this road might lead to, if anywhere. We debated, we rode a bit, turned around. I called my dad - 90 years old last March - and left a message wishing him a happy Father's Day.  We thought about it some more. Poured over the maps.

Looking at the above pic of map 67 of the DeLorme Washington atlas, which I bought after the trip to figure it out, you can see the little mouse turd markings of the dirt roads I think we were looking at.  It appears they would've headed back up to the trail.  It also appears one of them is still on the wrong side of the creek.  Who knows?  Someday I hope to find out, and also ride the Cow Creek section.

In the end, we spent a lot of time here and we just had to make a decision.  I was onboard with riding the railroad line, I think we all agreed it looked like our best option.  Rails to trails to rails.  It was only a short 3 mile ride to the road.

Right! I quickly discovered riding the railroad wasn't easy, especially with the trailer dragging behind me. Tried riding down the middle, on the edges, to the side when we could. Soon we were all walking our bikes, riding every once in awhile, but mostly walking. And walking. And looking back every once in awhile - the train had already gone past before we started down the line, but ya never know when the next one is coming. Longest 3 miles, I thought maybe we miscalculated and it was actually 10 miles to the road.

We finally reached the Ralston-Benge Road Rd and headed west.  The wind really started up, gusting above 20 mph, and we were riding into it.  Mostly uphill of course.  There was a tree off in the distance at the top of the hill and it became our focus. I just kept my head down, tried not to look up too often at the tree that wasn't getting much closer, and keep pedaling.  Eric was amazing, pedaling up ahead of Pat and I.

Eventually, I mean real eventually, we reached the intersection with Klein Rd where the tree was and stopped to rest.  Filled up our bottles from the last half gallon in the trailer. Took a well earned rest.  I really wanted a hamburger or pizza.  And a tall cold beer.

Klein Rd was a real slog. Gravel, rough in spots. We weren't heading straight into the wind anymore, but the sidewind was just as bad, much to our dismay.  At one point I was thinking to myself, when or if I get back home, I am only going to ride on the street to and from work, no more off-roading for me.  I am sick of riding, just keep pedaling.  I looked over at Pat, and he was thinking the same - he said something to the effect of To hell with this bike business! I agreed.

We finally made it to Ralston maybe around 4 or 5? and stopped at the small Memorial park there.  We were sort of in limbo, and way off schedule.  The mood was somewhat sober, yet I was also happy we were back near the trail.  It was only a hundred yards away.  We hung out, ate, napped. I wished I'd remembered to bring a book, or playing cards would've been nice. I half wished I'd chanced bringing a mandolin to play, but I wasn't sure how I would've packed one without it getting broken.  Lucky for Eric and Pat I didn't think until after the trip about bringing a tin whistle along.  Small and portable, but my playing is terrible squeaky.

At one point I walked over to check out the trail, and read the sign: Cow Creek trestle out, 5 miles, no admittance (or something like that). Only 5 miles!!  We had spent I don't know how many hours detouring, and we were only a little more than 5 miles from where we started. That hurt.  A nearby road sign said Lind was about 16 miles away, and that had been our goal to be there that afternoon.

So we generally decided we weren't going any further that day.  Time to sort things out.  It did cross my mind after I'd recovered a bit to strike out on the trail and see how far I could make it before nightfall, but the wind was still howling.  It didn't seem right to leave on my own,  Checked the weather forecast, and it was more of the same, with chance of rain.

We weren't sure if overnight camping was allowed, so we waited towards dusk before setting up our tents and bags. Woke up fairly early Monday morning.  There were a few options for advancing forward.  My wife was on standby to pick me up in Ritzville, Lind or Othello and could take Pat and Eric to Othello to get them back on schedule.  Pat's wife was able to pick them up also.

Ralston is only 10 miles from Ritzville.  It would be easy for me to ride up there and meet my wife for a ride back to Spokane, and she wouldn't have to drive too far. I wondered how far towards Spokane I could get on a backroad, because part of me didn't want to use motorized transport.  I did have Tuesday off from work also.

But Ralston looked like an easy spot to get to for a future ride to continue on the trail, so I decided I would end my John Wayne Pioneer Trail trip here.  Pat and Eric headed west on the trail, I up north on the pavement. They are good riding companions, and hopefully we'll get the chance to ride together again.