(apologies to Jan Heine who wrote a post titled "the Lure of Racing Bikes" over at the Bicycle Quarterly blog Off the Beaten Path).

I started out commuting on a Huffy mountain bike, moved up to a Marin Muirwoods with Continental Town Ride 29 X 1.6 tires and now ride it or my Redline Conquest Sport beginner cyclocross bike with 32mm tires to work. I don't think I gave too much thought to tire width when I got the Marin, but I knew the wide tires were a benefit on the city streets compared to a road bike's narrow tires.

I've been riding the Redline to work for at least 1 1/2 years, and by the looks of the front tire, I thought they were lasting pretty good. I'd peer over the handlebars at the front tire and not see any wear.  Then one day I looked under the fender at the back tire and saw with a shock that the top of the tire had almost turned into a slick. First thought was "Guess I should pay closer attention!" (Also thought I should rotate my tires, but Sheldon Brown put an end to that thought in his article Tire Rotation.)

The 32 mm Kenda Eurotreks that came with the Redline worked fine, but had a slightly thick tread pattern that picked up a lot of road vibration on rougher streets. Finally, I could justify getting one of the tires I'd been considering switching to, like the Vittoria Randonneur Cross, Panaracer Pasela Tourguard, Bontrager H2, or Schwalbe Marathon. I also wanted to try a little wider tire for the rougher sections of the city streets I ride on.

In the meantime, I took my bike in for a tune-up, and when I went to pick it up, the rear tire had gone flat and the shop discovered a hole in the sidewall.

That's how I ended up with mismatched tires: 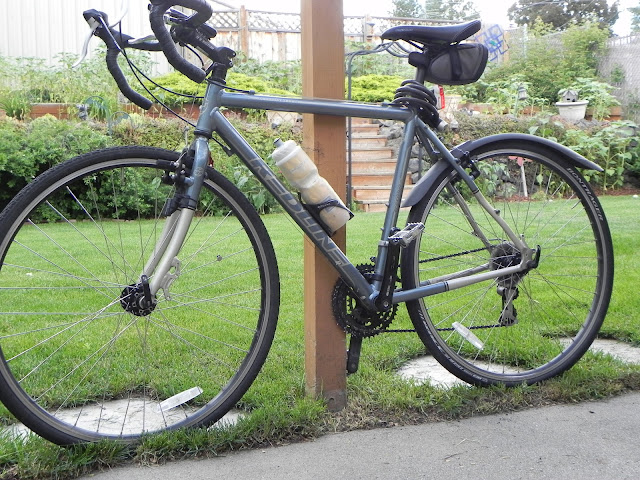 The shop had a 32 mm Bontrager Race tire with a smoother tread than the Kenda's that I decided to give a try, instead of the other tires I'd been thinking about.  It's more of a road bike style tire, and it's smooth and quick. But I don't feel comfortable on corners or gravel patches.  It felt like the tire was slipping around the corners, especially some faster turns I take where there's still some sand left on the streets from winter. And I wasn't sure how well they'd do in the rain.

After a couple weeks I started getting used to them, but still wanted something with a little more tread pattern. And the mismatched look was bothering me (ok I'm a little neurotic), so I broke down and ordered some Pasela Tourguards.  It helped that they're less expensive than the other tires.  I went for a little wider width, 35mm, despite concerns I'd have trouble fitting fenders over them on this bike.

They mounted easily, except in the process some black from the tread rubbed off on to my hands and transferred onto the sidewalls. I'm not sure about the sidewalls - they seem a little thin but I was aware of that before I bought them. Reviews are mixed, and some people report they cut easily, but I don't plan on riding off road much on them. Should be ok. I hope.

The writing on the sidewalls state to inflate to 90 psi, but that seems excessive so I inflated them to 80 and took them for a spin last night.  I like them.  Cornered well and the ride was smoother than the Kendas. Not as fast as the Race tires, but I can live with that. They don't list a minimum pressure, but I'm going to try about 65-75 psi and see how that works.

One problem - the tire did rub against the back fender and I'm pretty sure it'll rub against the front also. With some fiddling and trimming I might get the fenders to work, but perhaps this bike is meant for 32's at the widest with fenders.