As you may recall or know, Pat (26inchSlicks blog) threw out an open invitation for others to join him on his cross-state bike tour.  I signed up for the first weekend section, intending to ride from Tekoa to Lind, and maybe further to Othello.  I took Friday (June 15th - already a month has gone by) and Monday off from work, and also Tuesday in case I made it further, or needed more time to recuperate.

I only knew Pat through his blog, and we had never met in person, so I emailed Pat and told him I if I didn't call him, would see him in Tekoa Friday afternoon.  Of course, me being me, I didn't call and he probably didn't know for sure if I was going to show up.  During the week before, doubts started to creep in my mind - should I really go? I didn't feel too well, hadn't been biking a whole lot, and I didn't want to slow him and Eric down.

But I slapped myself and said - whaddya mean you might not go? You bought a trailer, a bivy sack, water purifier, tons of trail mix and beef jerky, and who knows what else for the trip. This is a great opportunity.  Get on your bike and ride!

So Friday I got up, got a haircut, mowed the yard, went to REI for a few last minute items (extra tubes and a bandana to keep my scalp safe from the sun's rays), and finished packing. I had packed clothes,  food and miscellaneous items in a backpack and placed it in the yellow Dry-Sak bag in the trailer, along with the bivy sack, rain gear, emergency tube tent, tarp.  And a bottle of Rye Whiskey from Woodinville I bought at Rosauers for buddy Trevor, who was going to give me a ride to Tekoa.


I couldn't decide if I needed a sleeping bag or just a blanket, but I'd read about condensation building up in the bivy sack so I rolled up a sleeping bag inside a blue sleeping pad and strapped them to the trailer.  This sleeping bag caused me a bit of grief both during and after the trip.  Turns out my wife had claimed it for herself, and didn't know I was taking it on the trip.

Also at the last minute, I emptied a half-gallon milk container and filled it up with water and placed it inside the Dry-Sak also.  It came in handy during a dry section of the trail.

Two regrets:
1) I didn't make some no-bake cookies before I left.  I think I could've just survived the whole trip on no-bakes - peanut butter, oatmeal, cocoa and sugar. Perfect food.
2) I didn't ride to the Waste to Energy plant and weigh the bike and trailer. Pat's bike and gear weighed 100 lbs., and sometimes I felt my set-up was close.

I hooked up the trailer to my Trek 29er mountain bike and rode forth from our house to the bottom of Sunset Hill and Government Way to meet up with Trevor by Big Red's Hot Dog stand.   To get a feel for riding the bike with the fully loaded trailer off road, I rode part of the way there on the dirt trail off the TJ Meenach Bridge.  I popped out by the college on Fort George Wright Way, then on to Gov't Way.

Enough talk, time for pictures. The view from Gov't Way. It was a good decision to ride. A perfect day: 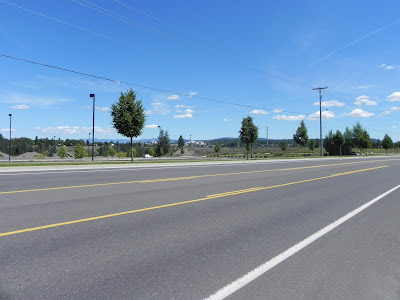 I met up with Pat and Eric at the Tekoa C&D Bar and Grill, and had a beer and a good fish n chips dinner there. Discovered I went to school in Ephrata with one of Pat's cousins. Small world.

We were soon on the trail and checking out the blocked off trestle over Tekoa.  I was immediately attacked by a horde of mosquitoes, but managed to get a few pictures taken after spraying myself down with bug repellant.  If I remember right, there is some funding in the pipeline for improvements on this section of the trail.

Heading back out on the trail, the scenery was beautiful and the weather gorgeous. 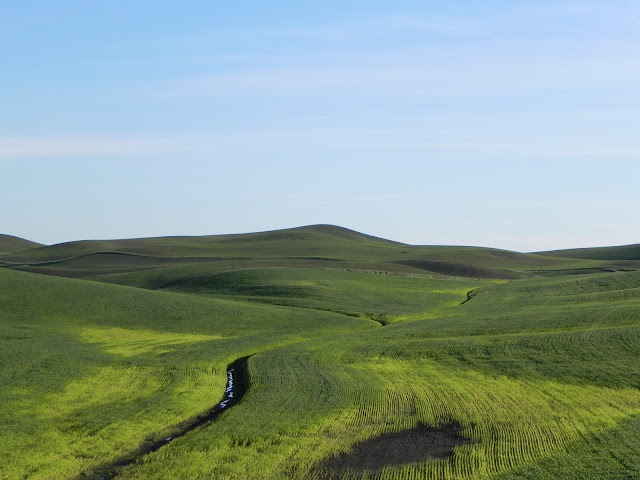 The plan was to ride out 5-10 miles from Tekoa and find a good camping spot for the night. We found one just past this trestle. 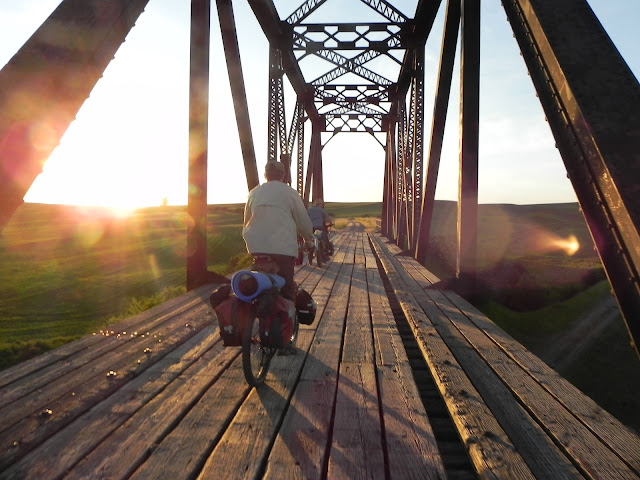 Below:  My camping set-up, Pat's is in the background. I tried not to think about any creepy crawlers that might want to crawl in and spend the night with me in the bivy sack.  I liked not having to set up a tent. Lying in the bivy sack, looking at the stars - reminded me of sleeping out in the backyard when we were kids, but with a lot more coyotes singing in the distance. 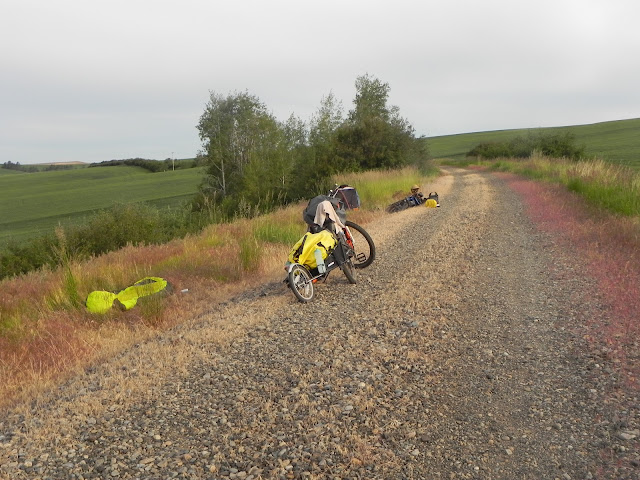 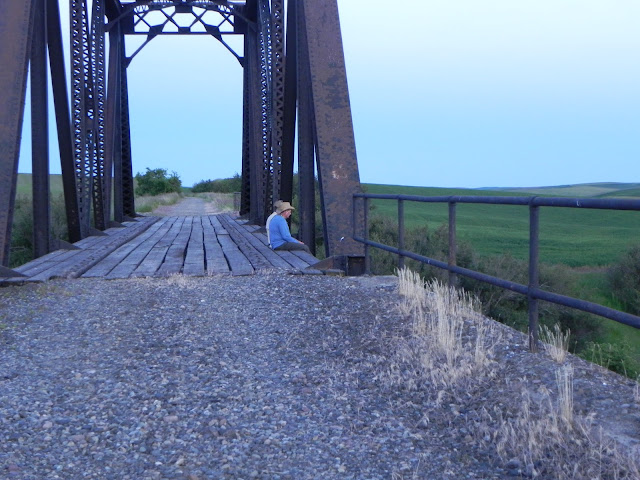 The next morning, Eric and I checked out the trestle from below: 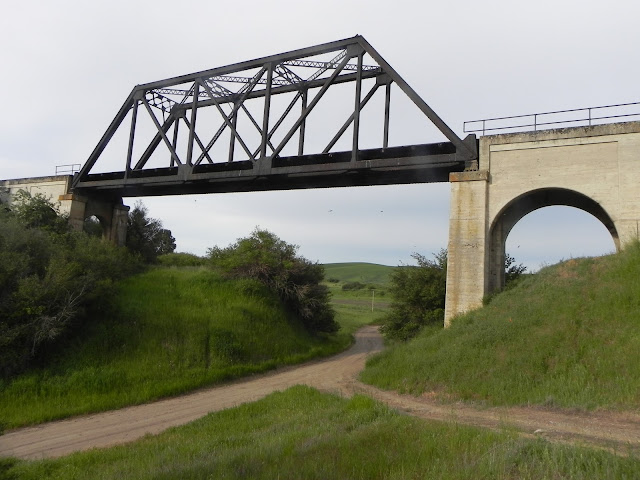 On the road again, next stop Rosalia. 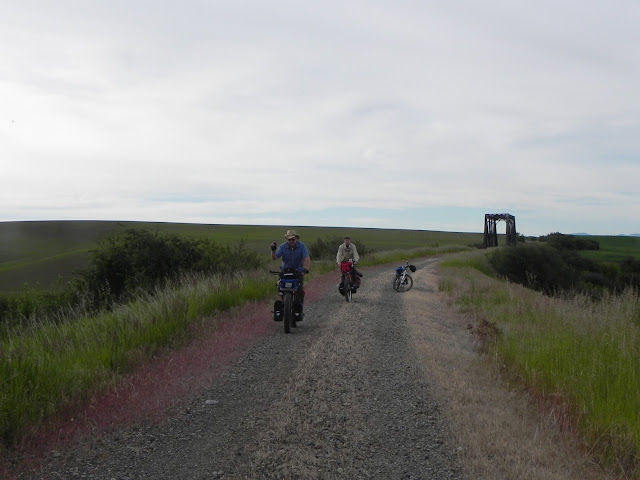 Things were rolling along fairly smoothly.  I was getting to know Eric and Pat, and our riding styles meshed.  I could feel a little drag from the trailer over the rockier stretches, but not much.

Just before we reached Rosalia,  I was riding in front and started to point out this sign before the bridge over the highway... 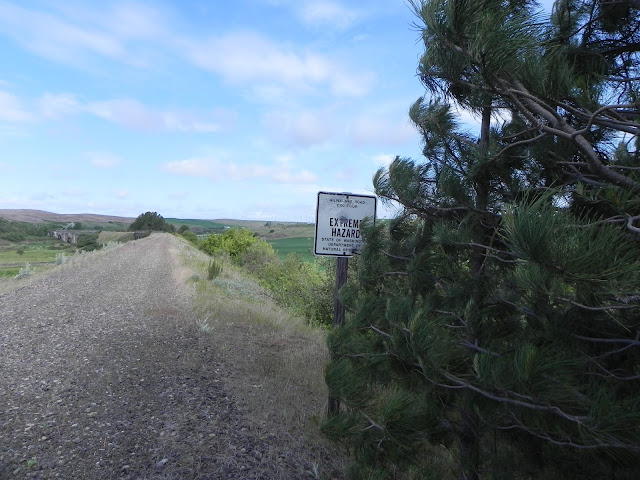 ...when Eric asked me "hey Scott, was your sleeping bag inside your yellow bag?" I swung my head around to look behind me and didn't see my sleeping bag rolled up in the blue pad on top the trailer where it was supposed to be.  It had fell out!  I had been riding in front for awhile, and it would've been noticed if it fell out then.  I thought back and realized that the last time I was riding behind the others, was way, way back there on the trail. Maybe 5-10 miles?

Damn! I thought about just leaving it on the trail and doing without it or maybe finding a blanket or bag in Rosalia, but I thought chances of that were slim.  I also thought I should probably return home with it.  It might be noticed if it was missing.

So I unhooked the trailer, and while Eric and Pat headed into town to enjoy a nice breakfast, I  rode back as fast as I could.  After about 20 minutes, I started wondering if it rolled off the side of the road and I had missed it.  But I soon came across it, right where it jumped off the trailer. 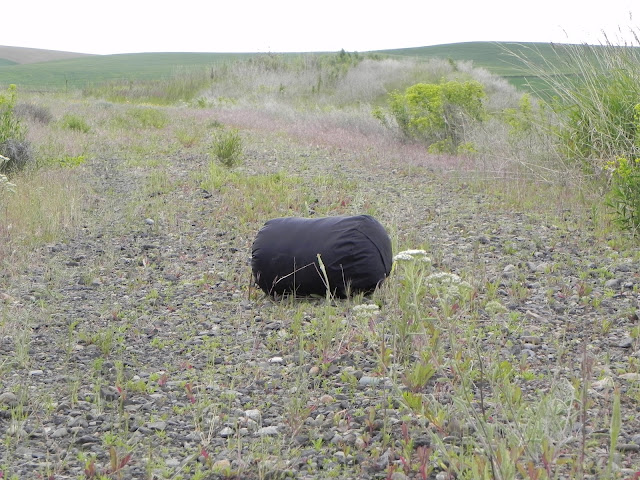 I tied it to my handlebars and headed back.  Of course, there was a headwind and slight uphill on the way back and it seemed to take forever.  I rode into town and didn't see any sign of the others.  I passed some (motor) bikers in front of one of the stores, and they gave me a funny look (could've been my imagination).  But just as I was going to turn and ask them if they'd seen two other pedal bikers, they revved up and took off out of town.  I called Pat, and the bikers reached him just as I called. Over the din of the unbaffled engines, I figured out they were back at the entrance to town. I had taken a different exit off the trail into town, and so I had missed them heading back to meet up with me.  Eric had ridden back to where I left the trailer to see if I'd made it there yet.

I stopped at the store in town and picked up a pre-made cheeseburger wrapped in foil for a $1.39 before heading back.  It tasted great!  I also picked up a couple more bottles of water.  The first rule of riding off road in eastern Washington late spring/early summer:  Can never have enough water.

I headed back down the road and found Pat and Eric waiting for me - too bad I didn't get a picture of Pat sitting in a camp chair reading a book, waiting.  Luckily, the plan was to stop for eats in Rosalia, so we didn't get delayed vey much by my little escapade.

Next: the ride from Rosalia to Rock Lake, and an epic detour to Ralston.