A couple weeks ago I rode out to the Trails Day with Riverside State Park & REI: Trail 100. I took Trail 100 from the TJ Meenach Bridge to the gathering spot below the Centennial Trail near the Military Cemetery.  It was one of the work parties organized by the Washington Trails Association.  See also Rich Landers' blog story.

We had a great turn out and representatives from Evergreen East, WTA, RSP and REI were there.  To keep us going, we were promised hot dogs afterwards, and also beer from River City Brewing. 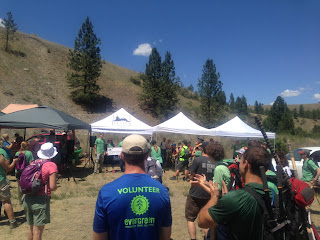 The plan was to widen a portion of the trail and after we were done it would officially become a multi-use trail, and it'd be open to bikes from  TJ Meenach Bridge to the Bowl and Pitcher. You could ride from downtown or wherever and make it to the Bowl & Pitcher area.

Apparently, the section from the Military Cemetery previously wasn't open to bikes, although there were no signs from this end prohibiting them.  Who knew?  I'd ridden this section before and knew once I got to trail 25 I was in the equestrian section, but looking at my RSP Map, well by golly, Trail 100 does head into the horse area shortly after the Cemetery where it forks off down towards the river.  So basically the deal was we help rehabilitate this section to the horse area, and then bicyclists would get to ride to the Bowl & Pitcher unhindered.

We broke up into groups, and I fell in with a group led by um I forget his name, we'll call him Jake…Jake from Evergreen East.  A good guy willing to teach and help newly trail makers.

The plan was to widen the narrow trail out to 3 or 4 feet on the steep hillside.  This is where it gets interesting.  Of course, there's all sorts of theories and philosophies on trail making, and we had a few differing ones amongst the workers.  The mountain bikers were going we don't have to go too wide, and I was mostly with them, but the ranger came by, and said don't be afraid too go wide, this will be used by horses and bikers.  Well, I thought that makes sense (I'm easily swayed) and it appeared we were only widening the section of the trail on the hillside and the rest would be left as is. After all, this was a pretty narrow trail which made it difficult to stay upright in spots without tumbling down the hill. But the mountain bikers (I've got a foot or two in that camp), still didn't want to go too wide. [er sorry bout the different fonts, copy/paste blogger troubles] 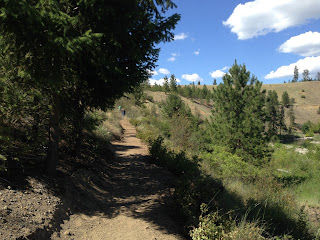 Then there we're those who wanted to take out rocks.  There was one in our section, and I didn't think it was doing any harm.  But soon shovel and tools were flying and the rock was gone, tumbling down the ridge.  One of the runners in our group said how it's annoying when you're on the way back to trip over the rocks because your legs are tired.

After a few hours of work, I headed back towards camp and helped out in spots where I could. 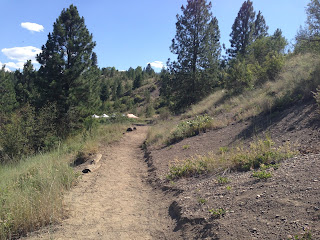 Yesterday, because it was the hottest day of the year and I was sick of being stuck in the house, I biked out to try the new trail.  I rode again to TJ Meenach and picked up Trail 100 there. 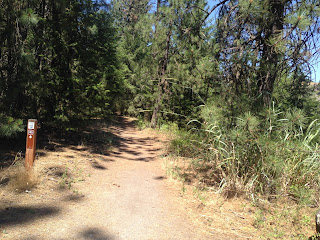 It's just a short 10-15 minute ride to the section we worked on, where a new sign is up announcing this is multi-use.  They'd mentioned some temporary signs would be put up and permanent ones were on order; not sure which this one is. 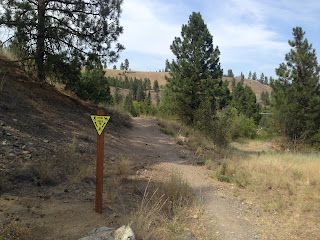 Rock lovers will be happy to know that I found plenty rocks/boulders left in the trail.  Sorry, did not stop to take pics.

Below is the end of the section we worked on, with Trail 100 forking off to the right. 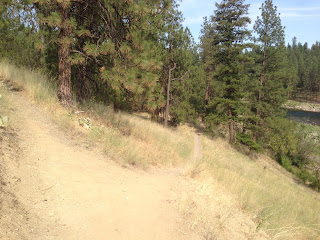 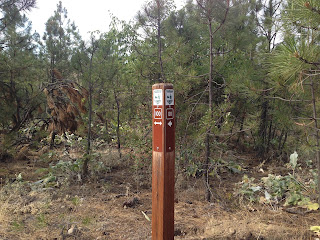 The first of new signs showing bikers where/what trails they're allowed on.  This was to the left of Trail 100. 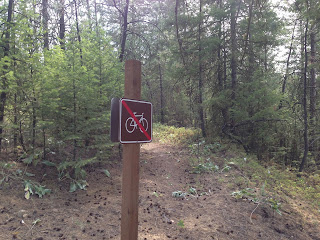 The other side of the sign warning horse-people that other users will be on this trail. Speaking of, there was some fresh evidence of horses in the area - one of the hazards of biking in Riverside.  Just another way to practice your maneuverability. 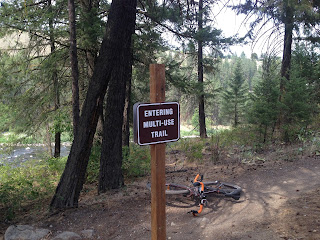 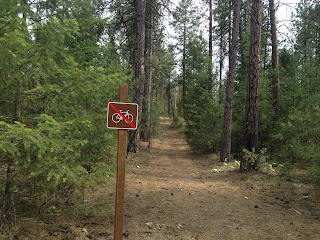 I got to what looked to be the end of Trail 100 where Trail 25 comes down from the left. 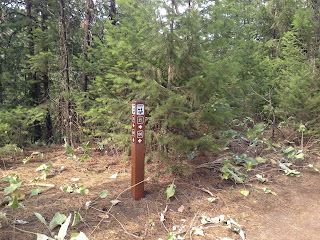 One of the questions I had before setting out, was how does Trail 100 get to the Bowl & Pitcher area - does it veer off from Trail 25 or what?  I couldn't tell from my map.  The only thing I could figure was to continue on 25.  I crossed my fingers and kept going.

And sure enough, after traversing that real rocky section, I got to the Bowl and Pitcher.  I turned around and where there used to be sign banning bikes, was a new sign. The sign of a multi-use trail, bikes included: 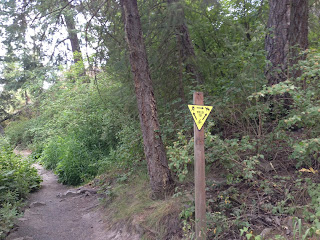 here's my garmin of the trail from the Bridge to the B&P. Just a little over 4 miles, 36 minutes of slow heat-exhaustion moving time.