Up the Big Muddy Q

Oh yeah, at the bottom of Quilomene Canyon, finishing up some shrimp and cocktail sauce.

We set up camp and had some eats.  I checked the expiration date on my tuna salad and crackers that were left over from bike camping last year and whoa it said Mar2015! Just made it.

Not good.  I recommend eating them in the year bought.

We were getting ready to ride out to the river, and Randy or Ward spotted a car coming down the extremely rough dirt road.  A Subaru wagon!  We were impressed with anybody driving a Subaru down there.  We talked to the two guys who got out of it, but weren't sure what they were up to.  They seemed out of place, but were familiar with the area.  We had a few theories.  Gov't agents. Birders. UFO searchers.

We rode out to Quilomene Bay. The water is still low from last year's drawdown due to the crack in Wanapum Dam, and we kinda sorta skirted around over or near the warning signs to stay above the drawdown area. 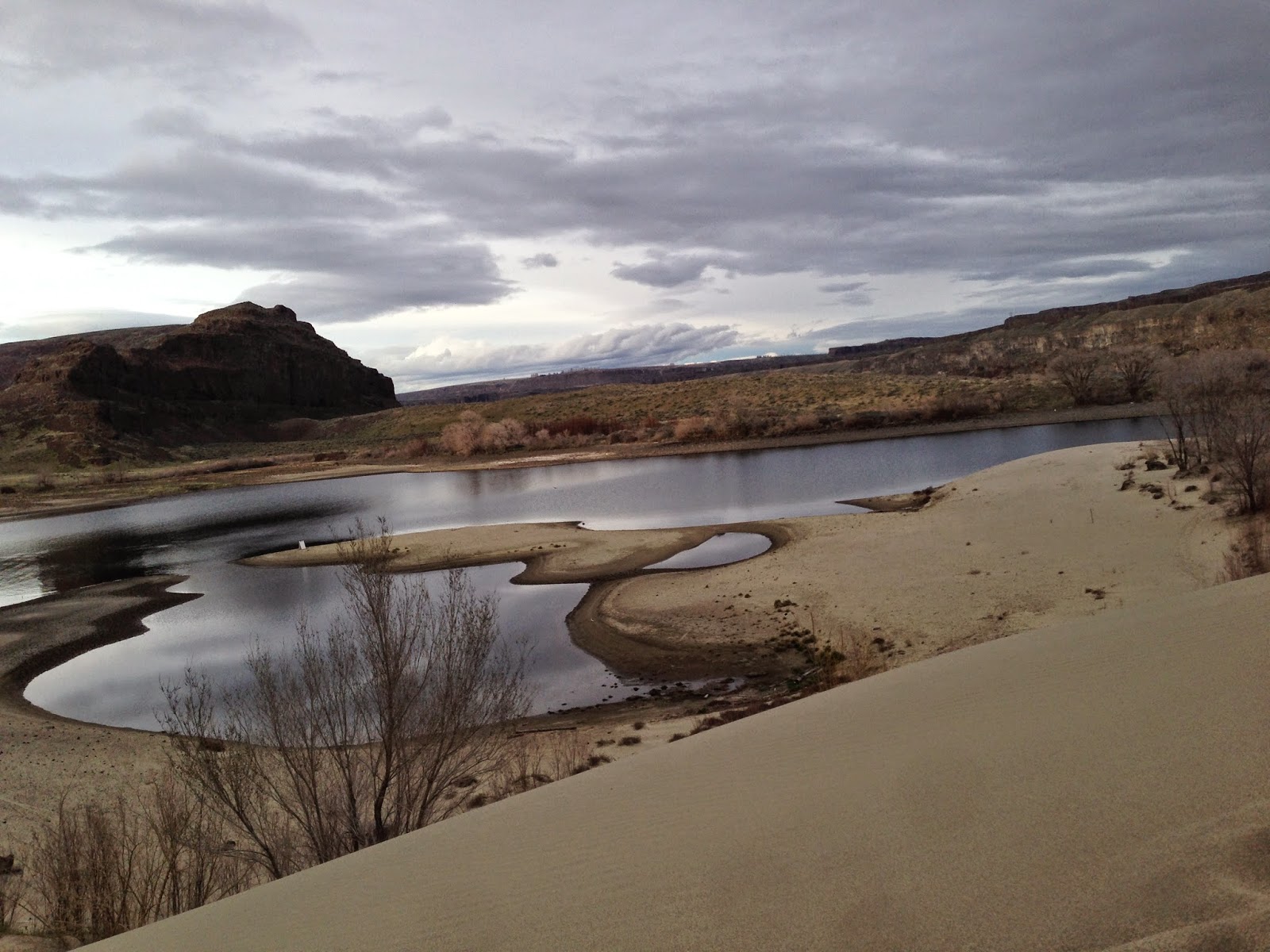 We ditched our bikes behind a dune, and climbed up it.  We were directly across from the Gorge Amphitheater.  For years, we've gone to Dave Matthews Band and other shows there, and looked out at all the boats on the Columbia partying (I suppose) during show time, and wondered just where is this spot?  And how do you get there?  And now I know.  Well, I guess most people get there by boat.


This dune was tempting - would be fun to ride the bikes down.  There are motorbike tracks down at the bottom so there had been some yahoos out there, but we wisely decided not to ride it. A sheriff's boat boat appeared and scoped us out, went into the bay where they could see our bikes behind the dune, and eventually left. 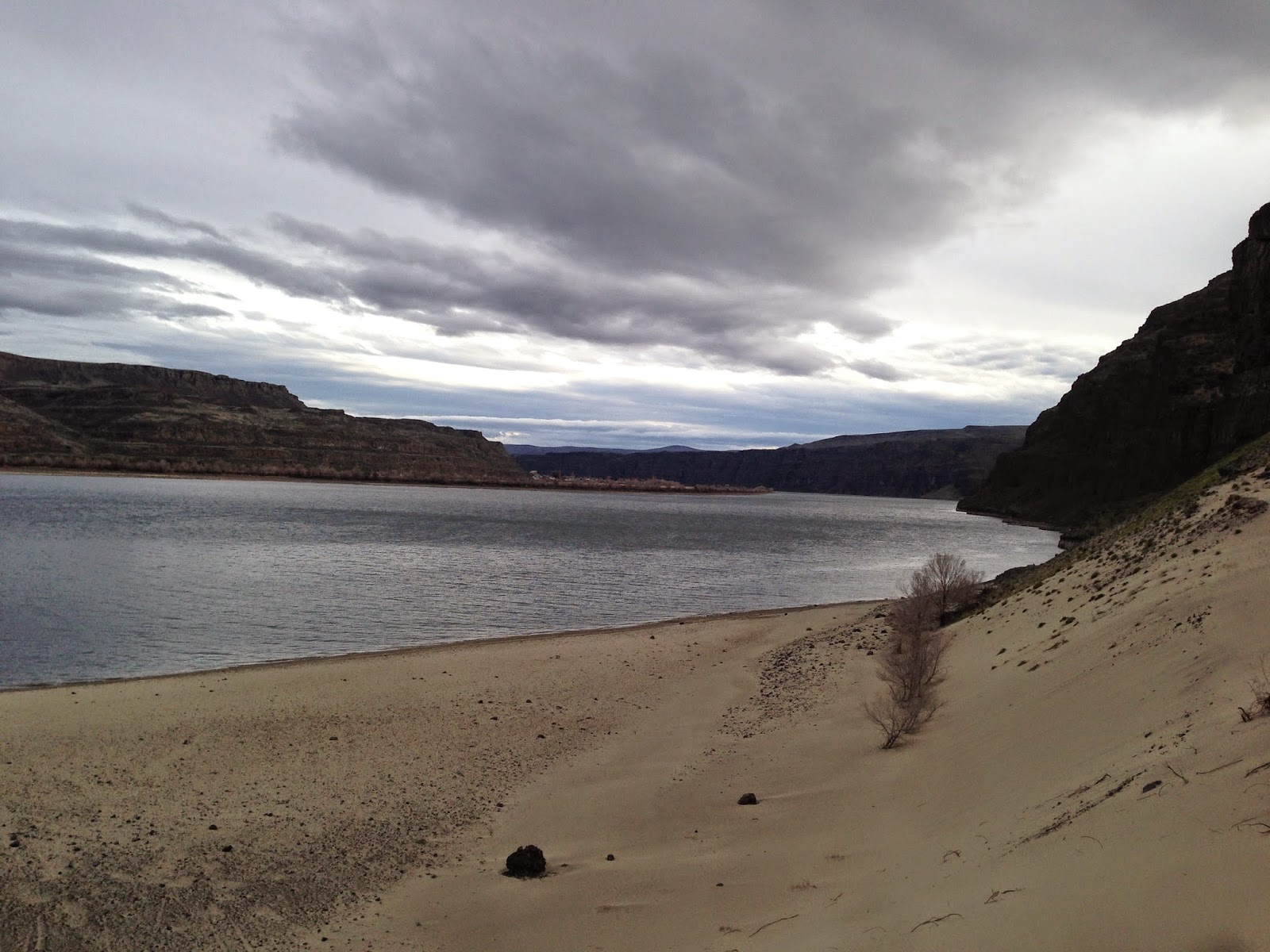 We came back to camp and the Subaru was still there, which gave us a bit of an uneasy feeling as it was getting dark.  Eventually they came back, and Ward talked to them for a bit. Turned out they were Turkey hunters, scoping out the canyon for the upcoming season in April.  Did not envy them their drive back up in the dark.

Trying to make this short, but not succeeding.  Fast forward to 2 or 3am.  It's starting to rain.  Luckily, I had most of my stuff under the rain fly, but my garmin and frame bag were still on the bike.  I left them there, too lazy to get not out of my warm sleeping bag.

Morning.  It's wet, still raining off and on. We decide to forgo Ward's famous grilled cheese sandwiches and kielbasa and get the heck out of there as we were looking at 4-5 hours of climbing back up to the 3,000+ level.  We were also concerned once we made it back to the trucks, we might not be able to get safely out on Parke Creek Road without tow truck assistance.

We didn't get far before my back tire went flat again.  Turned out to be a valve core malfunction, and only had to swap out the valve core instead of changing the tube or fixing a flat.  (shoot - hope Pat doesn't need that core, meant to drop off my extra).  I crossed my fingers and we rode on.

After a bit the rain started falling more and we donned rain jackets.  I fell behind, but wasn't too concerned at first.  I don't have good legs for climbing, my front tire kept bouncing back and forth off the rocks.  This took more energy to stay upright, but I didn't want to stop and lower pressure in the front.  There was a certain speed had to keep going to keep upright but once the tire bounced too much I'd lose momentum and stop completely.  Think I might be carrying too much wait up too high, which didn't help the handling.

It became a real slog.  The tires and drive train got covered in mud (see Pat's pic), I couldn't get traction on or off the bike because I was wearing 5-10 flat bottomed shoes - good for gripping pedals, but not slippery muddy trail.  At least they are waterproof!

A few thoughts kept running through my mind:

- Glad I didn't bring my Fargo and BoB trailer.  The trailer would've had to be left behind.
- Why didn't I buy those waterproof ankle high hiking shoes I was looking at the day before the trip?
- When does hypothermia set in? I had gotten wet before I donned my rain jacket, my pants were covered in mud splatter.
- Maybe I should've signed up for the MedStar air ambulance service before the trip.
- A Spot satellite beacon is a good idea, too. And an extra battery pack for the phone.
- I can walk out with or without my bike if I have to.

At one point I finally pulled my phone out of my pocket. It had 10% battery charge left. The temp was below 40F, I was soaked.

Now I was a wee bit concerned if I had a problem - mechanical or physical - I'd be in a tough spot.

Sometimes I'd get momentum, only to have my crank and chain seize up from the mud, and come to a slippery sudden stop. In a particularly bad spot where I couldn't get traction on or off the bike, I tried pushing the bike off the side of the road in the grass and weeds.  I only picked up more crap, weeds and mud in the tires which made it harder to push. I still couldn't get any good footing.

Then out of the mist ahead a figure in yellow rain jacket appeared on foot.  It was Pat, ever the gentleman, coming back to check on me.  He figured it wasn't good the group had separated in these conditions. Ward was up ahead, and Randy was ahead of Pat.  He offered to push my bike for me and I said no it's ok, went a few more feet and said oh ok!

We got to his bike, had a bite to eat, and continued the slog on and off the bike.

My one pic of the day, and this isn't even the steepest or muddiest, dreariest part of the climb. 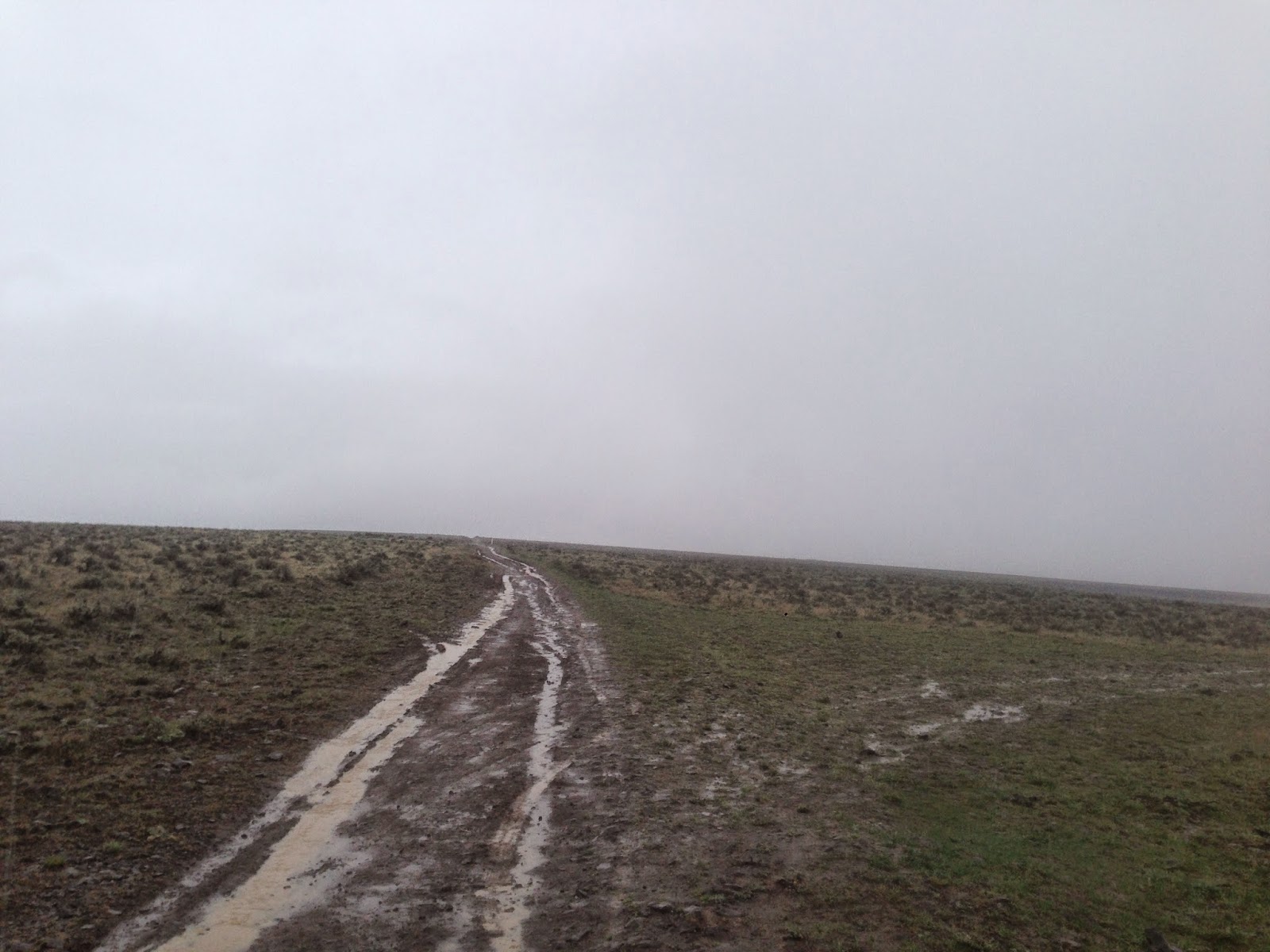 Eventually, we made it to the top and met Randy and Ward under some trees.  Ward had some food laid out, crackers and cheese, sausage, good stuff, and we rested a bit.  Got chilled, and got on the bikes for the last mostly downhill leg to the trucks. At this point, the worst part was knowing the worst part was behind us, but knowing that we might get to our trucks and end up getting stuck and having to get back on our bikes which would then be the worst part.  Luckily, the trucks made it out on Parke Creeke Rd without getting mired down. A few hairy moments, but eventually we breathed a sigh of relief when we made it to a gravelled section.  Woo hoo no more mud!

Here's the Garmin of the ride/walk up Quilomene.  I thought we took a completely different road up than down, but it looks like we started out different and then connected with the same Army Rd we took down. I'm a little confused.

Flat Tire Postscript:  I washed the mud off the bike a couple days later.  The back tire had plenty of air in it.  Then last weekend I pulled the bike out and gave the chain and gears a good scrubbing.  The tire was completely flat.  Pumped some air in it and it wouldn't hold any air at all, lost it about as fast as I could pump it in.  Finally took the bike in the back yard today to fix the flat.  Found this with the thorn end completely stuck in the tire: 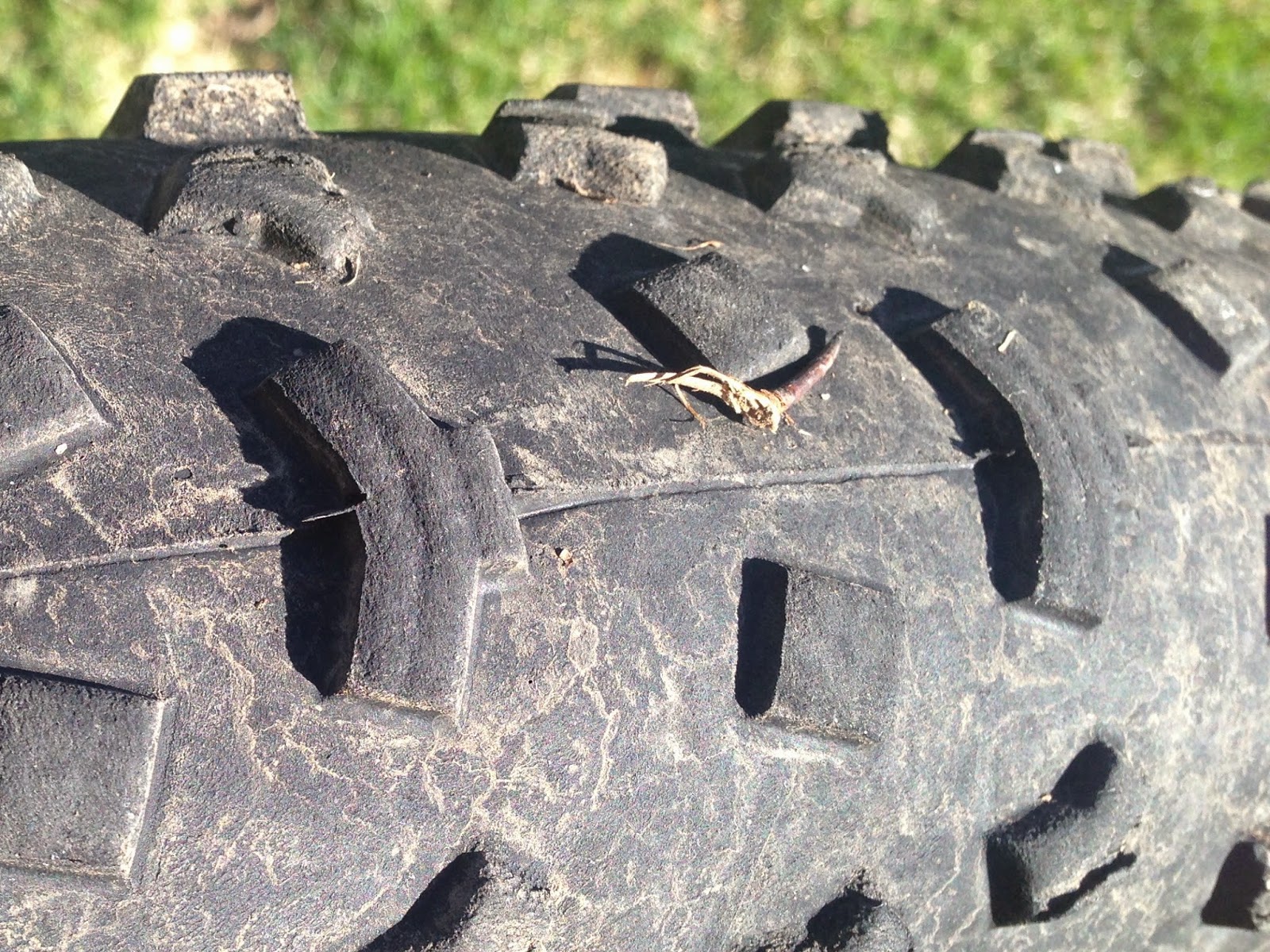 It's odd if I picked this up at Quilomene that the tire held air for so long.  I don't think I picked it up at home somewhere between the front and backyard. Maybe it was stuck in the tire just right.  I managed to get the tire off and back on in the comfort of my backyard, carefully checking for any other thorns. Sure glad I didn't have to fix it in the rain and mud.