Well, Easter weekend was the Quilomene/Whiskey Dick trip, but a couple things conspired to make me rethink heading out: Easter Brunch in the Ephrata homestead, should probably go; and not sure if I can keep up with the others for 4 days.  And a few other things going on.  Thought about going along for two nights, or a solo two-nighter, but in the end I did a day trip on Friday to do some exploring for a future overnighter.  Brought along a sleeping bag in case I wanted to stay overnight.

Ward and Randy helped me with spots to park: Rocky Coulee boat launch just outside of Vantage; off Parke Creek like last time; up Beacon ridge Road past the North Gate of the Wind Farm; or the entrance to Whiskey Dick area off Vantage Hwy/Whiskey Dick Rd (~milepost 18).  There's also another entrance off Vantage Hwy around milepost 20 at Pumphouse Road.

Originally, I had a vague idea of heading up to Whiskey Dick Creek Rd from the main entrance off Vantage Hwy, but instead I headed over to Rocky Coulee and parked off the side of the road above the boat launch where two dirt roads branch off, one heading north, the other west. It's easier to show: down in the right hand corner in the Gingko Petrified Forest State Park, where the road with the hash marks heads north, and another heads west. 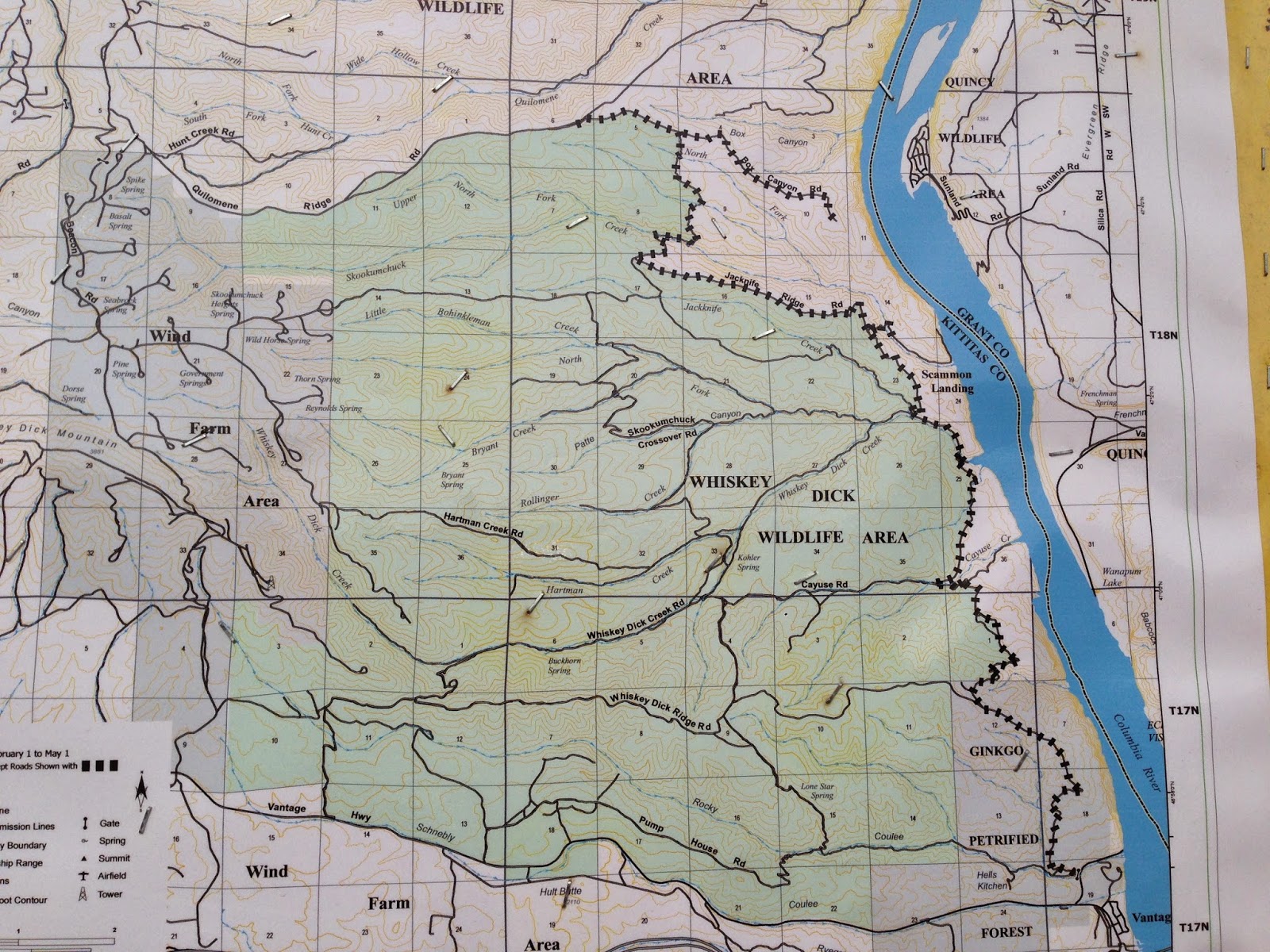 The road heading west was a bit overgrown and rough, and the road north was clear of brush but steep and rocky. I took it, thinking I could still connect with Whiskey Dick Creek Rd.  I didn't have the above map with me yet - it's a pic from a sign that came later - and was relying on google and memory.

Shoot - if you don't want to read all of this, I'll just give you the link to the garmin track now.

Maybe after a half hour of slow going, some walking, I got to the 1,400 foot elevation. This is guessing on my part.  I took a breather, and looked around. 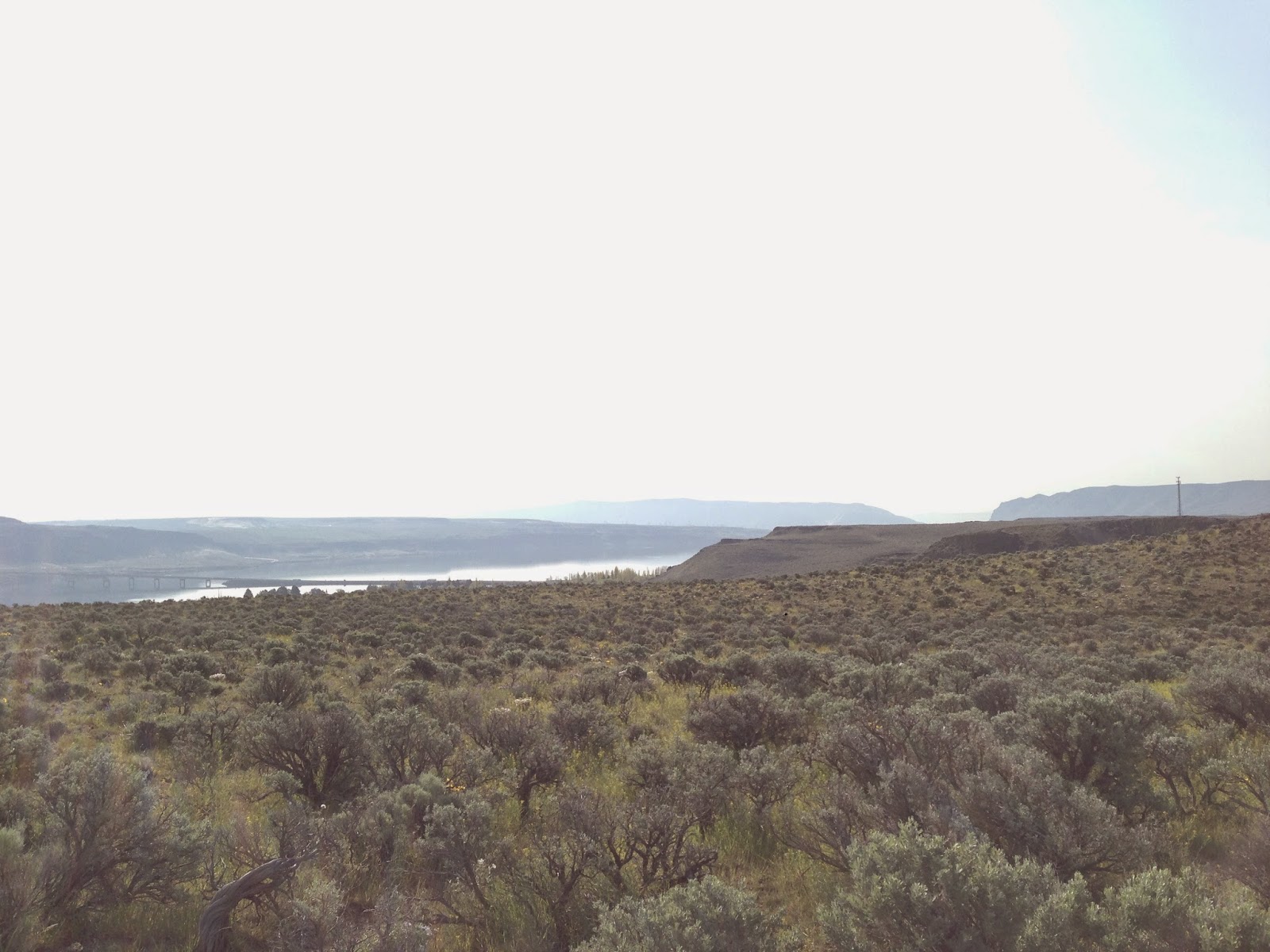 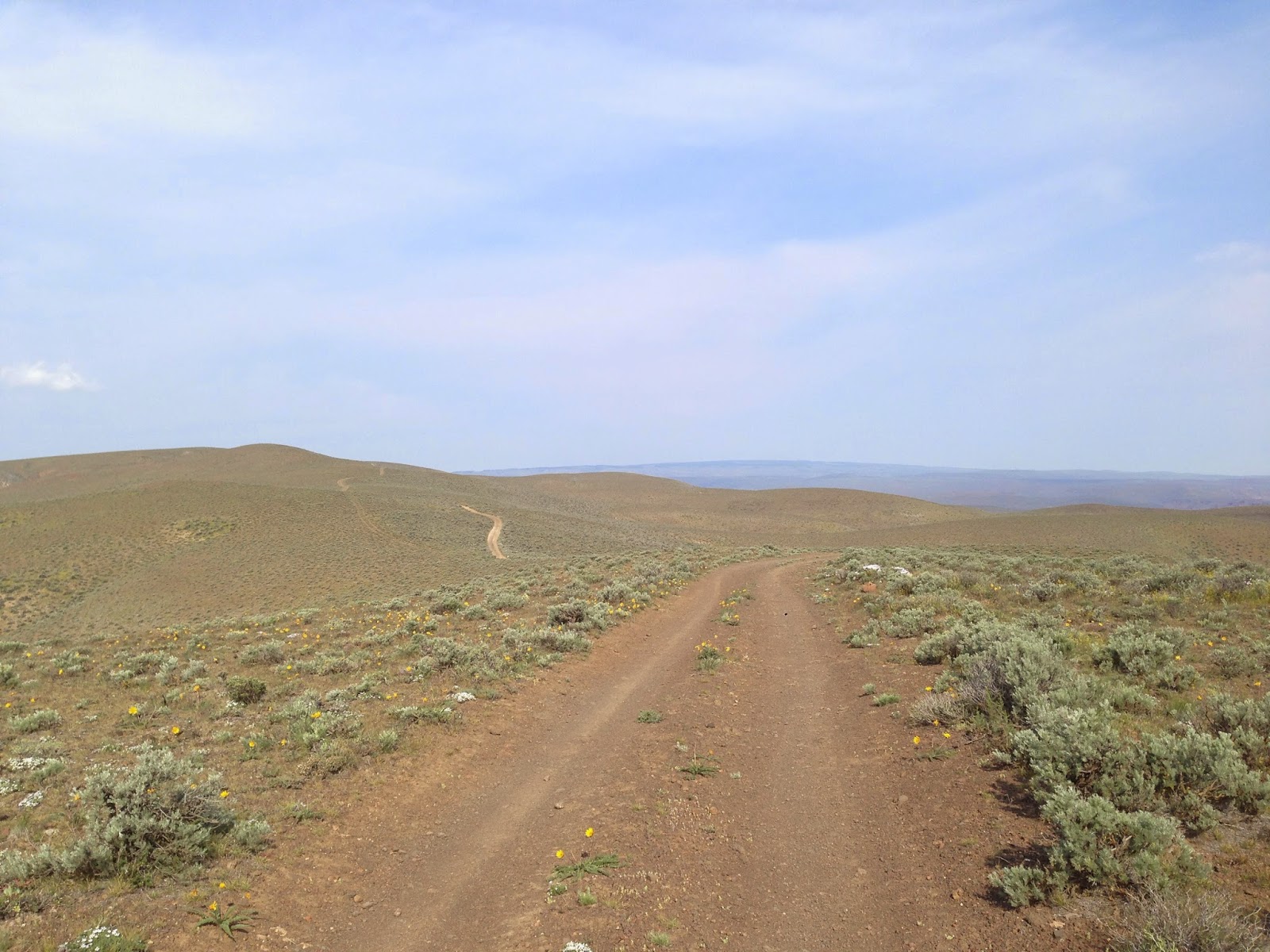 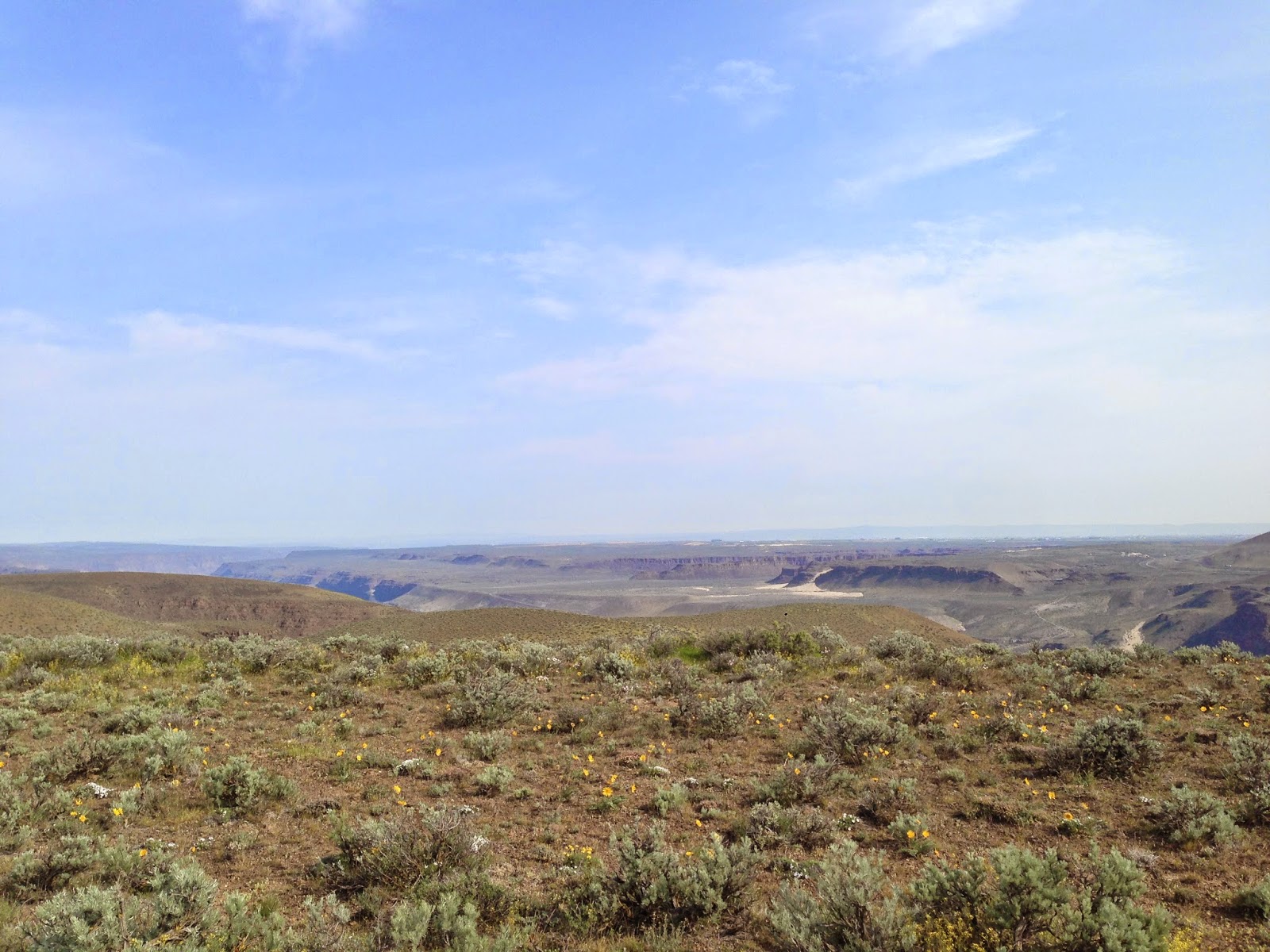 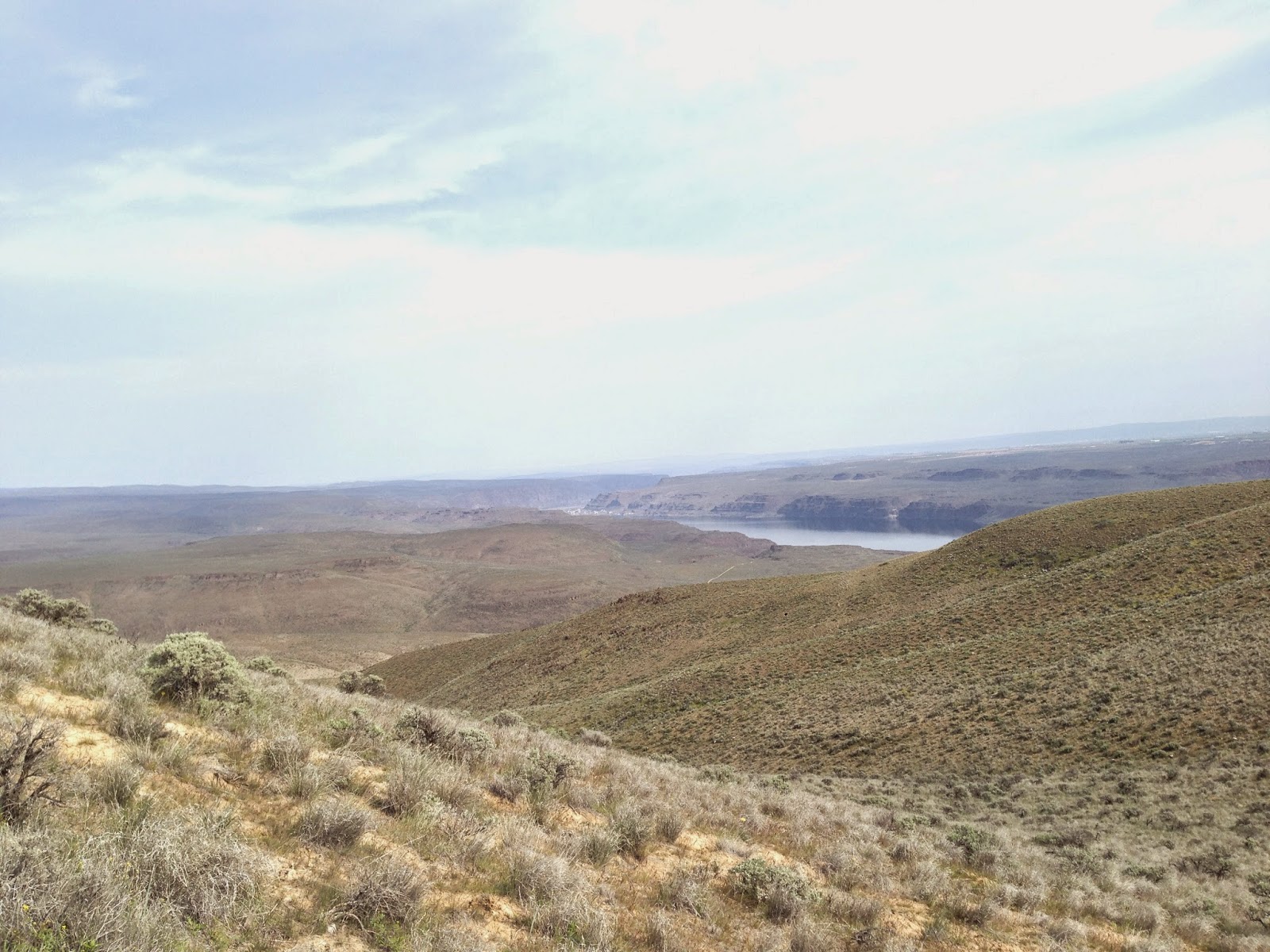 About an hour in, I came to a fork in the road where there were some remnants of a ranch or corral.  I went left, but that way turned out to just be a little spur off the main road - you can see this in the map above in the top of the square that the word "Gingko" is in. 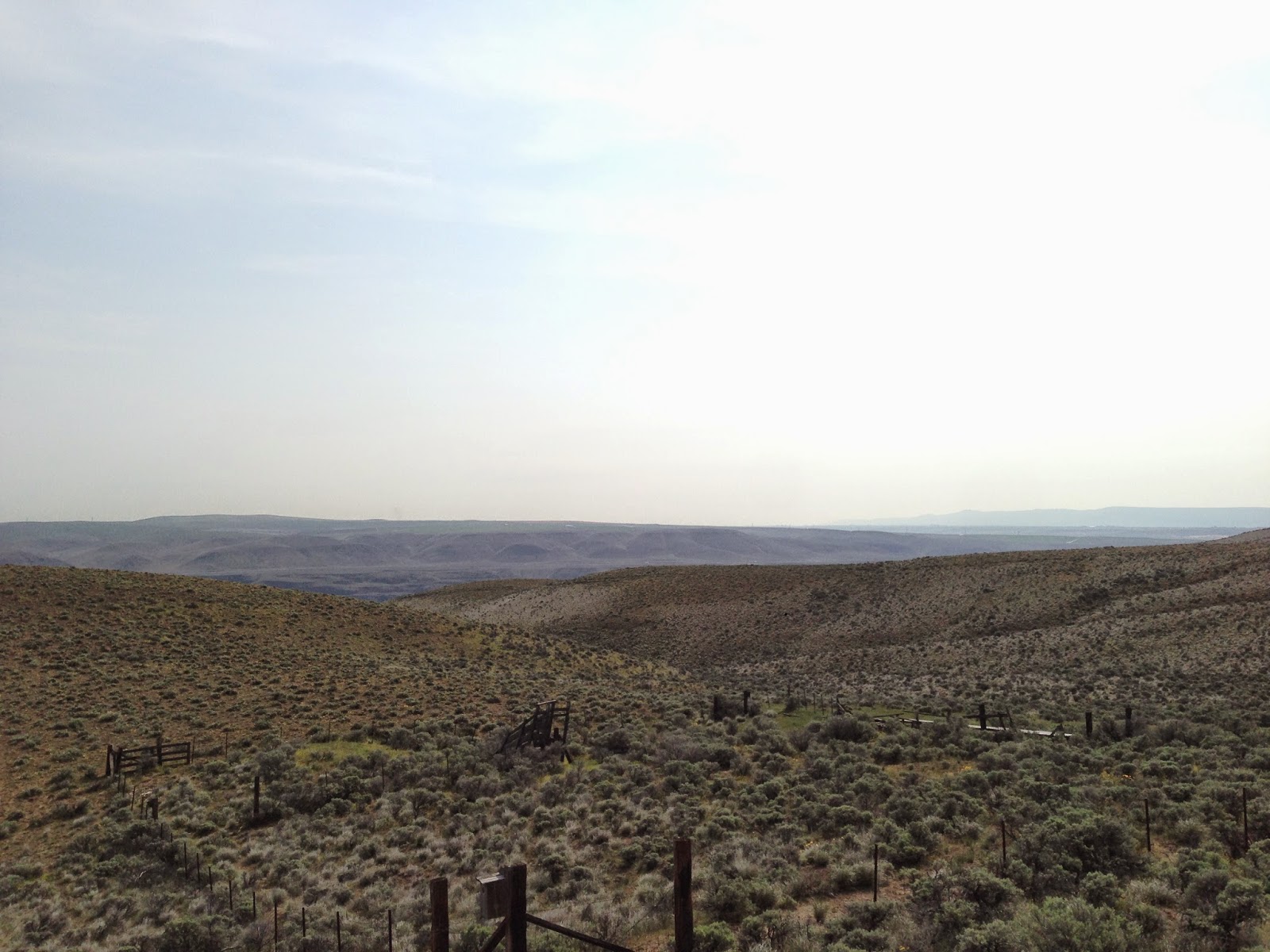 I turned around and continued on and soon came to the Whiskey Dick Unit welcome board where I snapped the picture of the the map.  I have a general idea where this is, unfortunately the map didn't come with a "you are here" marker. 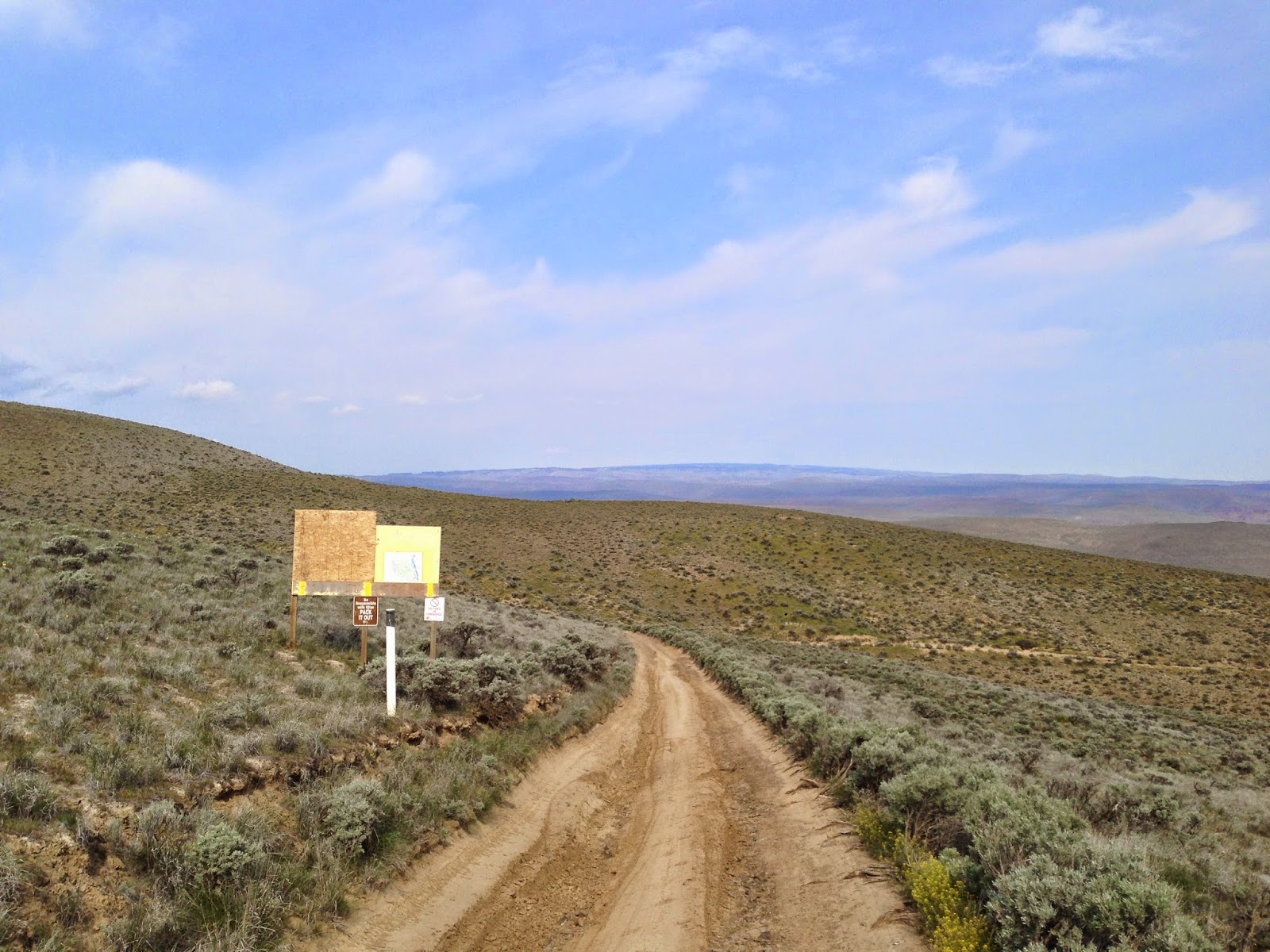 By this time you can tell the road is heading downhill.  I had wanted to turn left at some point and not go down towards the river yet, but I had missed that turn. So I kept on going, telling myself oh yeah it's not too steep to ride back up.

Anyway, it was fun to go downhill, but with that nagging feeling - gotta go back up.

Cayuse Creek, or Spring Cayuse Creek as it's labelled on google, looking west.  This leads up to Whiskey Dick Creek Rd. 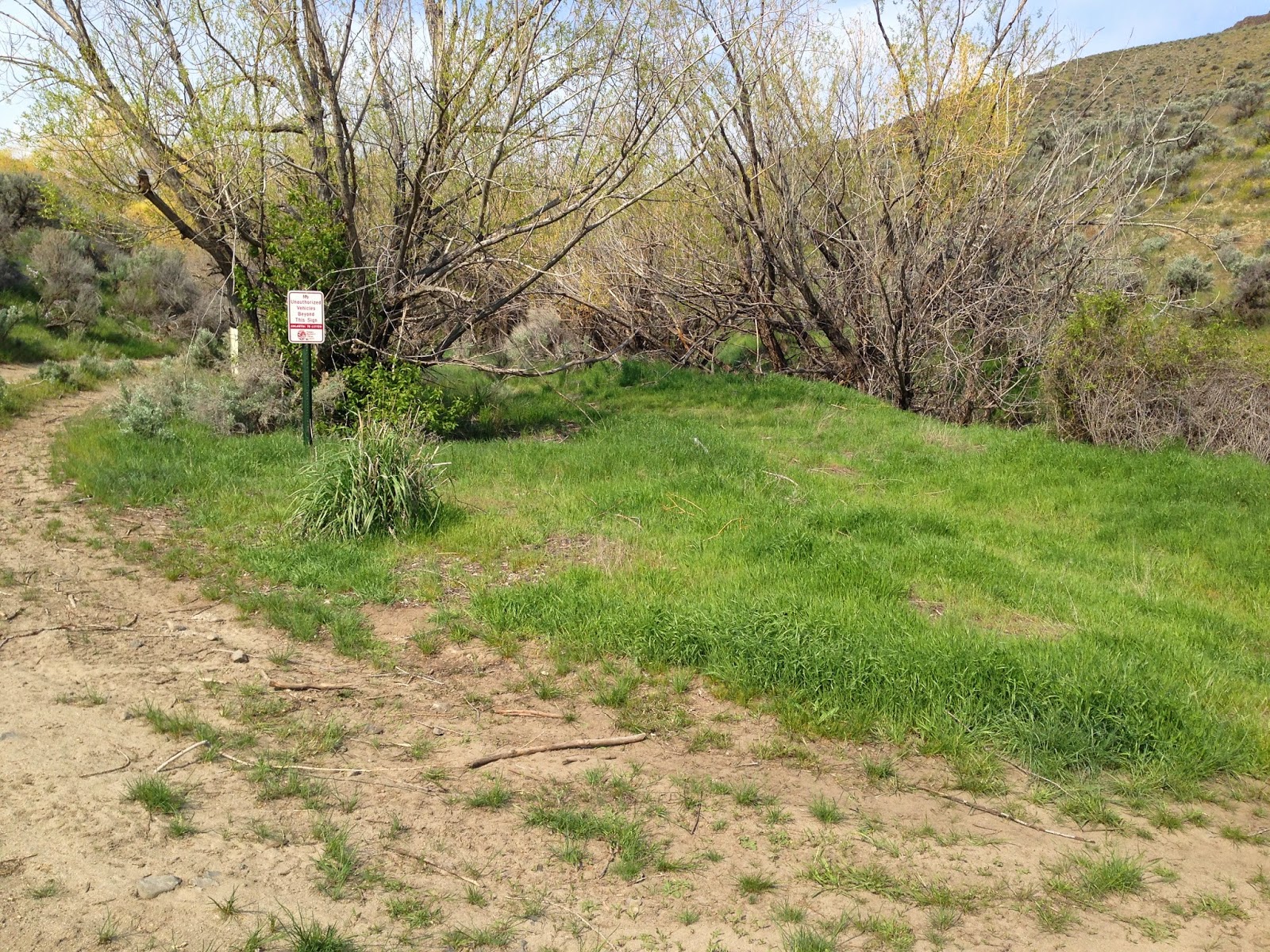 Looking east at Cayuse Creek - I thought this was a little lean-to for shelter, but inside were two barrels, like the type you use for burning.  Think there were some berry plants growing in the area. 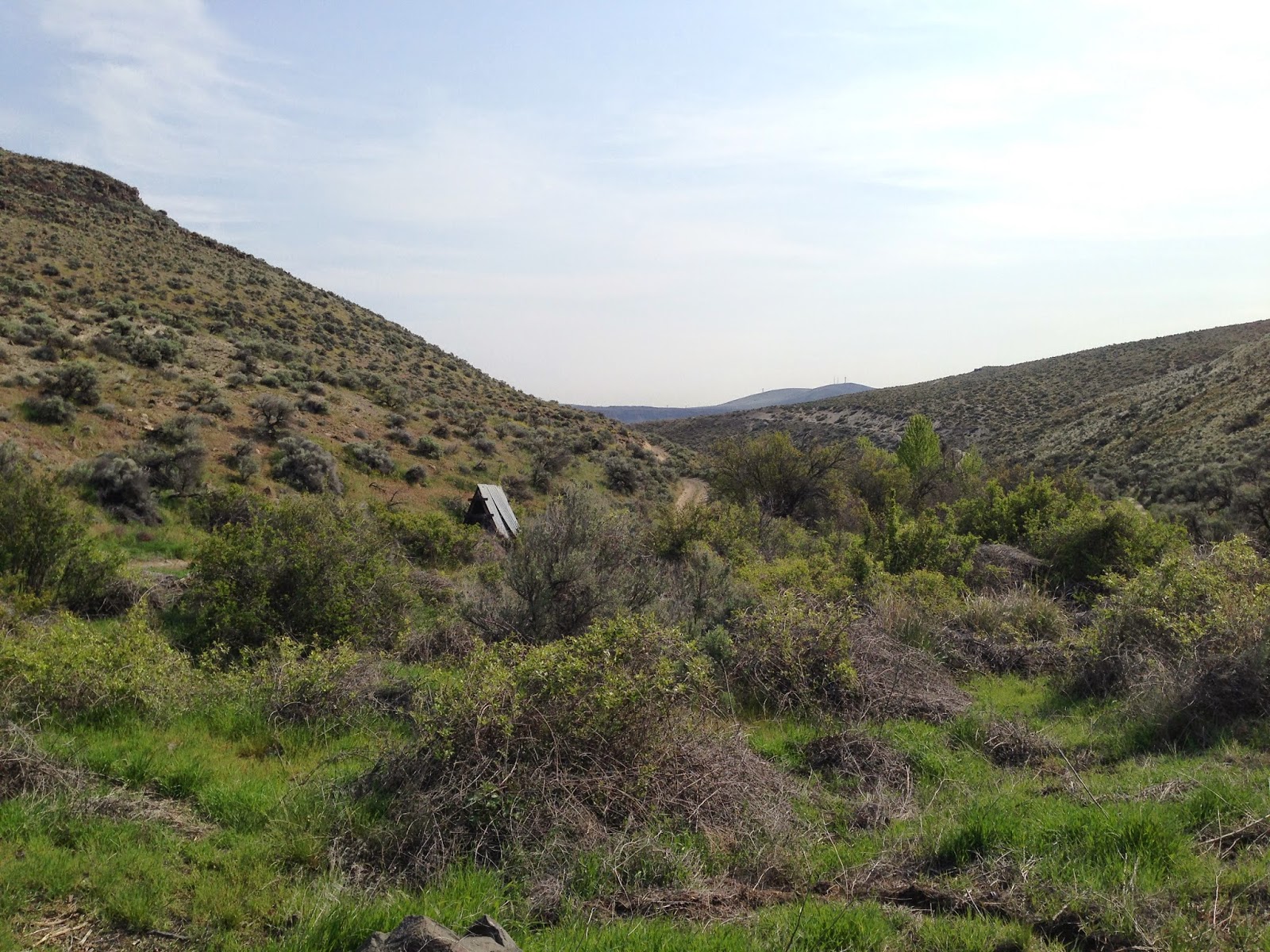 Before I knew it, I was almost down to river level.  Saw some guys down at the river, and thought for a second I came across the other guys, but knew they should be at Quilomene on Friday.  Turned out these guys arrived by boat, and they motored off. (Edit to add: I wasn't sure where the beer was stashed in the Whiskey Dick area, so I was hoping they didn't make off with it.) 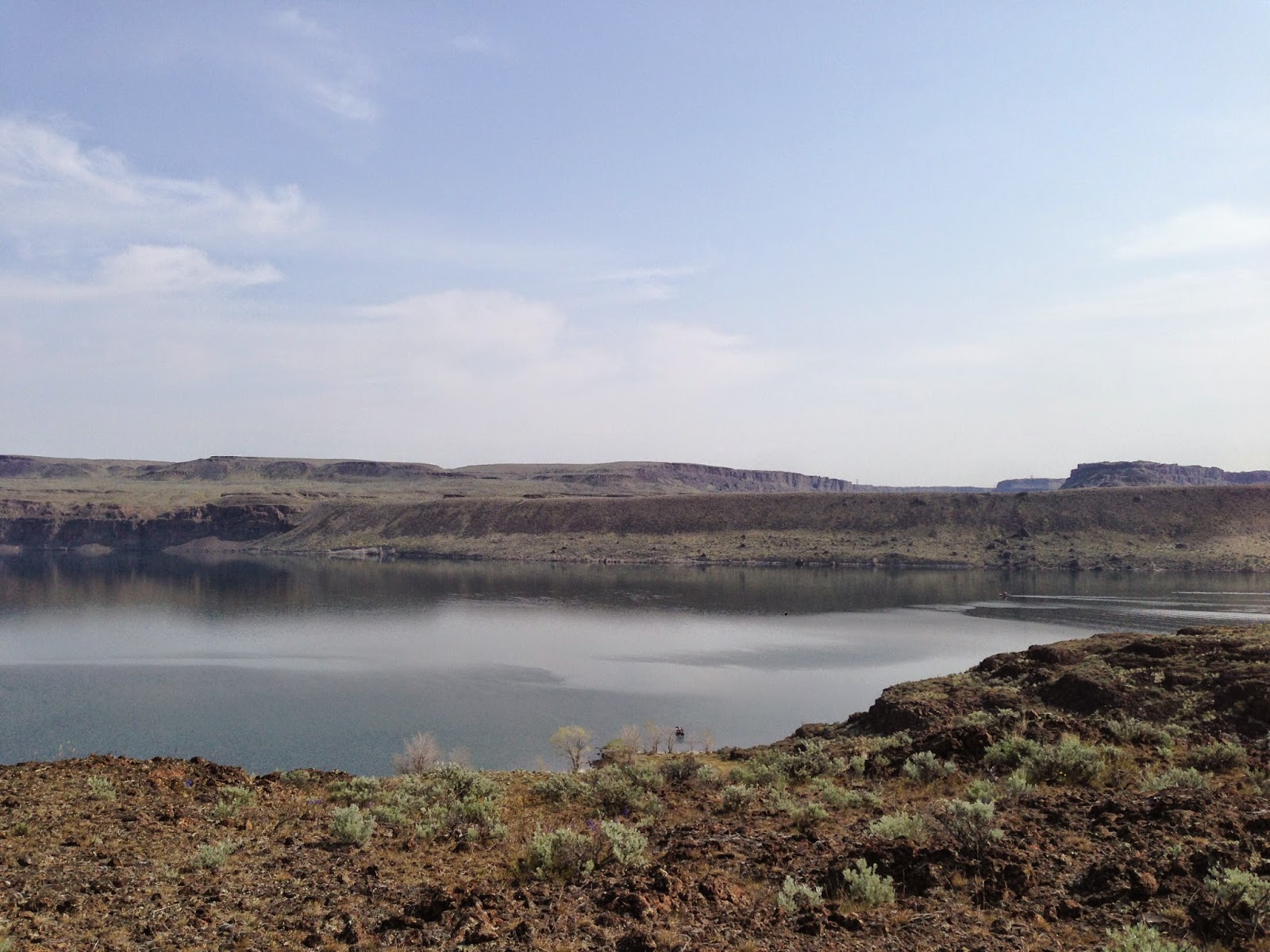 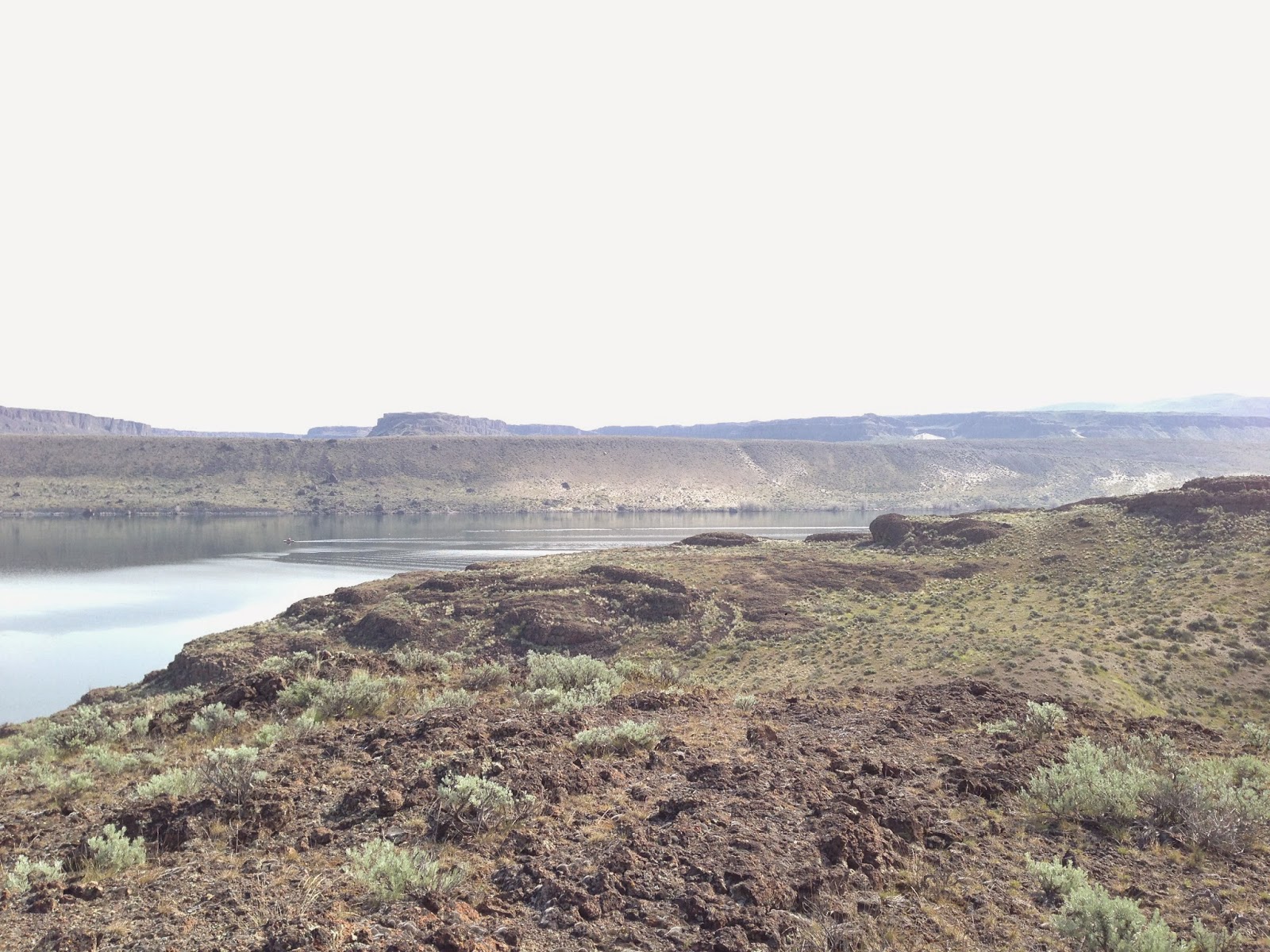 Just after this, I rode through some water on the trail and the garmin map said - Whiskey Dick Creek. Made it a lot quicker than I thought, only took a couple hours.  That was part of the purpose of this trip, to see how long it took to get places.

I kept going and after a bit the garmin noted I was across from a spot down at the river called Scammon Landing. 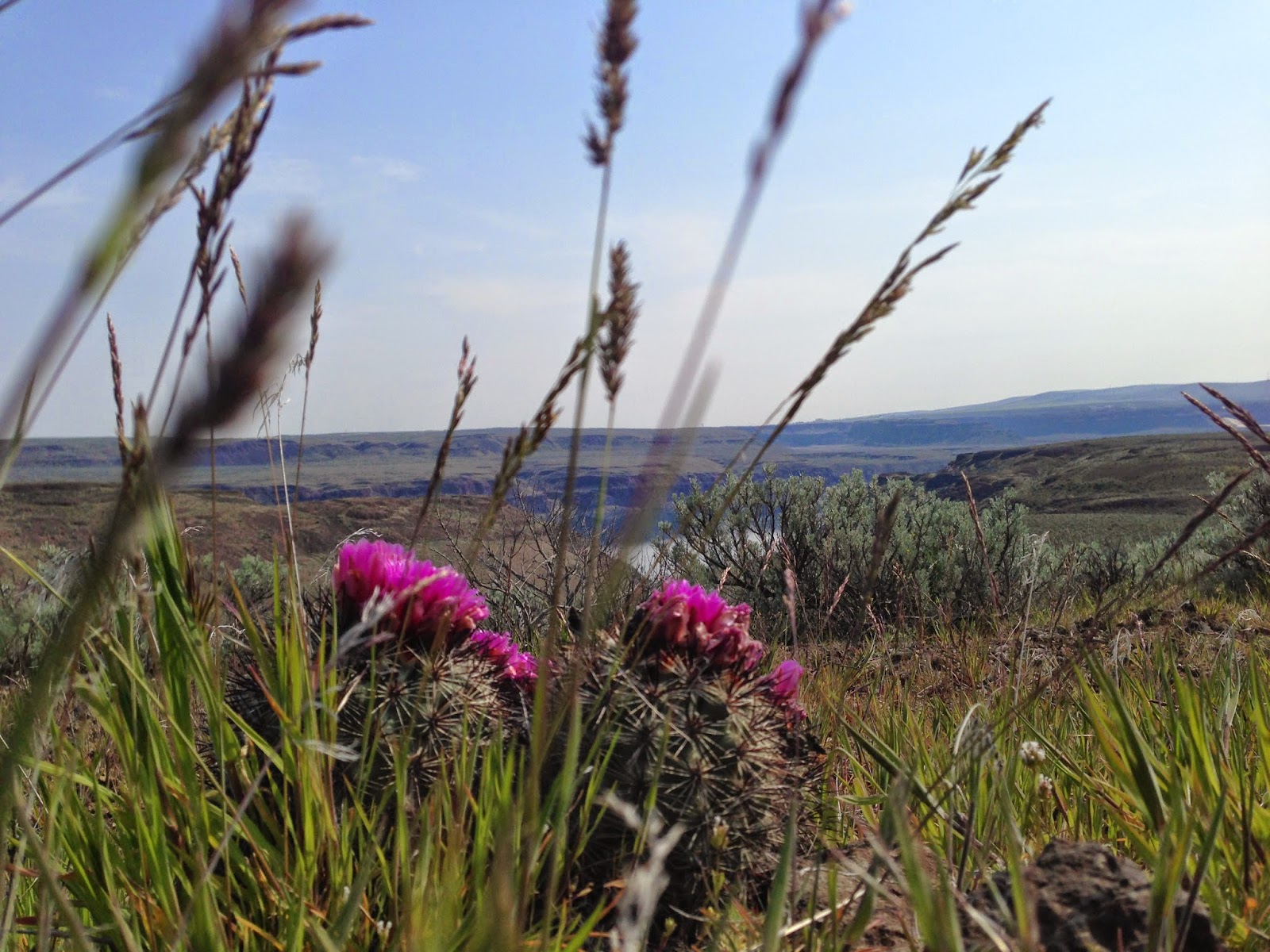 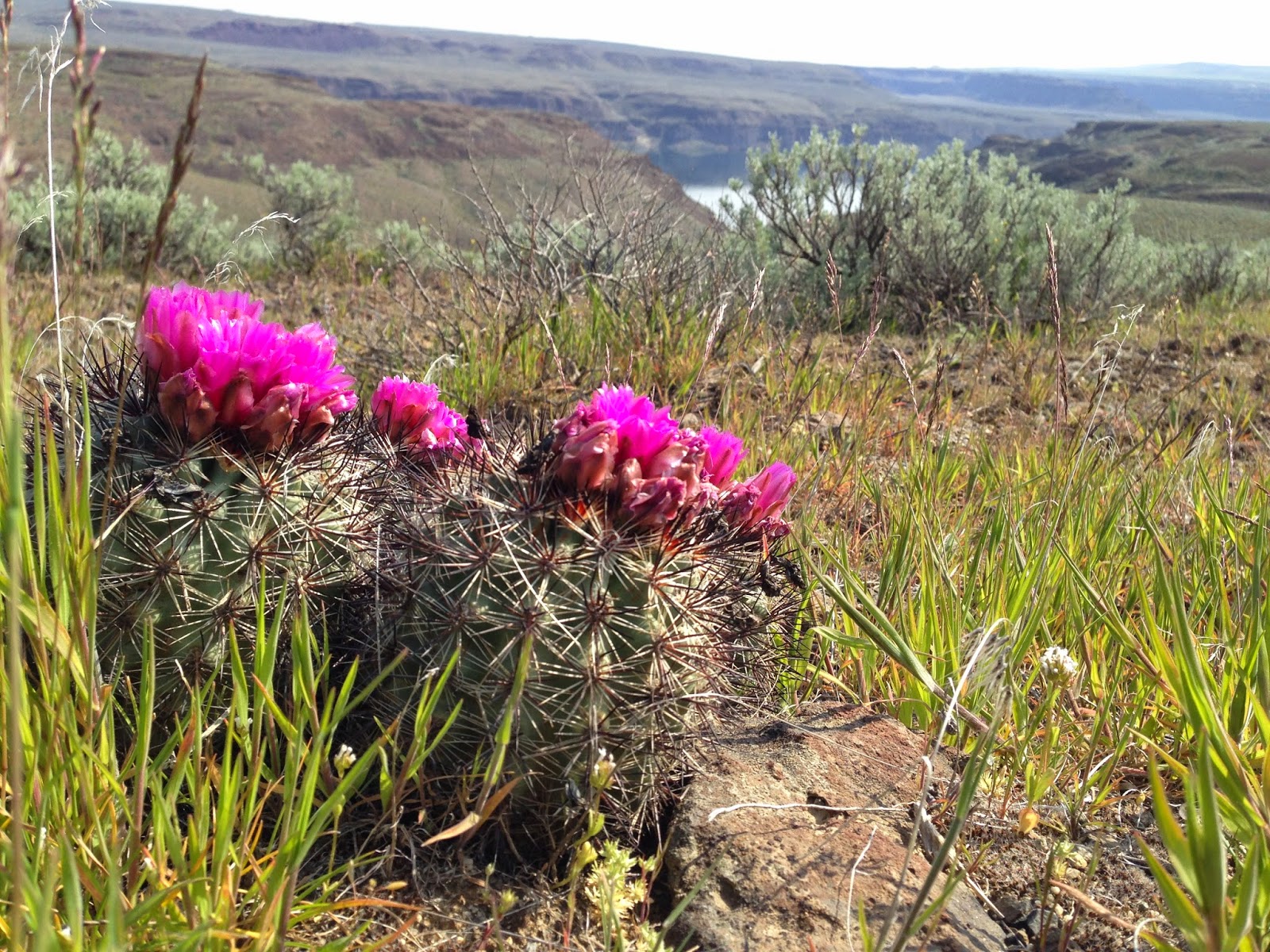 I was above Skookumchuck Creek which leads down to Scammon Landing.  It's a long way down. 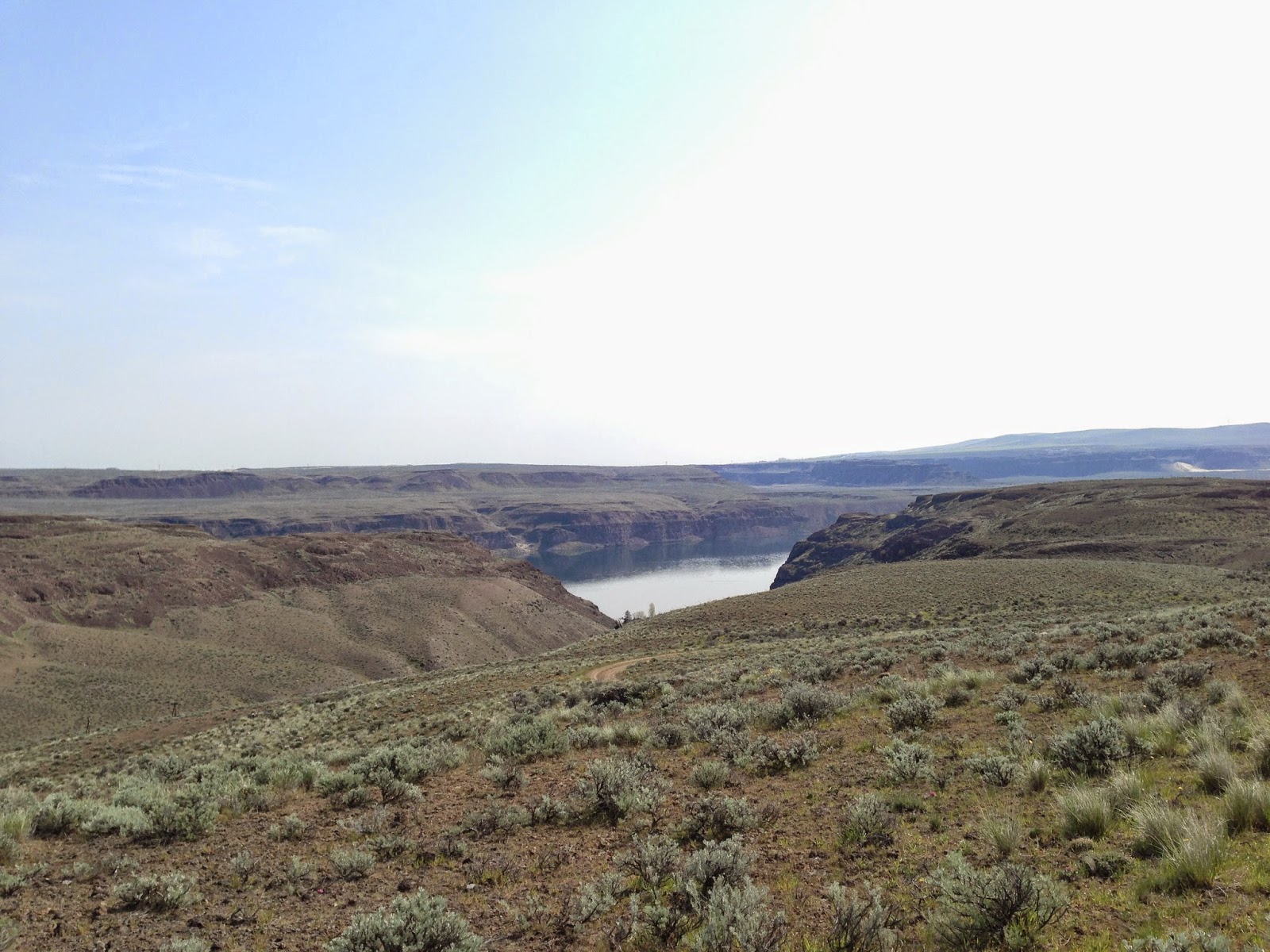 I mean it's a real long ways down. 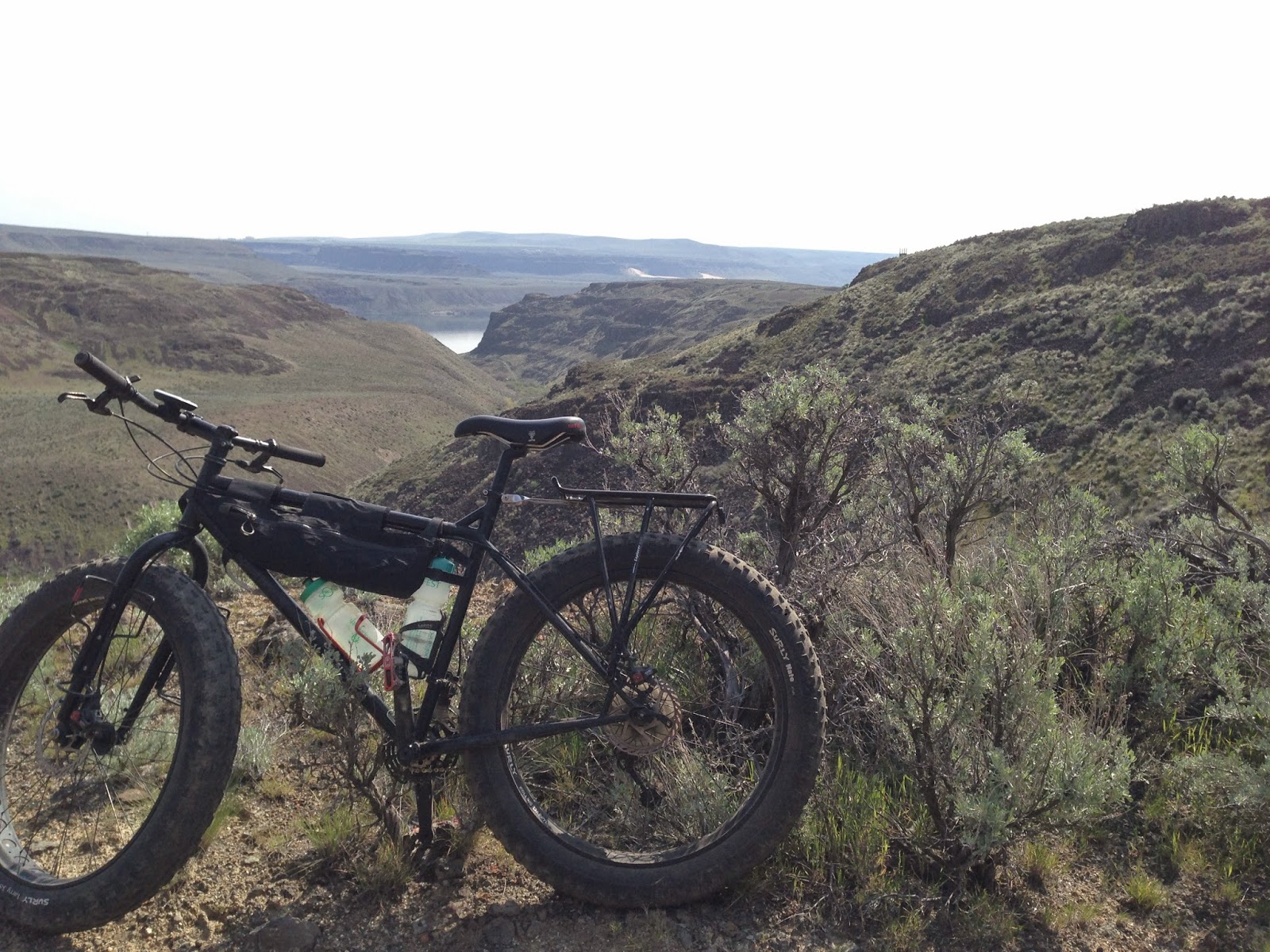 I was tempted to ride down to check it out, but had no desire to climb back up that.  It was getting near noon, my self-appointed turnaround time.  I headed back, because I wasn't sure how long the return ride would take.
I rode back the same way, and it didn't take as long as I feared.  (Edit to add: Climbing seemed harder than it should be and I remembered I had lowered the saddle over winter.  Raised it up a bit, got some more leg extension and that seemed to help.  Amazing what a difference an inch can make.) Took some long rest stops to ruminate among the ungulates (ok didn't really see any), but most of the uphill was less steep than the ride up from Rocky Coulee.  And that was the best part - the last few miles were an easy downhill. Oh yeah and no mud!

I got back to the truck with plenty of time to check out another trail head, but instead headed home.  I felt like I had a better feel for the lay of the land and roads in the Whiskey Dick Wildlife Area and could find my way around now. I think.

Fat Flat update: I'd pulled a thorn out of my back tire after the last trip (Up the Big Muddy Q). Patched the tire and the next morning it was flat. Pulled the tire off again, carefully checked for more thorns and found it was leaking from under the patch. Torn off the Skab patch and used a Park Tools patch.  Same thing the next day. Did it again.  Thought about replacing the tube, but I wasn't going to give up that easily. Was going to try one of the more permanent patch types, but the rubber cement tube was empty.  Put another patch overlapping the other one, since I thought part of the problem might be it was a larger hole in the tube than these patches were meant to fix. Found an old bottle of Slime in the garage and poured it in the tube, pumped it up and crossed my fingers.  That seemed to work, as no flats this trip!