Sorry about that title.

Recently I became proud member #148 of the Society of Three Speeds: 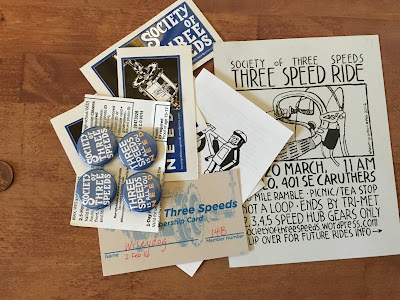 Shawn over at SoTS was having a sale on memberships because he was getting new membership kits together and the old ones had to go. And the membership price was going up, and cheap bastard that I am, I jumped on it.  One of the 3 club rules is to have a 3-speed, or to obtain one posthaste.  Luckily, the Spokane Bike Swap is coming up April 9, and there's also some spots in town where I can procure one.

If you haven't already, take a look at Shawn's other blog, Urban Adventure League.  I like its premise:
The Urban Adventure League hosts various events that explore the urban environment using feet, bicycles, public transit, and possibly other alternative forms of transport.  There's the great idea of urban bike Rambles. You may have also seen some of his comics in Bicycle Times.

Now to figure out where to hide another bike.